Police will close some city streets to accommodate a surge in outdoor dining in Melbourne this New Year's Eve, as officers are handed extra powers to search revellers for weapons in high-risk coastal areas across Victoria.

Cracking down on illegal fireworks will also be high on the force's radar as much of the state prepares to celebrate New Year's Eve without government-funded fireworks or packed dance floors because of coronavirus restrictions. 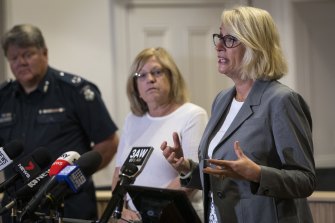 Victoria Police Assistant Commissioner Luke Cornelius said the public can expect to see thousands of front-line officers on patrol, including at popular holiday destinations, as Victorians prepare to send off 2020.

"Victorians have shown how resilient they are this year, and we look forward to safely bringing in the new year with the community in our cities, towns, coastlines and popular holiday destinations," he said.

"There will be a strong and dedicated police presence right across the state to ensure celebrations are kept safe and people who make it unsafe, or harm others are held to account."

Mr Cornelius said police will be given additional search powers under the Control of Weapons Act to search people suspected of carrying weapons in designated areas including Melbourne's CBD, the St Kilda foreshore, Mornington Peninsula, the Surf Coast and Phillip Island.

Specialist squads, including the air wing, dog squad, public order response team, mounted branch and water police, will also be called in to support police patrols with mobile protective service officers (PSOs) to be on trains and trams and at train stations around Melbourne and in key areas across the state, including Geelong, Ballarat, Frankston, Bendigo and Traralgon.

Mr Cornelius said with no fireworks in the CBD this year, police were "very keen to discourage large crowds" forming on city streets.

"We'll be having a significant, visible and active presence, not only here in the city but also on the beaches, down around the bayside area and pushing down the Great Ocean Road," he said.

"We will take the opportunity, where it’s appropriate, to take action, where there are flagrant breaches of the [Chief Health Officer's] directions. We will fine people."

Victorians should prepare for road closures, with streets to be closed off across Melbourne's CBD, Southbank and some suburban and regional areas to allow for more outdoor dining where public celebrations are being held, the senior officer said.

The state government has urged Melburnians not to enter the CBD unless they have a venue booking, with a "very heavy police presence" flagged on the city streets.

"Anyone thinking of coming into a city, town or celebration anywhere in the state to cause trouble – our advice is simply don't. You will be arrested and you will be held to account," Mr Cornelius said.

"Make sure you plan ahead and work out how you are going to get to and from your destination – it would be devastating to think that someone might not make it to 2021 because of a bad decision made on New Year's Eve."

The Melbourne CBD will be divided into 11 precincts, with traffic blocked and diners spilling out onto roads and laneways for New Year's Eve and New Year's Day.

Melbourne lord mayor Sally Capp said tickets were still available for the city’s Street Feasts celebrations, and it was a chance for people to support the city's hospitality industry. Ordinarily, there would be 400,000 people flooding the CBD for the New Year’s Eve fireworks.

"We're asking everybody for their co-operation so that we have a safe New Year's Eve, and so we can continue into 2021 on the great work of suppressing the virus," Cr Capp said.

"We do want people to celebrate. It's natural and understandable at the end of a difficult year.

"You can spread out family celebrations … it takes the pressure off a sense of crowds gathering in big numbers and takes pressure off all of our systems."

"We have done the hard yards this year, so we can not risk the work we have done this New Year's Eve by gathering, by breaking the rules," Ms Neville said.

"The health advice is clear: only come to the CBD if you have a booking at a restaurant, don't come in and wander around the CBD, don’t hang out in big groups."

Ms Neville said it was also important for Victorians to take caution when travelling by car, with six deaths on the roads over the Christmas period.