CLINT, Texas — A delegation of Democratic members of Congress traveled to the U.S. border with Mexico on Monday to tour migrant detention facilities and decried the “inhumane conditions” they found.

Citing crowded cells, a lack of running water and detainees with serious medical conditions who did not have access to medicine, the group attempted to hold an afternoon press conference to detail what they’d witnessed, but faced vitriol from members of the Border Patrol on social media and from protesters who support President Trump.

“We came today and we saw that the system is still broken and that peoples’ human rights are still being abused,” said Rep. Joaquin Castro, D-Texas, chair of the Congressional Hispanic Caucus.

Castro and other members of the group spoke to reporters outside of a Customs and Border Protection facility where some migrants are being held. While inside, Castro said, he met a woman who “said that she was told by an agent to drink water out of the toilet” due to the lack of running water.

Rep. Judy Chu, D-Calif., said she was haunted by what she saw at the facilities.

“I will never forget the image of being in a cell and seeing 15 women, tears coming down their faces as they talked about being separated from their children, about having no running water and about not being able to know when they were going to get out since they’d already been there … 50 days,” Chu said.

Customs and Border Protection did not immediately respond to a request for comment on this story. 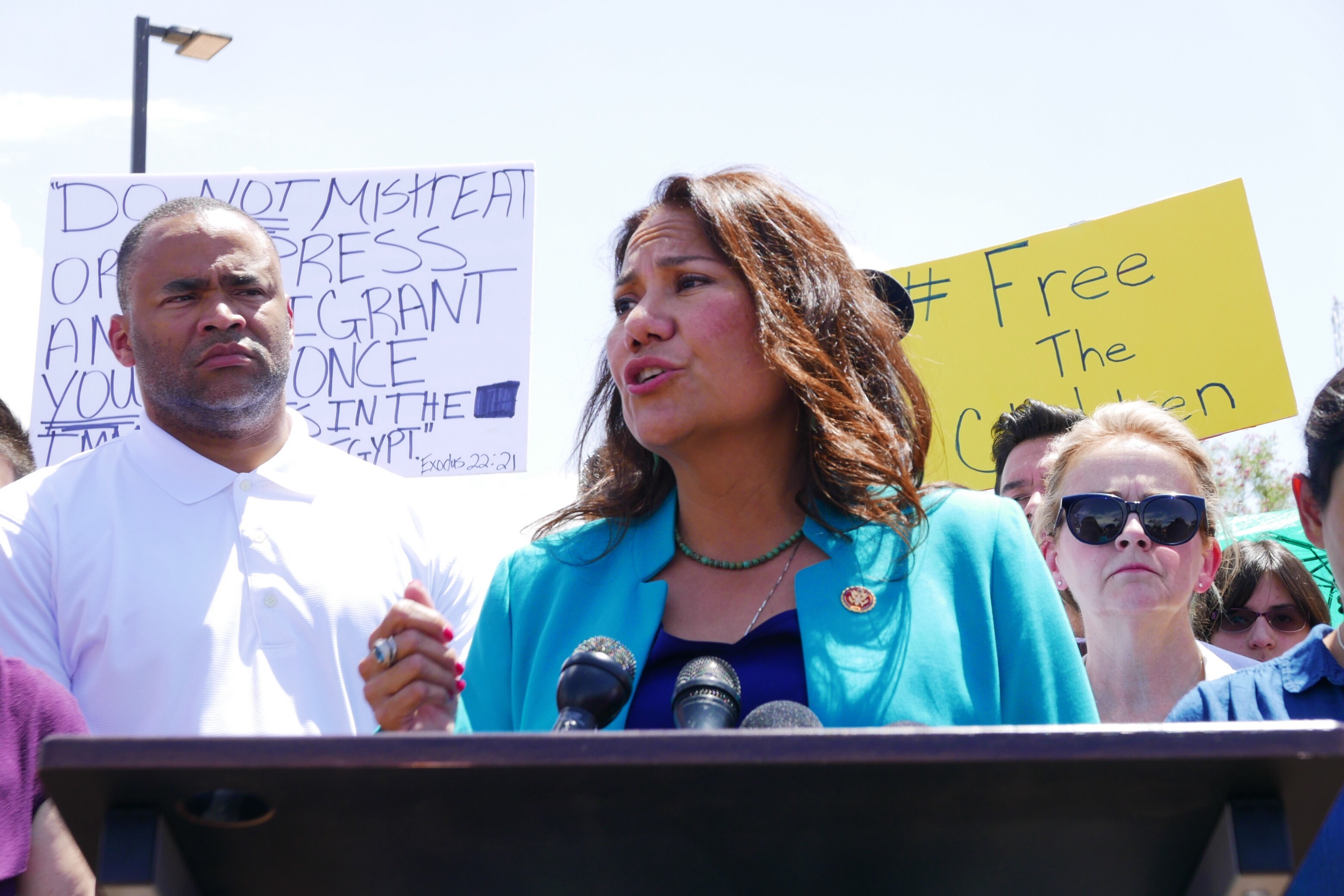 Rep. Alexandria Ocasio-Cortez, D-N.Y., described the things the Democrats witnessed during their visit as “unconscionable.”

Early Monday morning, before the group of lawmakers began their tour, NBC News published details of a report from the Department of Homeland Security’s Office of the Inspector General that described conditions at one border station in El Paso as “chaos.” The report, which contained details of an inspection that was conducted last month, described detainees kept in standing room only conditions for days. According to the report, conditions were so bad that Border Patrol agents feared rioting or hunger strikes could break out. The report called the situation unsafe for both the migrants and the agents.

Pro Publica also published a report Monday describing a secret Facebook group for current and former Border Patrol agents where members mocked migrants. Posts in the group also made vile sexual jokes about two of the members of the Democratic delegation, Ocasio-Cortez and Rep. Veronica Escobar, D-Texas, after they announced plans for the visit. According to Pro Publica’s A.C. Thompson, the media outlet was “able to link the participants in those online conversations to apparently legitimate Facebook profiles belonging to Border Patrol agents.” In the wake of the report, a CBP spokesperson said the DHS inspector general would be investigating the group.

At the facility in Clint, Castro said he also hoped there would be a congressional investigation into the group.

“That was a vulgar, disgusting, and vile page that shows, unfortunately, that there are many within CBP who have become desensitized to the point of being dangerous to the migrants in their care and to their co-workers,” Castro said.

Escobar, who was the subject of some of the jokes on the page, described the social media posts and the things the Democrats said they witnessed as evidence of “a dehumanizing of people that is very dangerous to our country.”

“It’s very dangerous and the minute that we lose our own humanity, we’ve gone into our very dark place,” Escobar said. “Unfortunately, our country has gone to a very dark place.” 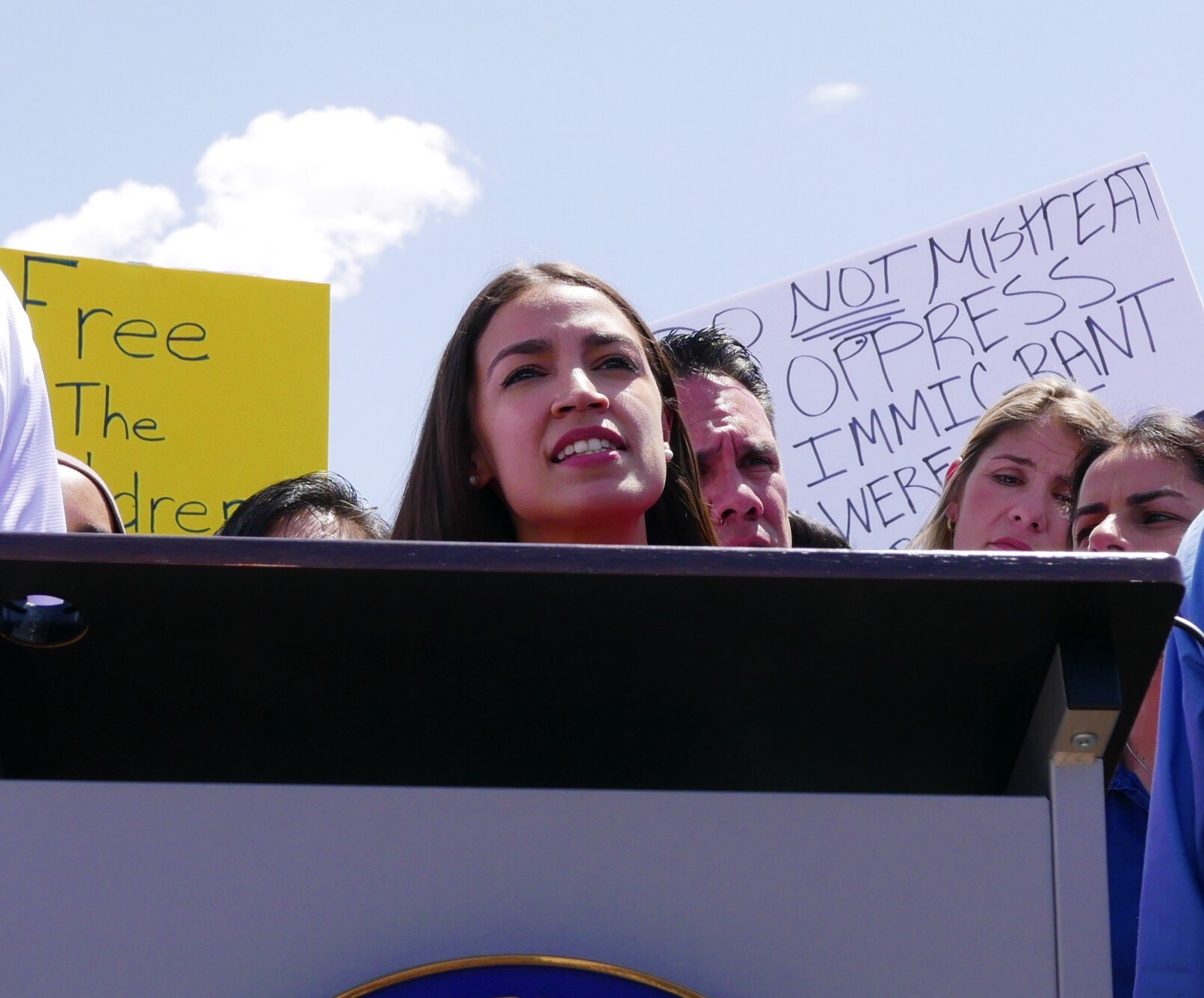 A group of Trump supporters gathered at the facility in Clint shouted throughout the press conference with the visiting Democrats. When Escobar spoke, the protesters yelled vulgarities in Spanish at her.

Some of the Democrats addressed the protesters directly.

Rep. Rashida Tlaib, D-Mich., who became the second Muslim woman in Congress when she was elected last year, also spoke to the protesters.

As Tlaib addressed the crowd, some of the protesters yelled about Muslims.

“Shut up! We don’t want Muslims here either,” one said.

“We care about Jesus Christ! We don’t care about Sharia law,” shouted another protester.

Tlaib spoke over them and defended Escobar, who had also been subjected to insults during the event. Ocasio-Cortez touched Tlaib’s shoulder as her voice roared.

“I will tell you this, Veronica Escobar is the best goddamn Congress member from this district! You all can say whatever you want, but this woman cares about those children,” said Tlaib. “And you all can outscream me, but I will never stop speaking truth to power.”

Afterwards, Escobar told Yahoo News that she blamed the president for the rhetoric that was directed at her during the event and on the Facebook page.

“It brings me a lot of pain that the humanity of the United States is disappearing, and this is the fault of President Trump,” Escobar said in Spanish. “He needs to raise the level of the discourse in this country and what we have seen in our country unfortunately is insults and shouts. This was an example of that.”

But Escobar said she would not hesitate to continue speaking up about the conditions faced by migrants — particularly children.