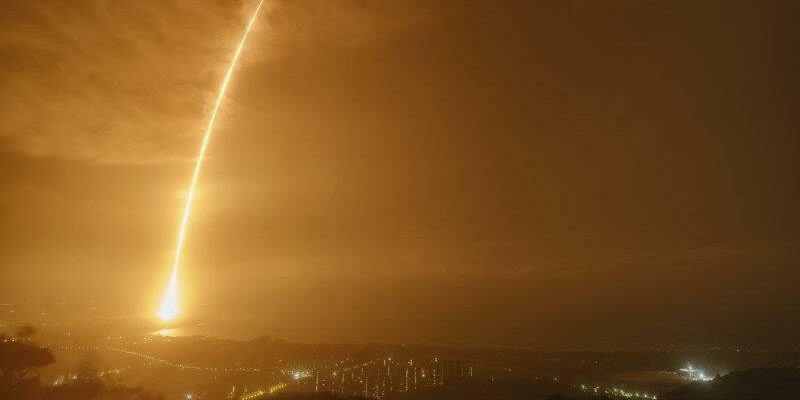 Washington: China’s latest launch of a huge rocket is, once again, raising alarm that the debris will crash into the Earth’s surface in an uncertain location and at great speed.

On Sunday afternoon local time, the Long March 5B blasted off from the Wenchang launch site on the southern island province of Hainan, carrying a solar-powered new lab, the Wentian experiment module, to be added to China’s Tiangong Space Station. 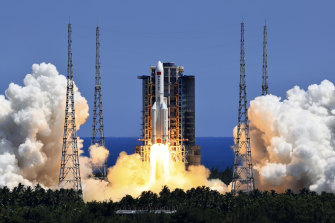 But size of the heavy-lift rocket – it stands 53.6 metres tall and weighs 837,500 kilograms – and the risky design of its launch process have led experts to fear that some debris from its core stage could fail to burn up as it reenters Earth’s atmosphere.

As with two previous launches, the rocket shed its empty 23-tonne first stage in orbit, meaning that it will continue to loop the Earth over coming days as it gradually comes closer to landing. This flight path is difficult to predict because of fluctuations in the atmosphere caused by changes in solar activity.

Although experts consider the chances of debris hitting an inhabited area very low, many also believe China is taking an unnecessary risk. After the core stage of the last launch fell into the Indian Ocean, NASA Administrator Bill Nelson said China was “failing to meet responsible standards regarding their space debris,” including minimising risks during reentry and being transparent about operations.

China rejects accusations of irresponsibility. In response to concerns about last year’s launch, the Chinese Foreign Ministry said that likelihood of damage was “extremely low”.

Before the launch, Jonathan McDowell, an astronomer at the Centre for Astrophysics who closely tracks space launches, wrote on Twitter that he had hoped China would have adopted a new design to allow the core stage to be actively deorbited.

Late on Sunday, McDowell added that US Space Command orbital data about two objects from the launch had confirmed that the core stage “remains in orbit and was not actively deorbited”.

Many scientists agree with China that the odds of debris causing serious damage are tiny. An article published in the journal Nature Astronomy this month put the chance that, under current launch practices, someone would die or be injured from parts of a rocket making an uncontrolled reentry at 1 in 10 over the next decade.

But many believe launch designs like the Long March 5B’s are an unnecessary risk. “Launch providers have access to technologies and mission designs today that could eliminate the need for most uncontrolled re-entries,” the authors wrote. They proposed global safety standards mandating controlled reentry.

Although it lags the United States in many respects, China’s spaceflight program has achieved many symbolic victories over the past decade under Chinese President Xi Jinping’s plan to build the nation into a space power, including placing the Tiangong Space Station in orbit last year.

The successful docking of the Wentian experiment module on Monday means its orbital outpost is only one more addition away from completion, with the final module expected to be launched later this year. There are three Chinese astronauts on the station.

The rapid increase in space activity has raised concerns of an emerging space race – and the risk of a damaging and geopolitically destabilising accident caused by poor communication between nations. Cooperation between China and the United States in space has been minimal since the 2011 Wolf Amendment that banned NASA from using government funding to work with the Chinese government.

The prospect of international collaboration has been further undermined by China’s growing partnership with Russia, which Beijing says remains strong despite President Vladimir Putin’s invasion of Ukraine. The two last year announced plans to jointly build a research outpost on the moon.