Washington: US President Donald Trump met with top national security officials on Friday to review near-final plans for withdrawing US troops from Afghanistan.

The prospect has already prompted fierce political debate but could offer Trump a compelling talking point for his 2020 reelection campaign. 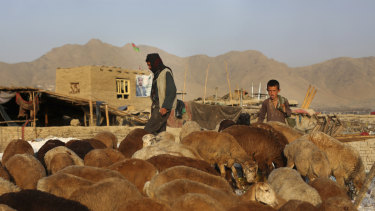 An Afghan shepherd boy tends his sheep in Kabul, Afghanistan.Credit:AP

The president and his advisers gathered at his golf club in New Jersey to assess a deal reached with Afghan insurgents by his special envoy for Afghanistan, Zalmay Khalilzad, during several weeks of negotiations in Qatar.

Trump is a longtime sceptic of the United States' 18-year military presence in Afghanistan and campaigned against expensive foreign interventions.

His decision point on Afghanistan, and the widespread belief that he is impatient to begin a withdrawal before the next election, has already kicked off an argument in Washington about whether an exit would amount to a premature retreat or a crucial step toward long-overdue peace. 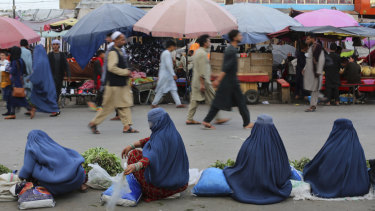 Women selling vegetables wait for customers at a market in Kabul, Afghanistan.Credit:AP

That debate scrambles partisan lines, with some prominent Republicans warning that leaving would be reckless, while top Democrats applaud the idea of concluding the war in Afghanistan, a goal that eluded President Barack Obama.

For Trump, initiating a departure from Afghanistan would allow a president who once promised to "bomb the hell out of" terrorists and has spoken of wiping Afghanistan "off the face of the earth" to present himself as a peacemaker.

That could be particularly useful at a moment when his nuclear diplomacy with North Korea has achieved little tangible promise and his "maximum pressure" campaign against Iran has failed in its goal of bringing Tehran to the negotiating table, said Vali Nasr, a professor of international relations at the Johns Hopkins University School of Advanced International Studies.

"This is as close as Afghanistan has been to a political settlement to end this war," Nasr said. "I do think if a deal is signed, Trump says that we can talk to our enemies and we can cut a deal with them. And to actually get a deal with the Taliban may domestically compensate for the lack of a deal with North Korea or Iran." 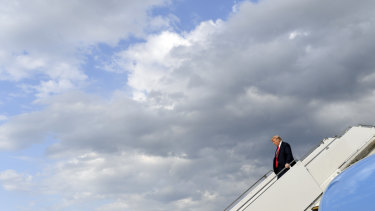 US President Donald Trump walks down the steps of Air Force One.Credit:AP

But sceptics of the agreement — which has not been finalised and could still fall apart or be rejected by Trump — fear it is meant more for the American political calendar than for the complex realities of the Afghan conflict and the enduring terrorist threat against the United States, and warn that it could end in disaster for both countries.

"The withdrawal is coming. It's not a matter of if, it's a matter of when or how fast," said Thomas Joscelyn, a senior fellow at the Foundation for Defence of Democracies. "My sense of it, though I can't prove it, is that it's all over with by Election Day 2020."

Several people familiar with the agreement say that it provides for the phased withdrawal of thousands of US troops from Afghanistan, likely in a first step of 5000, over a period of about two years or less.

In exchange, the Taliban would renounce ties to international terrorism and promise not to harbor or assist groups like al-Qaeda or the Islamic State.

That would address what has long been the United States' stated mission in the country: to prevent Afghanistan from becoming a home base for terrorists who want to strike the West.

Sceptics say it is naive to trust Taliban assurances. Joscelyn insisted that a potentially fatal flaw would be a failure to ensure that the Taliban, which he said have perfected "weasel" language, specifically name groups that they will shun.

Another person familiar with the draft agreement said that had been a sticking point in the negotiations. But defenders of the deal say any withdrawal would be conditioned on the Taliban delivering on their promises.

Among those meeting with Trump on Friday in Bedminster, New Jersey, where he is spending a working vacation, were Vice President Mike Pence; Secretary of State Mike Pompeo; Secretary of Defense Mark Esper; John Bolton, the national security adviser; and Gen. Joseph Dunford, the chairman of the Joint Chiefs of Staff.