The dance troupe that performed a twerking routine at a navy ceremony in Sydney over the weekend has hit out at the ABC for “deceptive” and “creepy” editing of its performance.

The 101 Doll Squadron has deleted its social media pages following criticism and widespread media coverage of their dance at the launch of the navy’s latest ship, HMAS Supply. 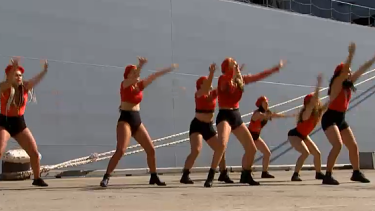 101 Doll Squadron performing at a navy event on the weekendCredit:ABC News

In a statement, the squadron said the ABC edited the dance to make it appear that dignitaries, including Governor-General David Hurley, were part of the audience watching the routine.

“The 101 Doll Squadron members have been under personal attack on all media platforms since the weekend and we now feel unsafe,” the statement said.

“The media which purports to support women have been the most virulent.

“We are very disappointed at the ABC’s deceptive editing of their video piece which cut to guests and dignitaries who were not in attendance and shooting from angles which could not be seen by the audience.

“We found this very creepy and reflects more on the ABC’s camera operator and their need to sexualise these women and their dance piece for their own gratification.

“These are the images appearing in the media and the ABC have a lot to answer for in making us feel threatened and exploited.”

On Thursday afternoon, the ABC issued a correction for the original video of the performance.

It said the reporting team initially believed both the Governor-General and the Chief of Navy were present at the time of the performance.

“This was incorrect. While the Chief of Defence was present, the Governor-General and the Chief of Navy in fact arrived after the performance,” the correction read.

“The video should not have been edited in that way and the ABC apologises to the Governor-General and the Chief of Navy, and to viewers, for this error.”

The statement said the reporting was amended after Defence confirmed the Governor-General and Chief of Navy had arrived after the performance.

“The ABC’s footage of the dance performance was shot in a standard manner, from the same position as other parts of the ceremony,” the correction said.

Prime Minister Scott Morrison said he was disappointed the event was misreported by the ABC.

“I think this was disrespectful to the performers,” he said.

“To suggest the Governor-General or others were in attendance there in that way I think was dishonest.

“I think the standards have failed and so I think Defence will look at these matters and make whatever changes they wish to in the future.“