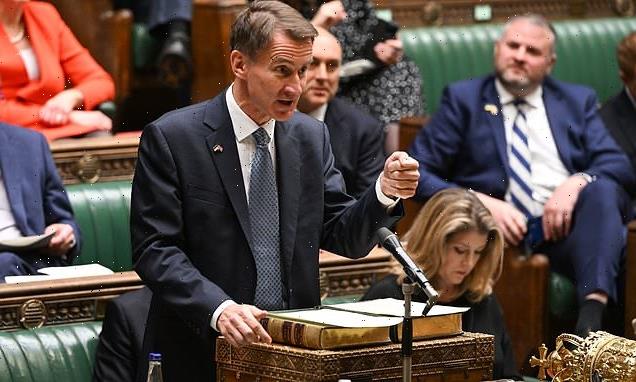 DAILY MAIL COMMENT: A Budget to break the back of Middle Britain

If the Tory Party stands for anything, surely it is for the virtues of hard work, aspiration and prudence.

As all good Conservatives know, individuals spend their money more wisely than the State. And taxes are a necessary evil which should be kept to the barest minimum.

So it’s profoundly depressing that Jeremy Hunt’s Autumn Statement defied each one of those fundamental principles.

Of course, the Mail understands the need to repair the public finances. After the astronomical borrowing binge during Covid, the global economic slump and higher costs fuelled by the war in Ukraine, our balance sheet is covered in red ink. 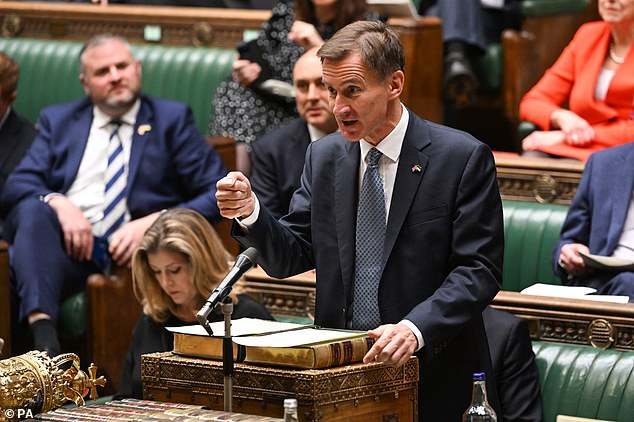 But it’s a grotesque overreaction for the Chancellor to saddle us all with the biggest tax burden ever known in peacetime.

And in a move straight out of Gordon Brown’s playbook, the biggest losers will be the hard-pressed families of Middle Britain.

Traditionally they are bedrock Tory voters. After this, many will inevitably wonder if there’s any point voting for the party at the next election.

With sky-high inflation eating away at disposable income, and wages taking a substantial hit, they face the biggest fall in living standards in post-war history.

By extending by stealth the freeze on income tax thresholds, Mr Hunt is dragging millions more workers into taxation for the first time or into the higher bracket.

The 40p rate was once a levy on the well-off. But it has been transformed into a blunt tool for the Treasury to clobber those on modest incomes – NHS staff, teachers, police officers and tradesmen among them.

It’s also deeply dispiriting that the Tories are plundering other taxes. The level at which the 45p income tax rate kicks in will be slashed, while inheritances, capital gains and dividends will all be raided.

Mr Hunt may be relaxed about aping Labour’s threadbare class war policies. But penalising strivers, who are guilty of nothing more than trying by their own efforts to improve their lot in life, risks pouring sand into the gearbox of the economy.

This assault on middle earners might in the short term calm fickle markets. But where is it leading? Hiking taxes and freezing allowances will kill initiative and stifle growth.

One of the biggest failings in the British economy is low productivity. Yet this Budget is a positive disincentive for workers.

Why should someone work extra hours or endeavour for promotion if the Government is going to enjoy most of the fruits of their extra labours?

Mr Hunt is clear the public want ministers to make tough decisions to drag the country out of the mire. But the way to do that is to make our economy more dynamic, not more static. The engine of recovery is grafting, aspirational Middle Britain.

Even if Liz Truss’s solution to the economy’s problems was hopelessly flawed in execution, her tax-cutting, high-growth agenda was the right path to prosperity.

It’s also disturbing that there will be no significant spending cuts until 2025 (by which time Britain may well have a Labour government). In the meantime, vast sums will keep being poured into the NHS without any meaningful plan for reform.

It’s simply wrong that the ever-bloated State continues gorging itself on the productive, wealth-creating parts of the economy. Britain now needs a positive mindset, not hand-wringing defeatism. Mr Hunt can leave such pathological negativity to Labour.

Yes, we may be in a crisis but we’re no worse off than the rest of the developed world. We will be if he soaks the families and businesses that could spark our renaissance.

It’s all very well saying those with the broadest shoulders should carry most of the burden, but they already do.

They are the workhorses that keep the British economy going. Mr Hunt needs to be careful he doesn’t break their backs.