New York: Afghanistan is “hanging by a thread”, with millions of people suffering extreme hunger, and education and social services on the brink of collapse, UN Secretary-General Antonio Guterres told the Security Council on Wednesday.

“We need to suspend the rules and conditions that constrict not only Afghanistan’s economy, but our life-saving operations,” he said. “At this moment of maximum need, these rules must be seriously reviewed.” 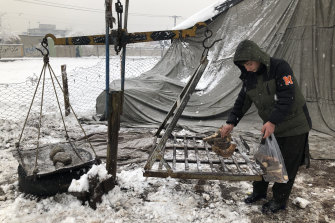 A few sticks of firewood, weighed on a scale and sold for half a dollar, are all that the family of this boy and many others can afford to heat their homes in Kabul.Credit:Pamela Constable/Washington Post

He said a lack of liquidity was limiting the capacity of aid agencies to reach people in need.

“We need to give financial institutions and commercial partners legal assurance that they can work with humanitarian operators without fear of breaching sanctions,” Guterres said, who added that daily life in Afghanistan had “become a frozen hell” for people living there.

Some $US9.5 billion ($13.2 billion) in Afghan central bank reserves remain blocked outside the country and international support given to the previous government has dried up since the Taliban seized power in August.

“We need to jump-start Afghanistan’s economy through increased liquidity. We must pull the economy back from the brink. This means finding ways to free up frozen currency reserves and re-engage Afghanistan’s Central Bank,” Guterres said.

In December, donors to a frozen World Bank-administered Afghan Reconstruction Trust Fund agreed to transfer $US280 million to the World Food Program (WFP) and UN children’s agency UNICEF to support nutrition and health in Afghanistan.

“We need the remaining $US1.2 billion to be freed up urgently to help Afghanistan’s people survive the winter,” Guterres said. “Time is of the essence.”

The United Nations earlier this month appealed for $US4.4 billion in humanitarian aid for Afghanistan in 2022. On Wednesday, it said it needed a further $US3.6 billion for health and education, basic infrastructure, promotion of livelihoods and social cohesion, specifically the needs of women and girls.

The United Nations has pledged to work with countries to ensure that funds are not diverted or misused, but the UN special envoy on Afghanistan, Deborah Lyons, noted on Wednesday that there was still reluctance among donors to free up funds.

“It is clear that donors, who face their own domestic constituencies, are still not satisfied with the political progress in Afghanistan and are watching closely for encouraging signals,” Lyons said.