The CSIRO has opened a new facility in Clayton to make vaccines quickly for clinical trials, which the organisation hopes will fill a missing link in Australia’s pandemic preparedness.

The $23.1 million National Vaccine and Therapeutics Lab, officially opened on Thursday, can turn vaccines developed by university labs into high-quality products that can be given to humans in clinical trials. Previously that work had to often be done offshore. 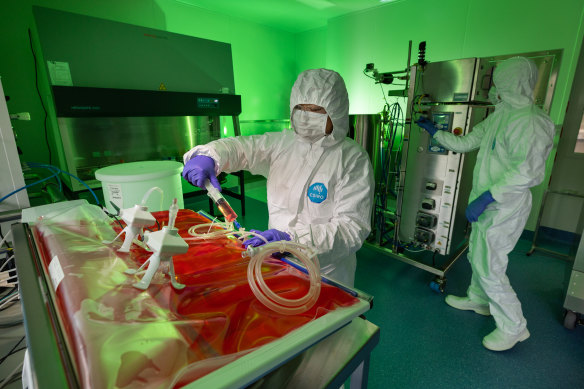 “This means when we have another epidemic or pandemic, we would be able to rapidly take multiple candidates through from the lab bench to a phase 1 trial,” CSIRO’s research director for biomedical manufacturing, Professor Susie Nilsson said.

“It’s essentially getting a candidate across that valley of death,” she said.

When COVID-19 emerged, researchers and industry had to scramble in Australia to manufacture vaccines for testing. The CSIRO quickly repurposed a tiny lab in Clayton, where 10 staff worked around the clock for weeks to scale up the University of Queensland’s COVID-19 vaccine.

“It was super-exciting, but super-intense,” said Nilsson. With extreme effort, they succeeded. But the experience confirmed the need for Australia to expand its ability to make vaccines, both for this pandemic and the next.

The new biosecurity level-2 facility sits behind a series of airlocks; workers have to dress in full suits to go inside. “This place is cleaner than an operating theatre,” said John Power, group leader of regulated biomanufacturing.

The lab makes protein and viral vector vaccines – the technologies used in Novavax and AstraZeneca’s jabs. The vaccines are grown by vast armies of cells housed in huge steel vats known as bioreactors.

The cells are given the genetic code for what needs to be produced: a viral protein perhaps, or even a whole antibody. They churn the product out en masse, before it is filtered out, purified, and filled into vials.

The genetically-modified cells arrive frozen in a tiny vial at Clayton; the team carefully thaw them and then grow them to up to 200 litres.

The process is like tending to a plant – the researchers carefully tweak temperature and oxygen levels to get the cells to grow at their best.

When CSL was making the AstraZeneca vaccine, these processes hadn’t been perfected, leading to the first batch of vaccine being lower than was expected. CSIRO’s lab will specialise in perfecting that process before it goes into large-scale manufacture.

“If we get another pandemic, we should be in a much better place,” Nilsson said.

The facility also comes with machinery to fill vaccines into vials, ready for use in clinical humans.

Facilities like this exist in Australia but are generally only for large runs.

The facility can do both vaccines and drug therapies. It is already working on an antibody therapy for a university researchers declined to name.