Crown Resorts faces a fine of up to $100 million over its illegal practice of accepting Chinese bank cards to withdraw funds for gambling at its Melbourne casino.

The Victorian Gambling and Casino Control Commission (VGCCC) said on Tuesday it would start disciplinary proceedings against Crown over the fraud, which involved disguising up to $160 million of gambling transactions as hotel expenses between 2012 and 2016. 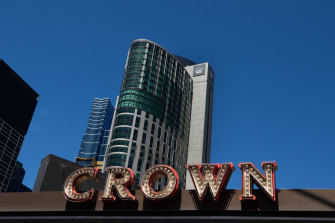 The so-called “China UnionPay process” emerged at Victoria’s royal commission into Crown, which ruled it was unfit to run its flagship casino and gave it two years to reform or lose its licence.

Designed to skirt around China’s restrictions on moving capital out of the country, the practice breached Victorian laws banning selling gambling chips on transactions using debit or credit cards, as well as the requirement for Crown to keep accurate records.

The James Packer-backed Crown could be fined up to $100 million after the Victorian government last year increased the maximum penalty the gambling regulator could impose from $1 million following the explosive royal commission.

VGCCC chair Fran Thorn said she welcomed the harsher fines, which were necessary to “deter Crown from engaging in the conduct that was revealed during the royal commission”.

“As a first step, we are acting on the royal commission’s findings that Crown’s China UnionPay process breached important Victorian regulatory obligations, was illegal and constituted serious misconduct,” she said.

A NSW inquiry under way into Crown’s main rival, The Star Entertainment Group, heard last month that the Sydney-based group engaged in an identical fraud by disguising $900 million in China UnionPay gambling transactions as hotel expenses.

A Crown spokeswoman said the company had “acknowledged the seriousness of its failings” over the UnionPay scam, which it ceased in 2016.

“Crown’s priority remains delivering on its reform and remediation program to ensure Crown delivers a safe and responsible gaming environment,” she said.

Crown is also facing a separate fine, which could be in the hundreds of millions, from the financial crimes watchdog AUSTRAC, which last month launched court action over the casino’s system failure to combat money laundering.