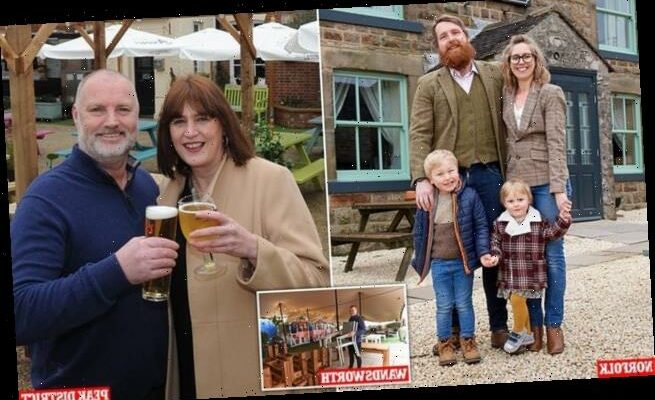 The marquees are going up ready for Alfresco April: Creative pubs are ramping up plans for spring reopening in 36 days’ time

Creative pubs are ramping up their plans for an Alfresco April ahead of thousands opening up in 36 days’ time.

Publicans are already assembling marquees, revamping car parks and even creating a fake beach for thirsty revellers to make their long-awaited return.

Industry experts predict about 40 per cent of pubs will reopen when drinking outside is permitted on April 12, with the remainder turning on their taps from May 17.

Emma McClarkin, chief executive of the British Beer and Pub Association (BBPA), said: ‘While we still have a long way to go, Brits across the UK cannot wait for that first pint of fresh draught beer in their local beer garden but also the opportunity to reconnect with their community.

‘It will be a moment to savour and cannot come soon enough.’ 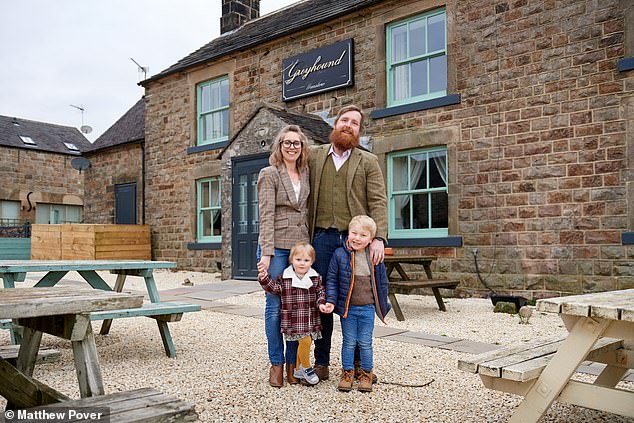 Creative pubs are ramping up their plans for an Alfresco April ahead of thousands opening up in 36 days’ time. Pictured: Husband and wife Lee and Jenni Wilson-Hart outside The Greyhound Inn Warslow, that they run, in Derbyshire Peak District National Park, with their children Jacob, 4 and Caitlyn, 2

The award-winning Greyhound Inn in the historic village of Warslow, Staffordshire, plans to host a big party to celebrate the 70th anniversary of the creation of the Peak District National Park.

Landlord Lee Wilson-Hart, 35, who runs the pub with his wife Jenni, 31, said: ‘We plan to recreate our centuries-old village traditional fete that died a few years ago.

‘There will be a village brass band, floats and plenty of other things for people to enjoy. After being in considerable darkness for some time, we think it’s time to show people some light and celebrate we have prospered through it.’

Lockdown has been a hammer blow for the hospitality industry, and a report by data analysis firm CGA said that 1,749 pubs closed for good in January this year alone.

The BBPA welcomed Rishi Sunak’s freeze on beer duty last week and the Chancellor’s £400 million investment in pubs but there are warnings that many small establishments could still fold without longer-term support.

From Monday, April 12, in England, six people or two households will be allowed to drink in pub gardens while takeaway beers will also now be allowed.

The Government has also slashed red tape, extending pavement licences for another 12 months, so businesses do not have to reapply again.

The owners of The Ingate pub in Beccles on the Norfolk Broads have spent £42,000 in the past year to transform the car park into a new garden area with TV screens showing live sport.

Landlady Michelle Payne, 49, who bought the community pub with husband Trevor, 53, in 2017, said: ‘We will most certainly be opening our doors on April 12.

‘We would have chaos and rebellion from the customers and people if we didn’t.

‘We are working daily to get the pub ready. All our staff will all be returning, thanks to the support from Dishi Rishi, we have managed to retain them all and cannot wait to see them again.

‘Boris and Rishi can come for a drink anytime.’ 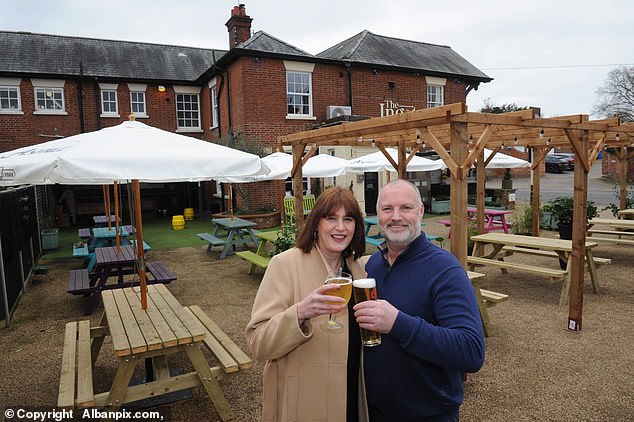 Publicans are already assembling marquees, revamping car parks and even creating a fake beach for thirsty revellers to make their long-awaited return. Pictured: Michelle and Trevor Payne have transformed the car park of their pub, The Ingate Freehouse, in Beccles, Suffolk, into a garden with pergolas, TVs, seating for 100 people, and a food van

While holidays abroad remain up in the air, one pub manager has decided to bring the seaside to his punters. Kyle Beck, from The King’s Arms in Wandsworth, South London, told The Mail on Sunday: ‘We will be turning our garden into a seaside getaway for everyone that has missed being able to go away over this lockdown.’

Meanwhile, its close neighbour, The County Arms, has installed a vast marquee to keep drinkers dry should the April showers hit.

Owner Diarmuid MacMorrow, 27, said: ‘We just wanted to be able to welcome back as many customers as possible regardless of the weather.

‘So even if it rains, we can have around 150 customers safely spaced out in groups of six under our marquee.’

There are around 45,000 pubs in England with 43 per cent having an outdoor area of some kind.

Young’s brewery will reopen 140 of their pubs with Wetherspoons also planning to serve at 394 of their establishments, with patrons not needing to book.

Some pubs are taking bookings, including the Water Lane Boathouse in Leeds that said it had taken 700 bookings in just five hours. Eddie Pticek, a manager at The Flintgate pub in Weybridge, Surrey, said they were already fully booked until June. He said he had invested in new seating areas and heaters, adding: ‘It’s going to be crazy. I am looking forward to it.’ 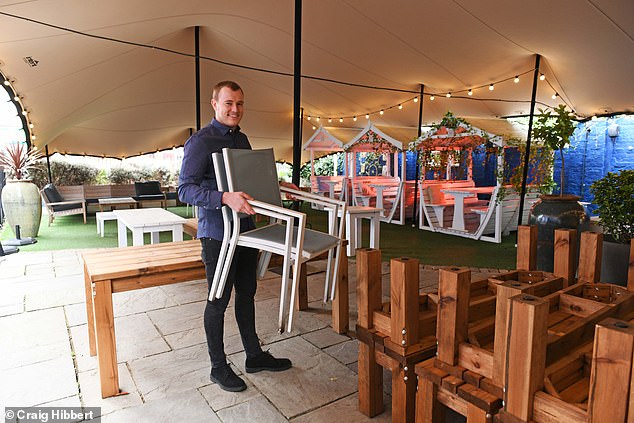 Industry experts predict about 40 per cent of pubs will reopen when drinking outside is permitted on April 12, with the remainder turning on their taps from May 17. Pictured: General manager Diarmuid MacMorrow and deputy manager Rebecca Jarhof prepare for reopening at the County Arms in Wandsworth, South-West London

Kate Nicholls, chief executive of UK Hospitality, said: ‘Our members that can open outdoor areas have reported strong interest from customers, which is not surprising after such a long period of closure.’

She added that a recent YouGov poll showed almost a third of people planned to visit a pub within a month of them opening.

In Scotland, pubs are expected to remain closed until at least April 26 although First Minister Nicola Sturgeon has hinted this could be brought forward due to the success of the vaccine rollout.

In Wales, First Minister Mark Drakeford has suggested pubs could open in line with England but no official announcement has been made while no dates have been announced for Northern Ireland.