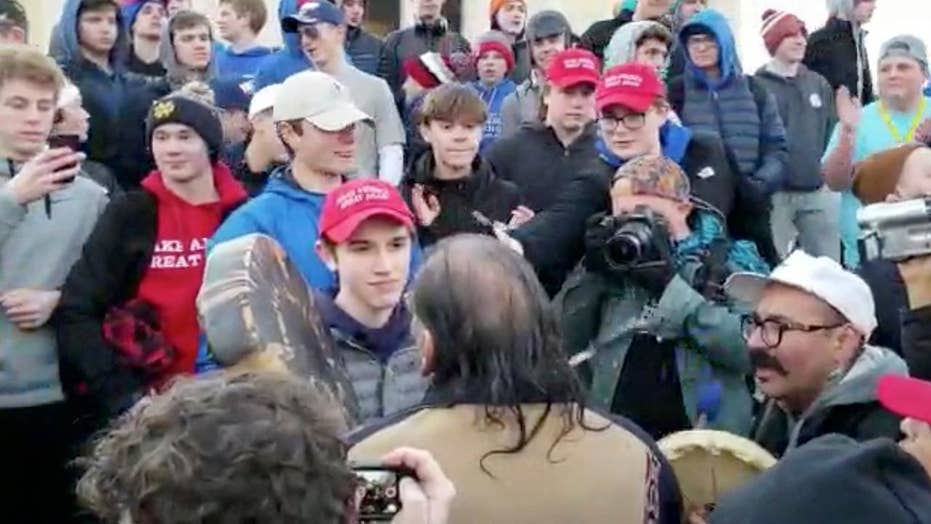 Attorneys representing the Kentucky high school student involved in a confrontation that went viral on social media last month announced Tuesday that they were suing The Washington Post for $250 million in compensatory and punitive damages.

The lawsuit, which was filed in federal court in Kentucky, accused The Post of practicing "a modern-day form of McCarthyism" by targeting Nicholas Sandmann and "using its vast financial resources to enter the bully pulpit by publishing a series of false and defamatory print and online articles … to smear a young boy who was in its view an acceptable casualty in their war against the president."

Washington Post spokesperson Kris Coratti told Fox News in an email that the paper was "reviewing a copy of the lawsuit, and we plan to mount a vigorous defense."

Sandmann, a junior at Covington Catholic High School, became a target for outrage after a video of him standing face-to-face with a Native American man, Nathan Phillips, while wearing a red "Make America Great Again" hat surfaced in January. Sandmann was one of a group of students from Covington attending the anti-abortion March for Life in Washington, D.C., while Phillips was attending the Indigenous Peoples' March on the same day.

Sandmann and the Covington students were initially accused of initiating the confrontation, but other videos and the students' own statements showed that they were verbally accosted by a group of black street preachers who were shouting insults both at them and a group of Native Americans. Sandmann and Phillips have both said they were trying to defuse the situation.

The lawsuit claims The Post "ignored the truth" about the incident and says the paper "falsely accused Nicholas of … 'accost[ing]' Phillips by 'suddenly swarm[ing]' him in a 'threaten[ing]' and 'physically intimidat[ing]' manner … 'block[ing]' Phillips path, refusing to allow Phillips 'to retreat,' 'taunting the dispersing indigenous crowd,' [and] chanting, 'Build that wall,' 'Trump2020,' or 'Go back to Africa,' and otherwise engaging in racist and improper conduct. …"Sandmann's attorneys accuse The Post of publishing seven "false and defamatory" articles about the incident between Jan. 19 and 21 and claim the paper "knew and intended that its false and defamatory accusations would be republished by others, including media outlets and others on social media."

Last week, investigators hired by the Roman Catholic Diocese of Covington concluded that the students did not instigate the confrontation with Phillips. Bishop Roger Foys, who initially condemned the students' behavior, wrote in a letter to parents that they had been "placed in a situation that was at once bizarre and even threatening."

Fox News' Lucia I. Suarez Sang and The Associated Press contributed to this report.