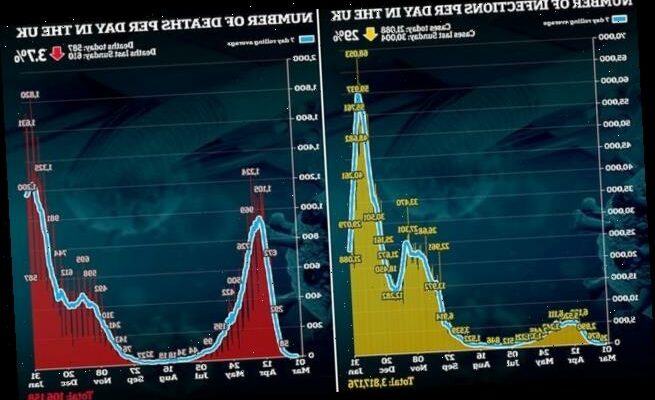 UK Covid cases fall 29% in a week to 21,088 and deaths fall by 3.7% with another 587 fatalities recorded as public health experts say impact of vaccine should be seen in ‘two weeks’

Coronavirus cases and deaths fell again today on last week as the latest official figures suggest that the national lockdown is helping to suppress the virus.

The same figures also show that daily Covid-related fatalities fell by 3.7 per cent from 610 deaths last week to 587 deaths today.

There are currently nearly 35,000 people in hospitals in the UK and 3,832 patients on ventilators, according to the latest official figures.

The second wave has seen bigger numbers of coronavirus patients in hospitals, with 21,684 patients during the peak of the first wave of the pandemic last April. 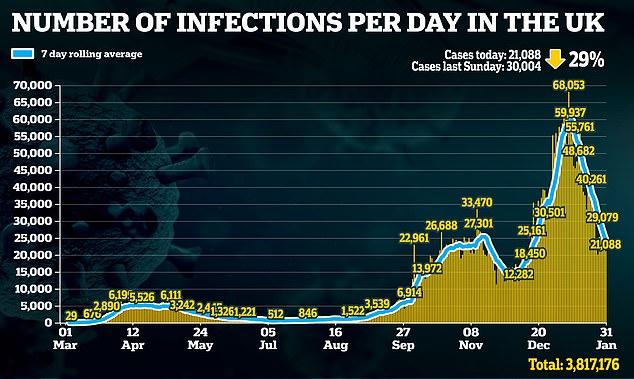 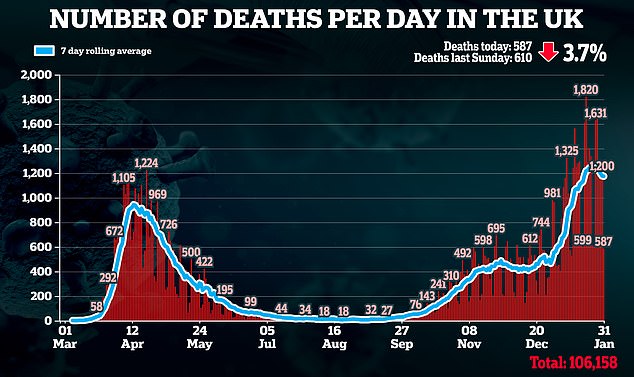 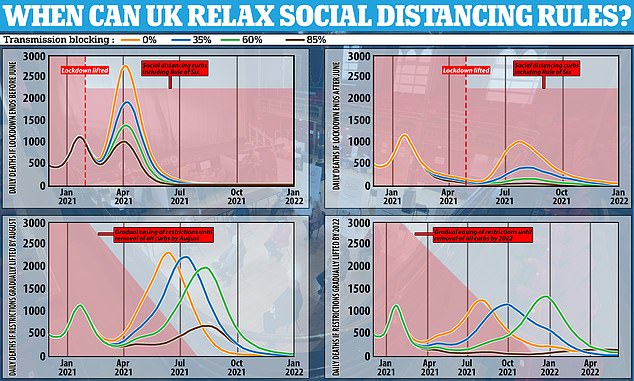 Grim new graphs lay bare the dilemma facing Boris Johnson as officials try to work out how to reopen the country without causing a third wave of coronavirus infections, as SAGE recommends keeping social distancing measures in place until 2022

It comes as Public Health England said the impact of Covid vaccinations in the over-80s should be seen ‘over the next two weeks’.

Dr Susan Hopkins, the Covid-19 strategic response director at the body, said rates a declining ‘in all age groups’ currently but it’s ‘a bit early to say’ if the trend is due to the vaccine or more stringent lockdown measures.

Another 549,943 coronavirus vaccines have been given out in England as the total number of vaccinations in the UK reaches 8,251,146.

This marks the highest number of jabs given to Britons so far as the government looks to bring the cycle of coronavirus lockdowns to an end by proceeding with its breakneck rollout of the vaccines.

Speaking to BBC One’s Andrew Marr Show, Dr Hopkins said: ‘What we would like to see is a divergence in the case rate in the over-70s and over-80s who have been vaccinated from the younger age groups, to show that they are declining faster.

‘We have now hit 80 per cent of the over-80s being vaccinated and really fast numbers climbing in the under 80-year-old age group as well.

‘We expect over the next two weeks to start seeing that impact of that vaccine in that age group, and also an impact on hospitalisation.’

Also today, intensive care doctors said the coronavirus crisis in hospitals has ‘stabilised’ and staff are no longer have to plan for extra capacity – but warned that 2021 is going to be ‘another very hard year’ for the nation.

The announcement follows reports that SAGE has advised the government to keep social distancing measures in place until the end of the year amid fears that reopening the country too quickly will prompt a third wave of infections.

New modelling passed on to No10 suggests that restrictions including the Rule of Six may have to remain in place until 2022, while coronavirus vaccines would need to be 85 per cent effective to prevent a surge in deaths if curbs were totally eased.

A downbeat paper commissioned by SAGE subgroup SPI-M and produced by the University of Warwick showed that the UK could experience a large spike in deaths if inoculation fails to significantly cut transmission of Covid-19 while draconian shutdown measures are relaxed.

It warns that a ‘high uptake’ of vaccinations is also vital to getting the country back to normal without risking a dreaded third wave of the disease, which has now claimed more than 100,000 lives according to official figures.

The paper also claims that even with Britain’s breakneck jab roll-out well underway, the decline in deaths would be crushingly slow – and that even in a best-case scenario lockdown would have to be kept in place until June to prevent another significant spike in deaths.

‘Only vaccines that offer high infection-blocking efficacy with high uptake in the general population allow relaxation of non-pharmaceutical interventions without a huge surge in deaths,’ the paper recommends.

Lead researcher Dr Sam Moore said that even if vaccines do have a significant impact on reducing infections, the impact will not be seen ‘for some time to come’. He added: ‘So I think they have to relax slowly and we’re going to have to be patient. ‘And we need a very high uptake in order to have this effect.’

The modelling, which helps to explain why Boris Johnson is so reticent to end the third national coronavirus lockdown, comes amid renewed pressure from Tory backbenchers for a ‘roadmap’ out of lockdown.

So far the government’s route out of the cycle of shutdowns initiated last March would see schools closed until at least March 8, with hospitality businesses including pubs and restaurants to reopen as far away as April.

But with Rishi Sunak mulling increases to capital gains tax to pay for the massive £400billion blackhole in public spending accrued during the pandemic and warnings that the economy could take a decade to recover, Tory MPs are likely to be rattled by the new graphs.