When Rosalie Foreman's aged care facility was about to go into COVID-19 lockdown, her husband, Rodney, "bit the bullet" and moved her back home.

It was not quite an escape from Alcatraz, but the decision in late March was unusual. And it was difficult and costly to coordinate the care, equipment and other services needed for her at home in Mannum, South Australia, Mr Foreman, 73, told the aged care royal commission. 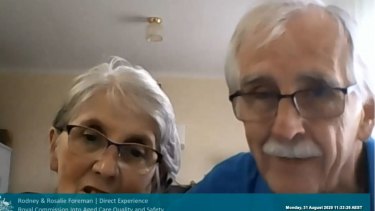 Rod and Rosalie Foreman giving evidence via video. Rosalie was told she would never walk again, but the couple organised extra physio sessions. And they moved her back home out of aged care before the lockdown. She is now walking with the aid of a walker. Credit:provided

Seven out of the one million people receiving Commonwealth-subsidised care at home have died from COVID-19. That is compared with 412 deaths among the 200,000 people living in residential care.

"So we knew the aged care facility would go into almost total lockdown, or just with very restricted access, it was just easier to say, we'll bite the bullet and get her out," he said via video.

"It is something that doesn't happen. We got Rosalie out of aged care, I am not convinced there are not more situations like ours."

Counsel assisting the commission Peter Gray QC said in his opening address the pandemic was likely to "reinforce older Australians general preference to stay at home". 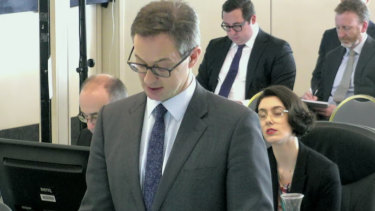 Yet Australia had one of the OECD's highest rates of older people living in residential aged care, although most wanted to stay at home.

Nearly 19 per cent of Australians aged 80 years or older lived in residential care, compared to 12 per cent in Canada and 14 per cent in New Zealand.

"These figures suggest our system is distorted towards institutional care, and away from home care," Mr Gray said.

Seven per million: Aged care at home,  seven out of a million recipients

He called for a "far more urgent effort" to prioritise home care over residential care. This was not to disparage residential care, but “it is not generally the setting a person would choose.”

At the same time, recipients weren't spending the money they had received, suggested the system of home care needed streamlining and overhauling.

More than a billion dollars in funds hadn't been spent, yet some people with very high needs couldn't afford the equipment they needed to stay at home.

Mr Gray said each hour of additional home care per week was associated with an appreciable six per cent lowering of the chance that the person will ever have to enter residential care.

"Home care should act as a stitch in time, preventing or at least delaying much more weighty problems and more costly forms of care," he said.

It also cost less. Residential aged care for 200,000 older Australians cost the Commonwealth about $13 billion in 2018/19 compared to $5.1 billion for the two home care programs serving a million people.

Yet nearly 18 months after the Royal Commission’s home care hearing in March 2019, and 10 months after the Interim Report, Mr Gray said people who need more complex or intense care at home were still waiting more than 12 months for their assessed needs to be met.

"That is, they are waiting for 12 months after the assessment until they get the help they need."

When Mrs Foreman began living at the nursing home after a stroke, the couple saw the file notes: she would never walk again.

They "weren't keen on that assessment", and worked with a physiotherapist to get her walking again.

But it was hard to get help in an aged care facility. And if she spent too much time at home with her husband, she was deemed to have left the facility.

To get around that, she often had "sleepovers" at their nearby home. And the couple arranged for extra physiotherapy sessions while she was there.

Organising equipment and care for her at home was also difficult, the commission heard.

Now mobile with the aid of a walker, Mrs Foreman was asked how she felt after being back home for more than four months. "Very happy," she replied.