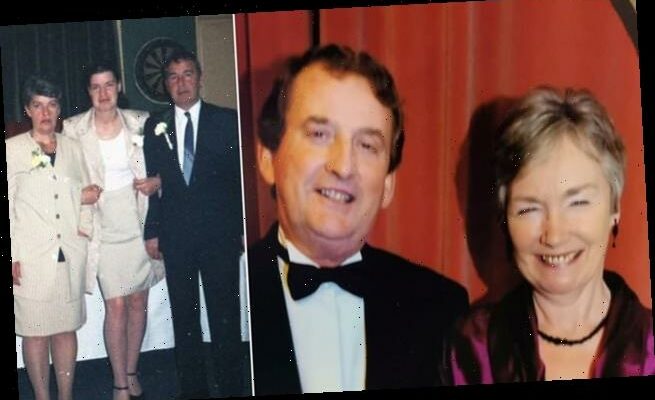 A couple married for 51 years have died five days apart – after displaying symptoms of Covid-19 two days before they were due to receive their first dose of the vaccine.

Fred Harding, 72, and his wife Sandra, 70, from Bethnal Green, East London, were both scheduled to receive their first jab on Saturday, January 30.

The couple had been shielding since last March due to Mrs Harding’s Chronic Pulmonary Obstructive Disease – an inflammatory lung disease that causes obstructed airflow.

But just two days before their appointment to be vaccinated, Mr Harding fell ill, with his wife then displaying symptoms of the virus the following day.

Mrs Harding suffered a heart attack and died on Thursday, February 4 and post-mortem tests confirmed she had coronavirus.

Her husband, who had tested positive for Covid-19 after he was rushed to the Royal London Hospital, passed away on Tuesday, February 9. 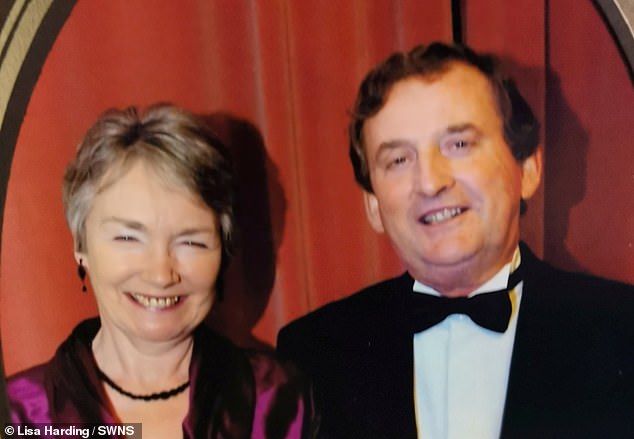 Fred Harding, 72, and his wife Sandra, 70, from Bethnal Green, East London, were both scheduled to receive their first jab on Saturday, January 30. Pictured: The couple

Their heartbroken daughter Lisa Harding, the eldest of their four children, said she was struggling to come to terms with the devastating double blow.

Ms Harding, 49, said: ‘It is like being hit by a truck. To have lost them both in six days is devastating.

‘Dad was rushed to hospital and his condition deteriorated so much there was a Zoom call to say goodbye. He was sedated and on a ventilator.

‘Mum had been in bed with her symptoms and she got out of bed at 9pm on Thursday, February 4 to take her tablets and had a massive heart attack.

‘Then on Tuesday, we got a phone call to say my dad had passed away.

‘I can’t get my head around it, it doesn’t make sense to me.

‘Nothing prepares you for losing a parent, but to lose two in such a short space of time is just incredibly cruel. My heart is beyond broken.

‘The day after my father died, the latest daily figures were 1,001 deaths – that stuck out for me because that one was my dad.’ 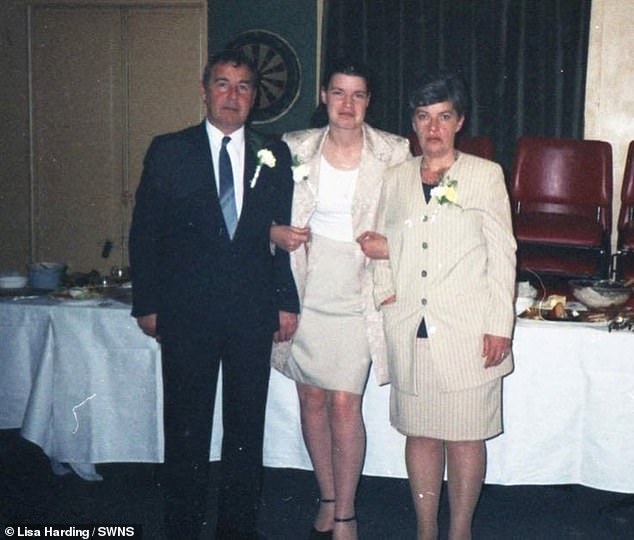 Their heartbroken daughter Lisa Harding, the eldest of their four children, said she was struggling to come to terms with the devastating double blow. Pictured: Ms Harding with her parents in 1988 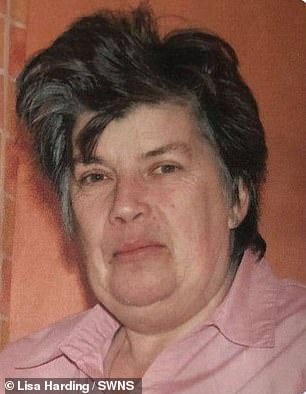 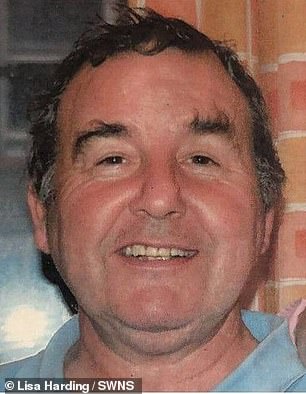 Ms Harding said her parents, who were grandparents-of-four, had been ‘inseparable’ in their 51-year relationship.

Mr Harding, a former porter and bus conductor, was as ‘strong as an ox’ with no underlying health concerns, she said.

But the pair had been shielding since last March due to Sandra’s Chronic Pulmonary Obstructive Disease (COPD).

Ms Harding, a marketing executive, said she had ‘no idea’ how they contracted Covid-19 as they followed all the guidelines.

She also fears she may not be able to attend their funeral as she lives more than 100 miles away in Coningsby, Lincolnshire.

She said: ‘There is no way of knowing how it came into their house, they had both been shielding since March and doing all the right things. They didn’t go out.

‘Covid is a sniper once it is on surfaces. It could have come in through an online shopping delivery, I just don’t know.

‘They had been together for 51 years and they were inseparable.

‘When my dad was asleep on the ventilator, we had the agonising conversation of how we were going to tell him my mum had died.

‘But he never woke up and we never had to tell him.’ 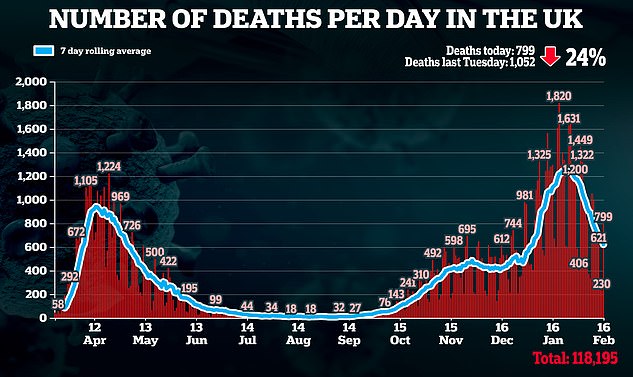 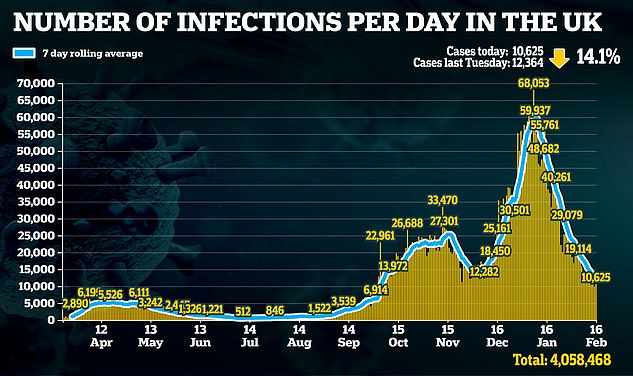 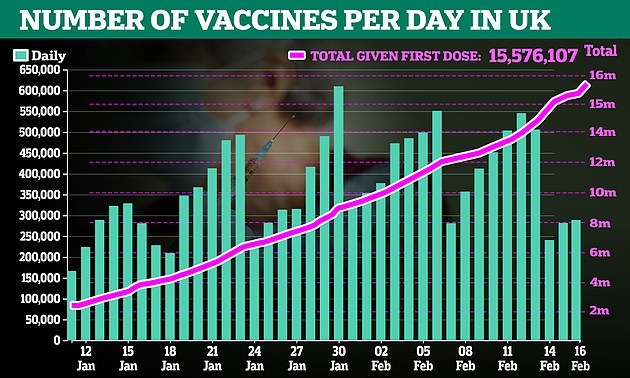 Ms Harding said the couple were very popular and she had received messages of condolence from ex-colleagues of Mr Harding’s and pupils from the school where her mother was a teaching assistant.

She has urged people to ‘grab the vaccine with both hands’ when they are offered it.

She added: ‘I’m so proud of the vaccine rollout and how well it is going, but it is bittersweet because, for my mum and dad, it came just too late.

‘The Thursday before they were due to have their vaccine, dad became ill and was displaying symptoms. Then mum was ill the next day.

‘Because they were displaying symptoms, they couldn’t have their vaccine.

‘People have legitimate concerns, I get that, but if you’re worried, talk to a health professional or your GP and they can put those fears to one side.

‘It’s easy to be desensitised from the numbers on the TV every day, but behind those numbers is a story just like mine.

‘You can’t see Covid, it’s like fighting an invisible enemy. If you’re offered the vaccine, take it. Grab it with both hands, it doesn’t just protect you, it protects your relatives and vulnerable people around you.

‘You don’t want to be one of the numbers you see on the tv every night.