A couple who left their pedigree pooch with groomers at a pet store were left outraged after returning to find their dog had been stripped of all its fur.

Lesley and Steve Wilks had arranged for their one-year-old Maltese terrier, Effy, to have parts of her fur shaved after she had become matted following play fights with their other pooch, CJ.

Mr Wilks took Effy to The Groom Room at Pets at Home in Hull, East Yorkshire, on Wednesday morning and showed staff the matted hair on her two front legs and behind her shoulder. 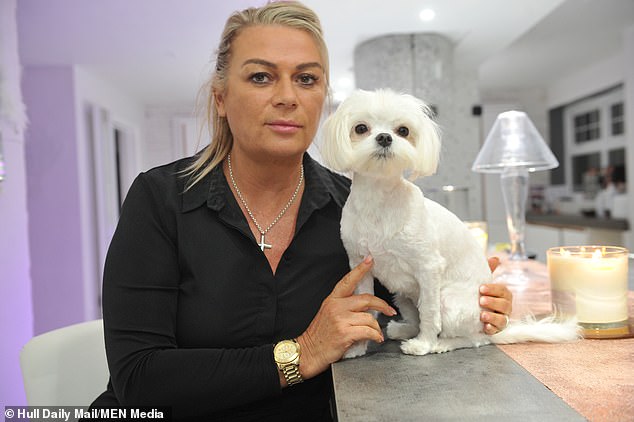 Lesley (pictured) and Steve Wilks had arranged for their one-year-old Maltese terrier, Effy (pictured), to have parts of her fur shaved at Pets at Home in Hull. But were shocked to find the pooch had received a much more drastic cut than they were anticipating 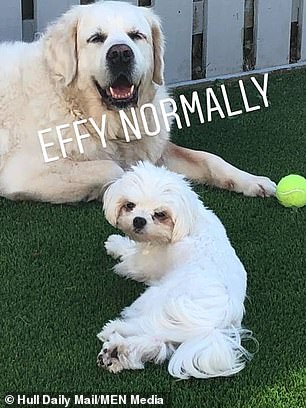 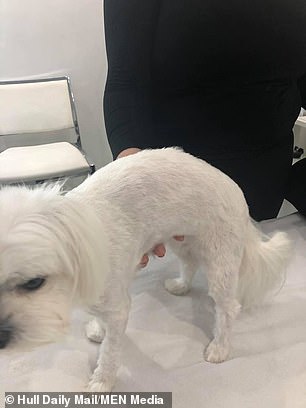 The couple claim the experience has left their dog ‘traumatised’. Effy is pictured before the shave (left) and after (right), and now the couple say they will have to take the pooch to the vet ‘because she is constantly shaking’

He claims he told staff he did not want to the dog to be fully shaved, but less than 90 minutes later he was horrified to return to the store and find Effy virtually ‘pink’ after having her body sheared by groomers.

Mr Wilks, 54, said: ‘I told them I did not want her shaving all over. They said she was matted everywhere but she wasn’t as she’d only been bathed and brushed on Monday.

‘When I saw the state of her I wanted to shout and start swearing but I didn’t – I kept my cool and I said nothing because I just wanted to get out of the store.’

But Pets At Home said Effy was shaved for her own welfare due to the extent of the matted fur.

After returning home, Mrs Wilks ‘burst into tears’ when she saw her beloved pet before angrily taking to social media to rant about the procedure which she likened to ‘torture’ for Effy.

Mrs Wilks, a 50-year-old beautician, said: ‘We are absolutely distraught, disgusted and gutted [by] what The Groom Room Pets At Home Hull has done to my baby girl. 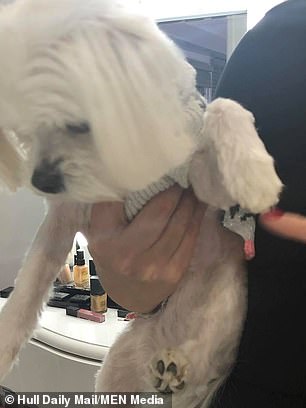 ‘Her poor bottom has been completely stripped as has all her fur! Please be aware this place is nothing but a shave room.

‘I hope [you’re] happy and would love to get responses and advice from anyone, as I would love to sue them for what they have done.

‘She has been shaking with anxiety since she returned this afternoon. Their attitude in response has been disgusting.’

Mr Wilks said he was even more aggrieved after Pets at Home charged him an extra £10 to have Effy’s body shaved.

The dad-of-two said: ‘Originally it was £40 but they put an extra £10 on for the satisfaction of shaving her all over which I didn’t want done.

‘They offered me the deposit back but they said it in such a nonchalant way I thought they were being clever.’

The couple, who have used The Groom Room twice before, went to the pet store because their normal dog groomer was on holiday.

However, he said the pair will now boycott the shop after Effy’s shaving which has had serious repercussions on the young pup, according to Mr Wilks. 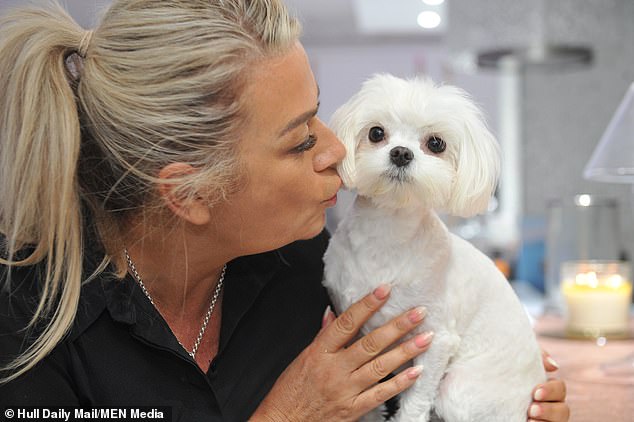 Pets At Home say Effy was shaved for her own welfare due to the extent of the matted fur. But Mrs Wilks (pictured) said their ‘attitude in response has been disgusting’

Mr Wilks said: ‘We wanted to get her done for Christmas like anyone would but now we are going to have to take her to the vet because she is constantly shaking and is even defecating inside.

‘They have traumatised her and it’s freezing now so she is constantly shivering. She is pink and it looks like she has just come out of an operation.

‘They said they would have to shave under her legs which was not a problem. I understood that but the last thing I said to them was ‘don’t shave all over.’

A spokesman for Pets at Home said: ‘Our groomers are highly trained and will always put the welfare of pets first.

‘When Effy was brought in to our Hull store to be groomed it was explained that, because her coat was heavily matted, particularly around her legs and shoulders, it would have to be clipped close to the skin, purely for the welfare of the dog.

‘We believe that clipping a matted coat is kinder, faster and gentler for the pet. Effy’s owner, Mr Wilks, was advised of this, including the additional £10 matting charge.

‘Our groomers offered to refund the deposit and not groom Effy, but the customer agreed to go ahead and signed both our clipping policy, and pet grooming salon contract.

‘We hope that Effy will be happier and healthier with her matted coat now removed and our expert groomers would be happy to help if Mr Wilks has any further concerns.’