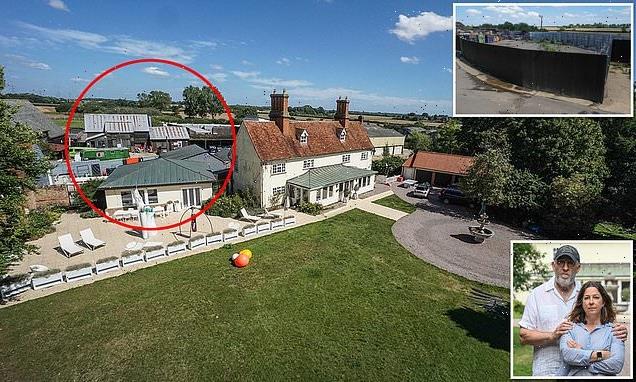 Couple embroiled in a bitter two-year battle over planning breaches by scaffolding firm next to their £1.5m Hertfordshire home launch bid to overhaul ‘retrospective’ planning process

A couple embroiled in a bitter two-year battle over planning breaches by their ‘noisy neighbour’ have launched a bid to get the Government to review the retrospective planning process.

Mike Tattum and his partner Jane Bell have endured a nightmare battle with their local council over numerous planning breaches by their ‘noisy neighbour’ Connect Scaffolding.

The ongoing dispute, first highlighted by MailOnline last year, saw their luxury home worth £1.5million at Hadham Park House in the Hertfordshire countryside blighted by 20ft tall black fencing, portacabins, floodlights and a stream of noisy, giant lorries driving up and down the quiet lane where they live.

Successful City analyst Mr Tattum told how bitter planning confrontations and disputes with the scaffolding firm went all the way to the High Court, but still the council refused to step in. 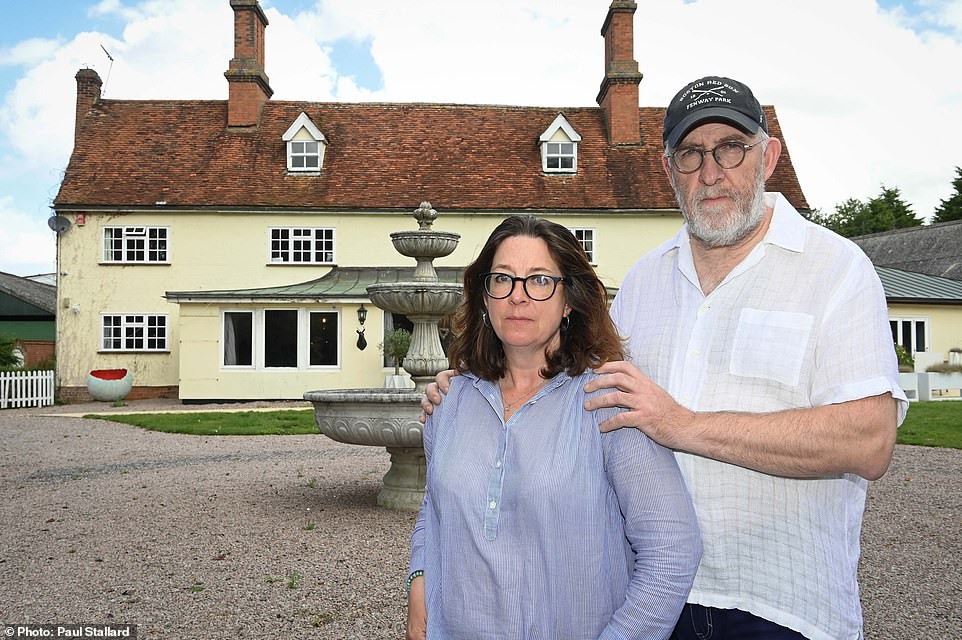 Mike Tattum and Jane Bell are at war with the scaffolding site next door who have built 11 portacabins and a 20ft high wall made from black corrugated iron as well a daily driving trucks up and down the country lane, spoiling their peace and quiet

Only now are they seeing some action with a number of portacabins being removed from the site and some areas of land being reverted to Green Belt.

The row led to East Herts District Council having been ordered to pay £83,000 in legal costs to settle a Judicial Review into unlawful permission its planners gave retrospectively to enable the scaffolders to expand at Hadham Park, Bishop’s Stortford. The Council said it chose to settle early due to the costs associated with a full hearing.

A council spokesman said: ‘The council did not lose the judicial review instigated by the claimants, it settled early before a Judge ruled on whether there was any merit in the claim to allow it to proceed to a full hearing.

‘Due to the impact on the public purse, the council, by way of a detailed costs assessment, challenged the manifestly excessive legal costs the claimants were seeking to recover considering the case never made it to court. Unfortunately, after the assessment the claimants were awarded their costs which the council found extremely disappointing. 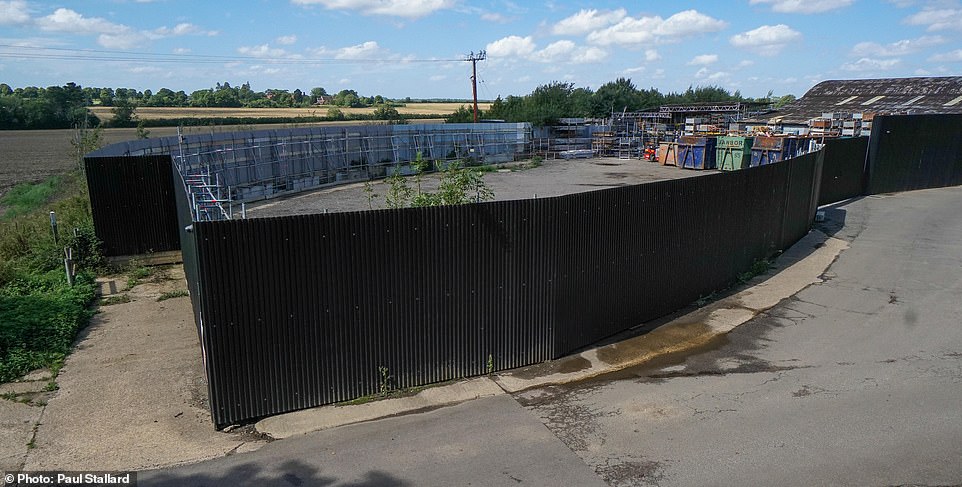 The couple say that all was fine when they first bought the property in 2014, but that over the past two years the wall (pictured) has been erected as well as a large office and 11 portacabins, all without council planning permission 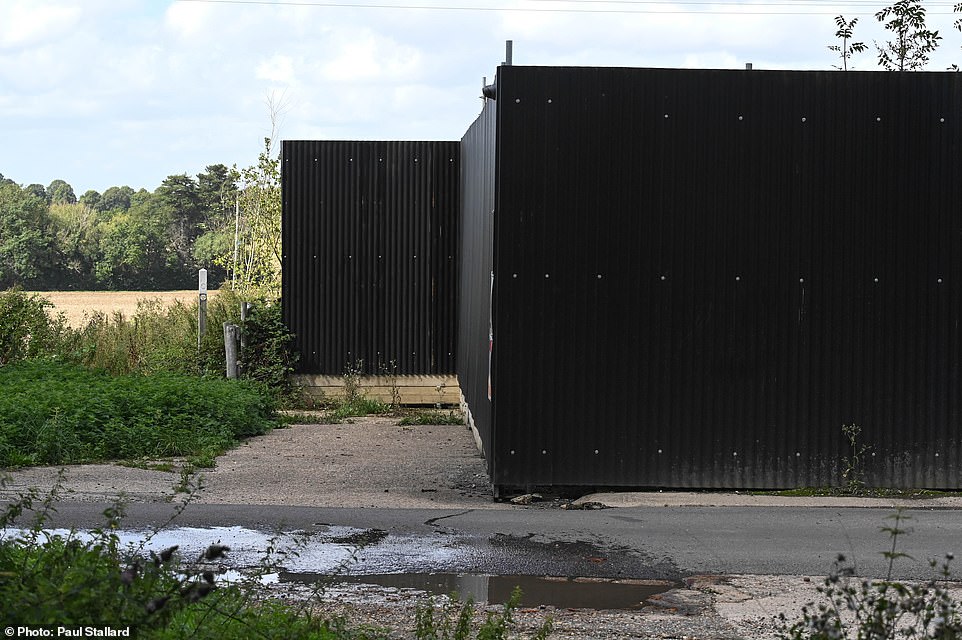 City analyst Mike, 55, accused Connect Scaffolding owners of the land next door of ‘created an industrial park by stealth’. He says his views across the Hertforshire countryside have been spoiled by the erection of corrugated iron walls (pictured)

‘As case law states, it is important that public authorities are able to make and stand by honest reasonable and apparently sound administrative decisions made in the public interest without fear of exposure to undue financial prejudice if the decision is successfully challenged.’

However, Mr Tattum says the council’s assertion that it has been trying to keep costs down is ‘laughable’.

He said: ‘The very idea that East Herts acted early to keep costs down is laughable. They were contacted right at the start of the process and could have admitted guilt early on – at no cost to the public purse, but instead chose to defend the indefensible.

‘What a terrible allocation of taxpayers’ money. Maybe if they spent the money as if it were their own, rather than given to them by the taxpayer, we would not see such awful waste. 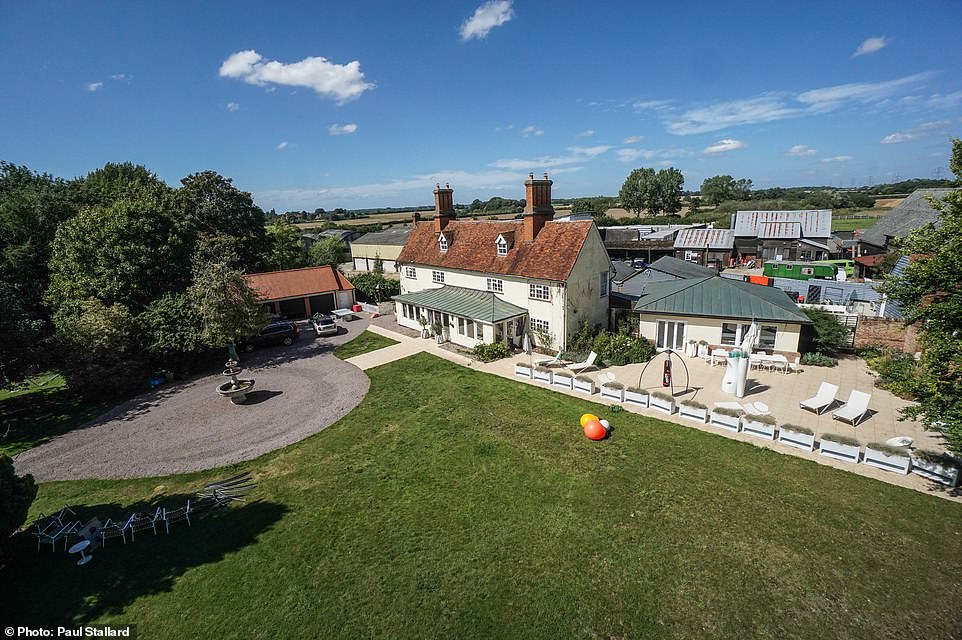 The couple’s beautiful property (pictured) came with an indoor swimming pool, five bedrooms and is set on 14 acres of land 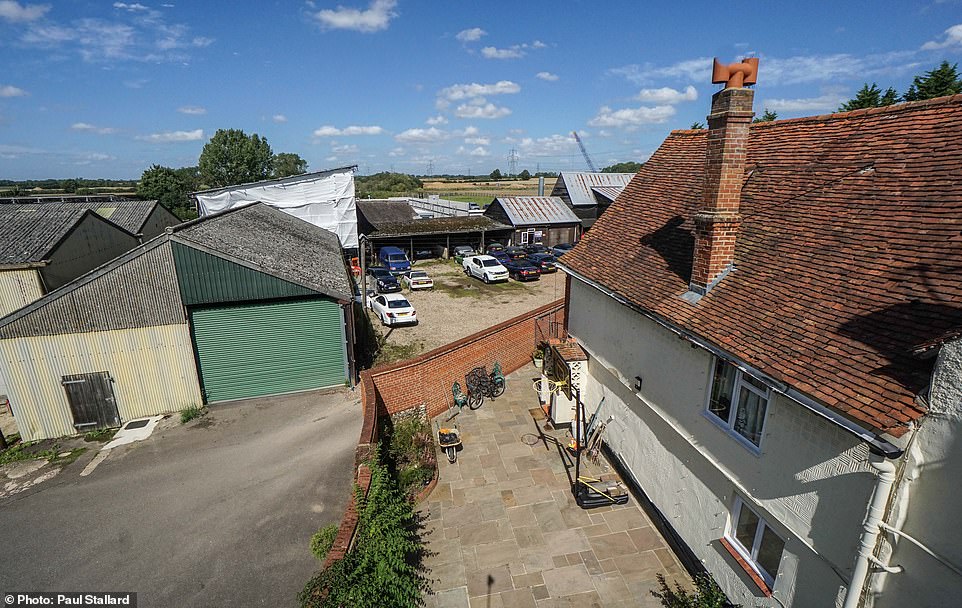 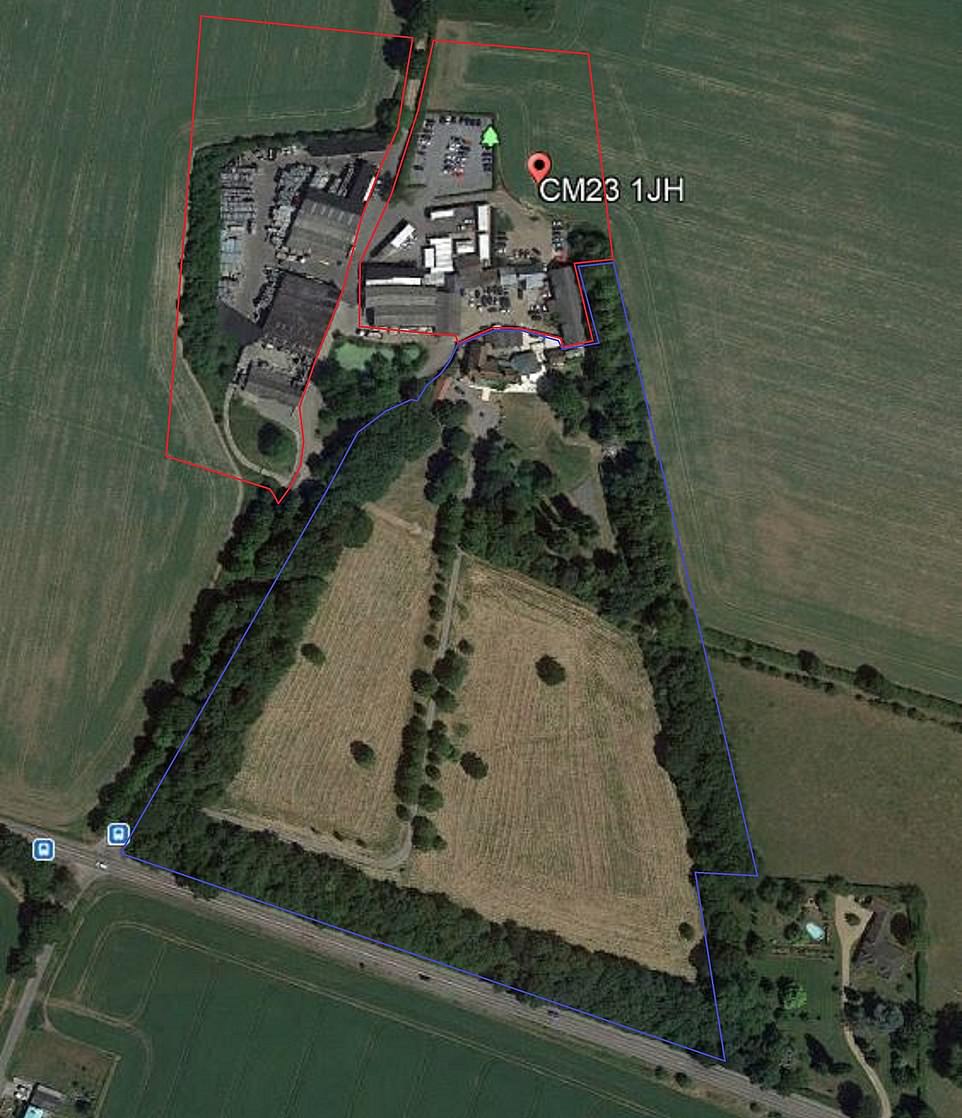 An aerial shot of the neighbourbouring properties shows how the house Mike and Jane purchased in 2014 backs onto the area owned by Connect Scaffolding, a firm which has more than doubled in size to 200 employees in the last five years 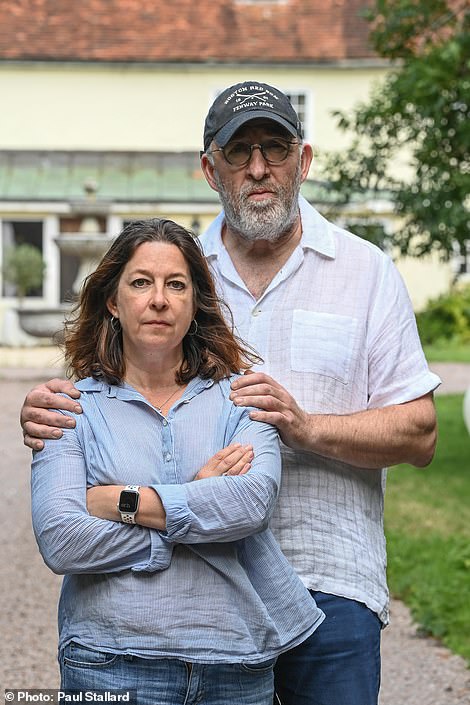 The couple (above) have four sons

‘If we had not stood up for what is right, the Council would have granted permission to a habitual planning offender, breaking the law to do so. How many other decisions made by this planning team have also been unlawful? I believe there should be an enquiry with the full benefit of public scrutiny about the decision making at East Herts Local Planning Authority.

‘This is yet another example of the council being unwilling to admit when they have got it wrong.’

Mr Tattum says the costs he was awarded cover about 70 per cent of his own legal fees and that the true cost to East Herts Council is likely to be in the region of £150,000 to £200,000, when taking into account the council’s own legal and professional fees.

Ms Bell says: ‘The only winner in this whole sorry affair at Hadham Park is Oliver Cave, the owner of Connect Scaffolding, who has now benefitted for over two years from the use of developments that do not fit into the Local Plan for building and have never been granted any form of permission. How many times should members of the community be let down before East Herts choose to take any meaningful action to the full extent of their powers?’

Mr Tattum and Ms Bell have now launched the ‘Action on Planning’ campaign to urge the Government to review the retrospective planning process and to introduce new legislation to compel local authorities to take swift action against those who transgress the planning rules. 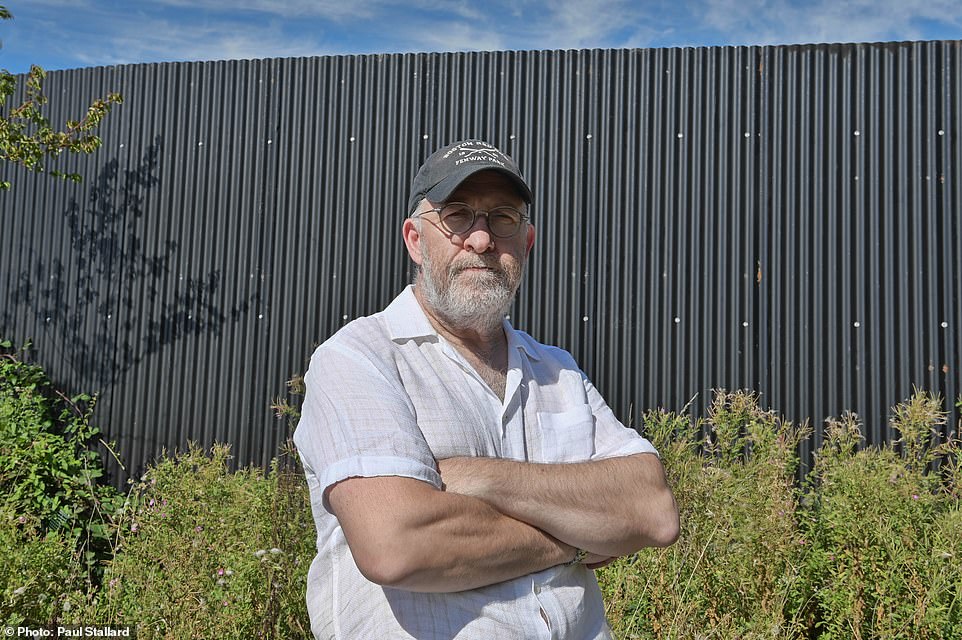 Mike told MailOnline: ‘There has been little attempt to act within the planning framework that most of us use – where planning permission is sought before development begins.’ 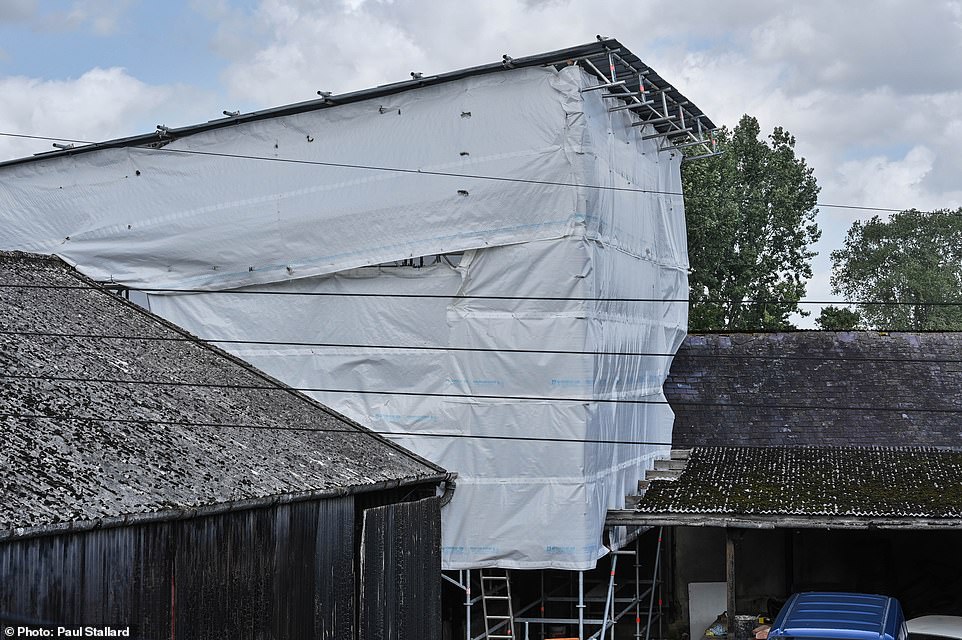 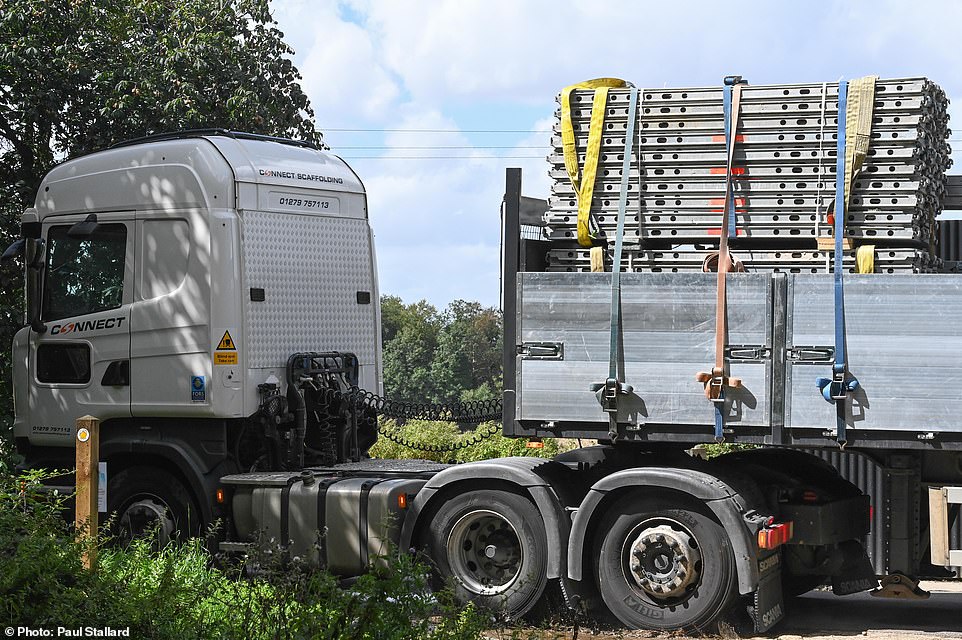 Mr Tattum says it will never make up for the stress and anxiety the dispute has caused his family, but he hopes that it will stop wasting taxpayers’ money and help to protect the Green Belt.

‘These are incredibly difficult times for us all. Our liberties are restricted, our world much smaller and our experiences much narrower than before. We need to see that our public officials are looking after the interests of our community, not wasting our hard-earned money on frivolous legal action. Senior management at East Herts Planning Department need to learn to say sorry when they are wrong and focus on doing their jobs and applying the full weight of planning law against planning chancers.’