The Bronze Lady: Council defends spending £100,000 on unveiling ceremony for Margaret Thatcher statue because it will attract tourists to her home town

A council defended itself today after setting aside £100,000 to cover an event unveiling a statue of former prime minister Margaret Thatcher in her hometown.

The £300,000 10ft plinth of the Iron Lady will be situated on St Peter’s Hill Green in Grantham, Lincolnshire, after being funded by the Public Memorials Appeal charity.

South Kesteven District Council has put £100,000 towards the unveiling event, in a bid to promote ‘inspirational women’ of the area, including the first woman police officer Edith Smith and the Duke of Wellington’s advisor Harriet Arbuthnot.

But revelations over the cost have caused a backlash online, with some branding it a ‘waste of taxpayers’ money’ and saying the cash should go to the local hospital.

However, the council have now responded and said they expect public and business fundraising will meet the full costs, but they had to allocate funds for the event.

It comes after a number of statues in Britain were targeted over the summer in Black Lives Matters protests, which saw a statue of Edward Colston toppled from a plinth and thrown into a harbour in Bristol because of his role in the city’s slave trade. 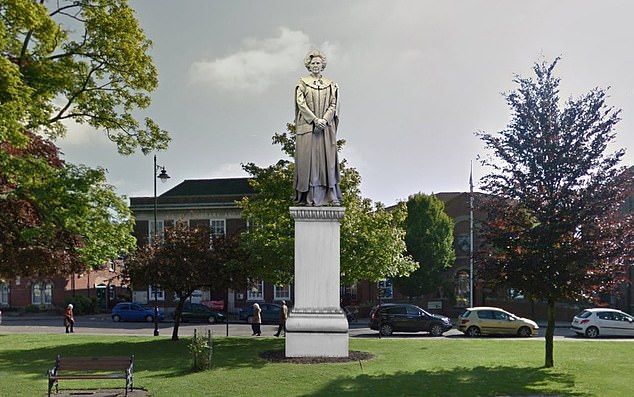 An artist’s impression of the £300,000 10ft plinth of Margaret Thatcher which will be situated on St Peter’s Hill Green in Grantham, Lincolnshire 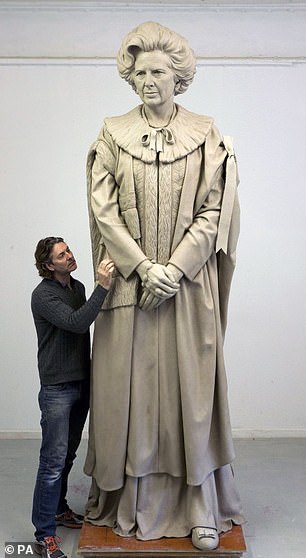 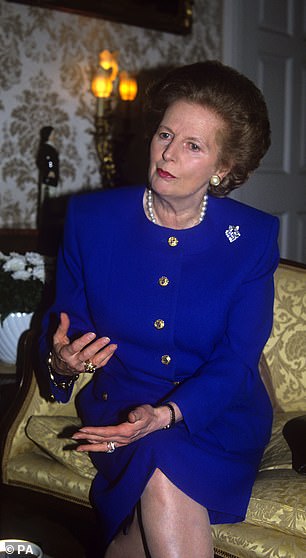 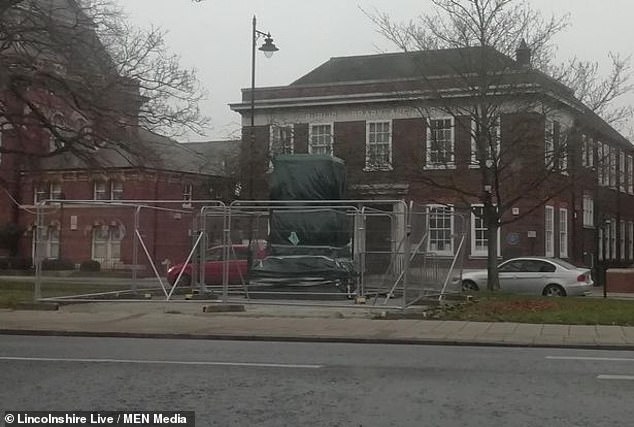 Among those unimpressed by the statue of Baroness Thatcher was Julie Pilkington, who said: ‘I don’t think it will encourage people to visit Grantham, quite opposite.’

Plans to erect a statue to Grantham’s most famous daughter have split the town for more than a decade.

Despite several suggestions by successive mayors, the only tribute to the former prime minister in her Lincolnshire hometown remains a tiny plaque above her father’s former grocer’s store in North Parade.

The deadlock was finally broken in February 2019 when a report to South Kesteven District Council stated there was not felt to be a significant threat to the installation of the statue locally.

But it added there was still a possibility any public statue of Baroness Thatcher would be a likely target for politically motivated vandals.

Councillors on the planning committee voted unanimously in favour of the proposal despite the local protests.

In a bid to avoid it being attacked, Lincolnshire Police recommended it should be placed on a ‘sufficiently high plinth and in easy view.’

Grantham Community Heritage Association, which runs the Grantham Museum, had received 17 letters of objection to their planning application, mainly noting Mrs Thatcher’s position as a ‘divisive figure’ and the potential for crime and disorder.

The statue has been paid for by The Public Memorials Trust, a charity that aims to commission and erect memorials to historically important people. Supporters hope the statue will increase the town’s tourism offer and visitor numbers.

David Mortimer added: ‘Waste of money. Money should be spent on the homeless, homelessness has increased from the Thatcher years. We all pay council tax and it’s going up each year. Why a statute to remind us of her?’

And Laurie Turner added: ‘Give the money to Grantham hospital.’

A council spokesman said: ‘The cost of the statue was funded by The Public Memorials Appeal and further money to support the project was raised by the Grantham Community Heritage Association.

‘In the long-term, the statue is expected to attract more tourists to the area, providing a boost to the local economy.

‘Our expectation is that the full event costs will be met through public and business fund-raising and donations, although there is a need to allocate funding to underwrite the event.’

The statue was approved by councillors in Grantham in February 2019, despite concerns she would be targeted by ‘politically-motivated’ vandals.

Since then the erection of the memorial has been further delayed by the coronavirus pandemic which has led to fresh calls for the whole idea to be scrapped.

The work by sculptor Douglas Jennings remains in storage at a secret location and a date for the big unveiling has yet to be confirmed.

All that can be seen in the town is a lonely plinth wrapped in tarpaulin and fenced off waiting for the statue, which was previously rejected by Westminster Council.

Lincolnshire Police had previously recommended the statue is placed on a ‘sufficiently high plinth’ and within easy view to deter attackers.

A cement base was laid in September 2019 and an announcement followed that the statue would be unveiled in the ‘early part’ of 2020 with details expected in January.

A plinth for the statue was finally craned into place in February and ground work was expected to continue through March, but no date has been given for the unveiling.

The bronze sculpture is set to stand on the green at St Peter’s Hill, in between statues of Sir Isaac Newton and Frederick Tollemache.

Margaret Thatcher (nee Roberts) was born and raised in Grantham and attended Kesteven and Grantham Girls’ School, before gaining a scholarship to study at Oxford University. Her father Alfred, a grocer, was Mayor from 1945 to 1946. 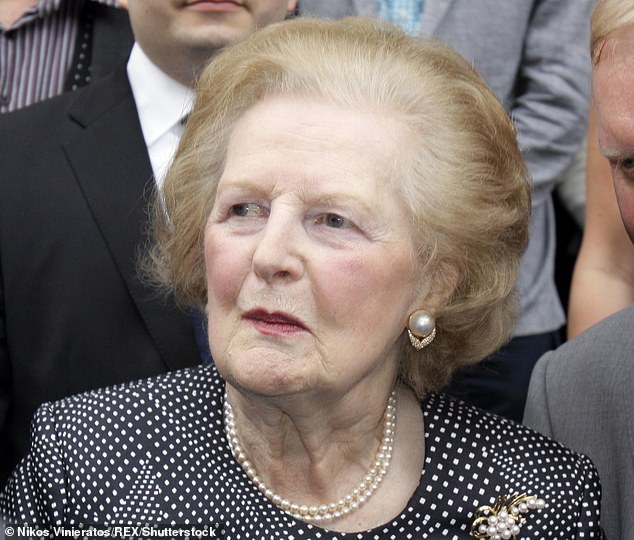 Baroness Thatcher, pictured in London in July 2010, was born in Grantham in October 1925 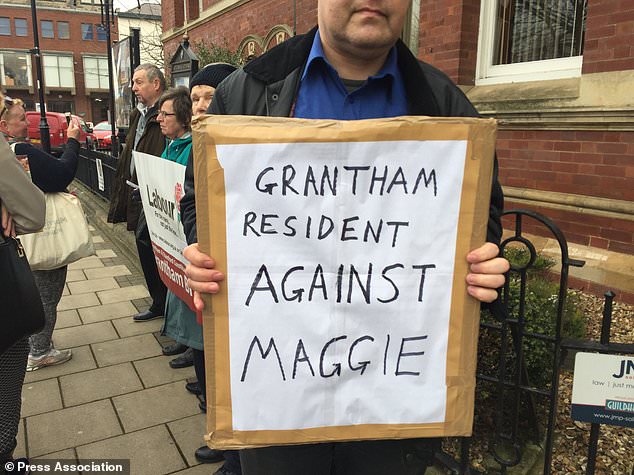 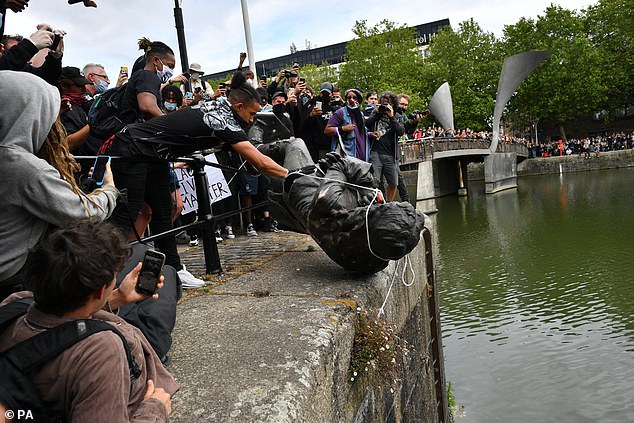 Plans to build the statue on Parliament Square in London were previously rejected by Westminster Council due to fears over vandalism. It was then offered to Grantham.

A Westminster Council planning document suggested the proposed statue had come too soon after Baroness Thatcher’s death in 2013.

The council has a ‘ten year principle’, where statues or memorials are generally not erected until ten years have elapsed since the subject’s death.

The Metropolitan Police also raised concerns over possible civil disobedience but this did not form part of the planning application.

However, Grantham Community Heritage Association, which runs the town’s museum, said it was a ‘fitting tribute to a unique political figure’.