COVID cases in England have more than doubled in a week with 17,200 people a day being infected with the virus, data from the Office for National Statistics (ONS) has revealed.

This is up from the previous week where 8,400 cases were recorded and the ONS stated that infections in teenagers and younger adults are also rising. 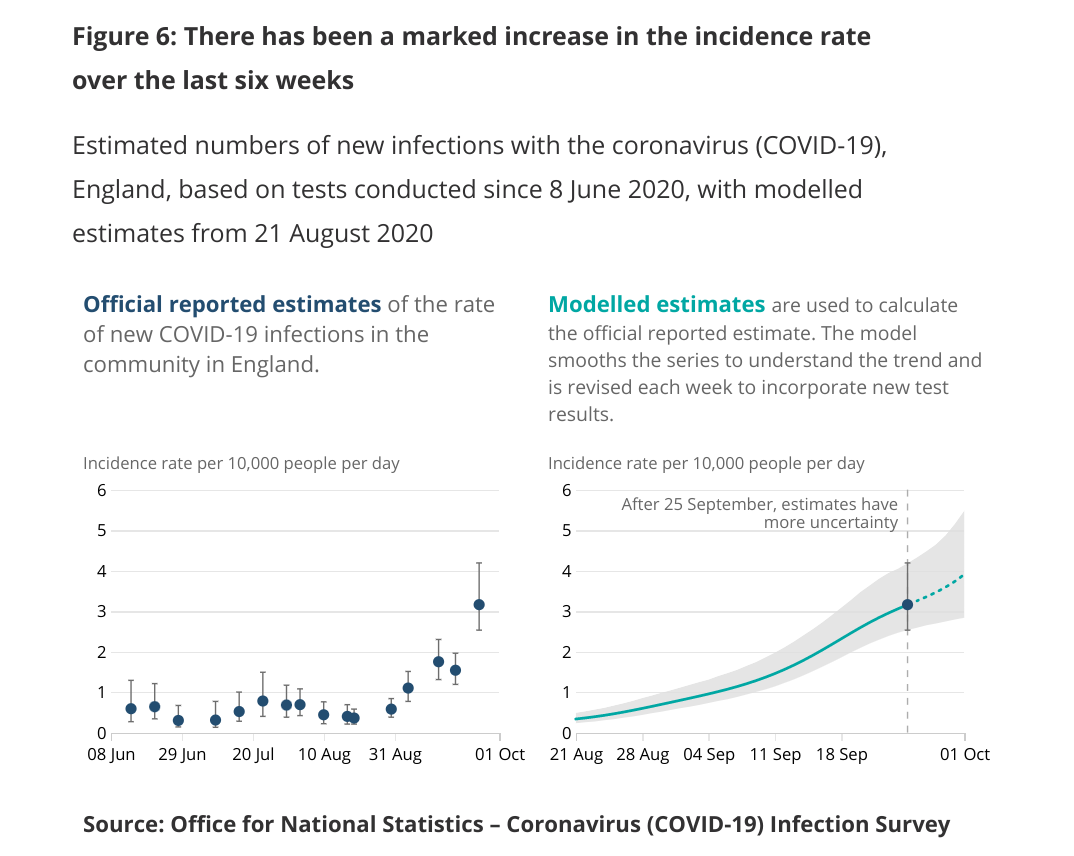 From September 25 to October 1 the ONS estimates that 224,400 people in England have had the coronavirus, this equates to around 1 in 240 people.

This is the equivalent of around 0.41 per cent of the population.

The ONS stated that there has been a "marked increase" in cases over the last six weeks.

The figures do not include people staying in hospitals, care homes or other institutional settings.

The figures from the ONS come as data from the Covid Symptom Tracker App revealed that the UK is currently recording 21,903 new cases of the virus each day.

This is an increase of 1,000 cases in the last seven days.

As more local lock downs are expected in the North of England, the data revealed that there is a stark divide between the North and the South.

It found that there are five times more cases in the North than the South, with the majority of new cases being found in the North East and Yorkshire – where there have been 5,425, the data suggests.

The data also revealed that infections in the South are currently below 1,000 daily, with 985 and 914 respectively.

The experts stated: "The top three areas of concern with one in 100 estimated people infected are around Glasgow, Nottingham and Sheffield according to our data."

Data from the app backs that from the ONS that also states that the worst infections are in the North East and Yorkshire.

Graphs produced by the ONS show a clear increase in cases in the North East, the North West and Yorkshire and The Humber.

The South East and the East of England has remained near enough flat and just slight increases can be seen in areas such as the East Midlands, the West Midlands, London and the South West. 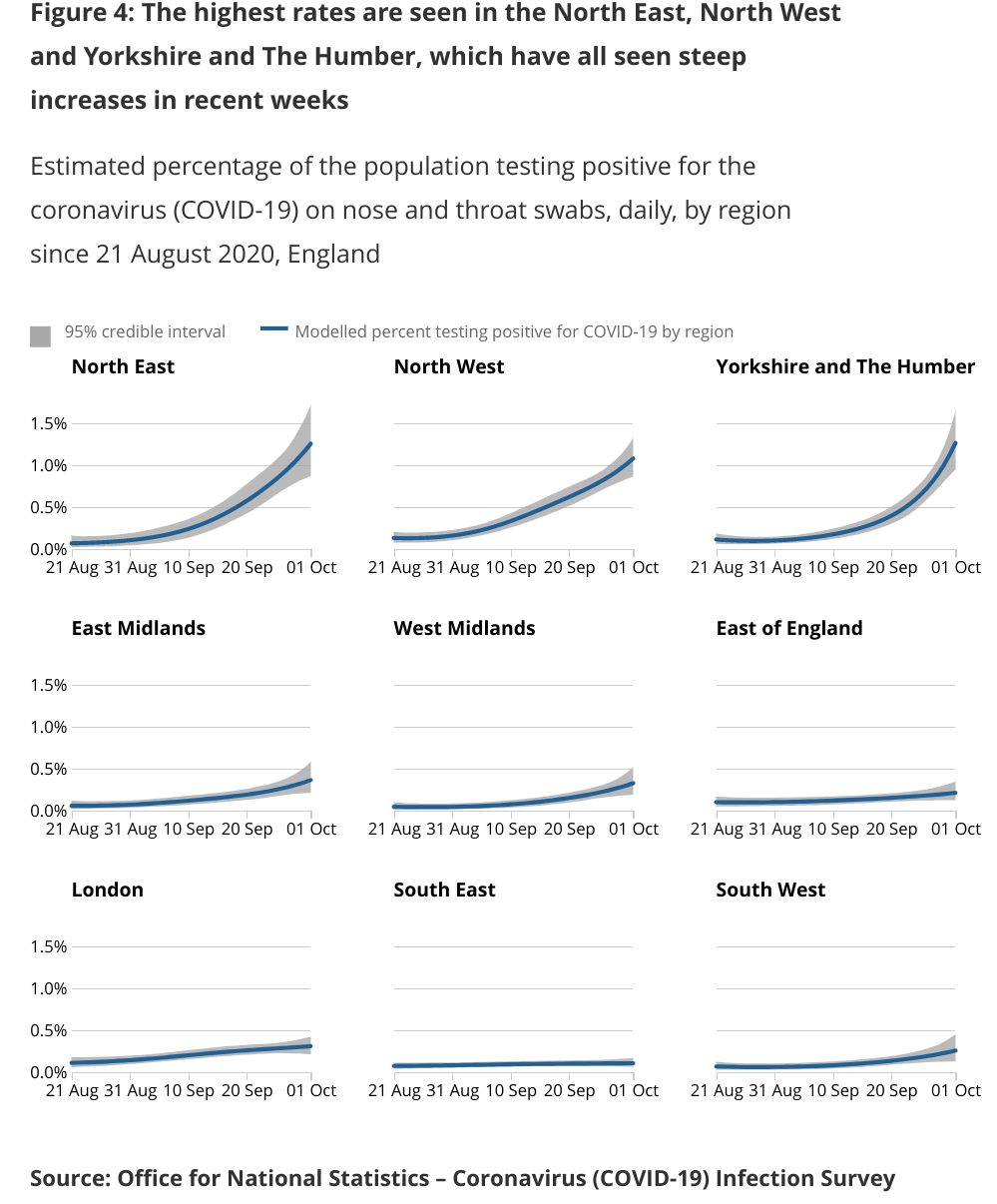 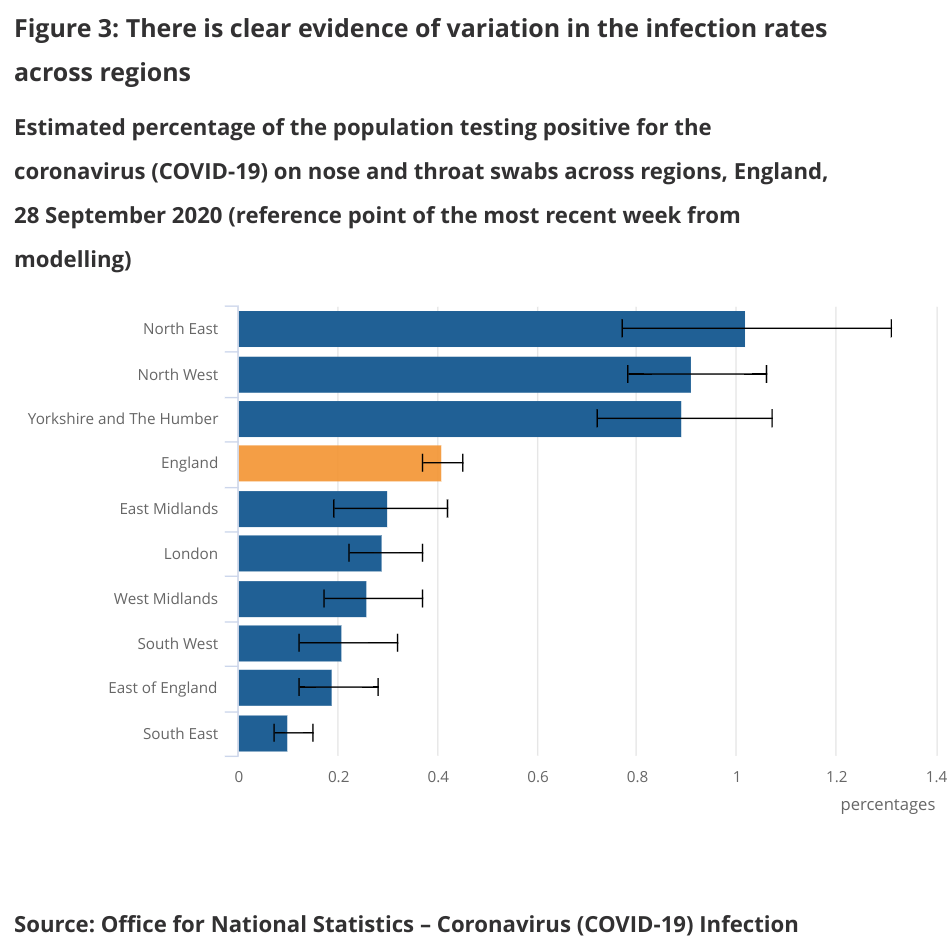 Looking at age as a factor in infection rates and the ONS stated that there has been an increase in younger people contracting the virus.

Graphs shows that the biggest increase is in kids who are 17 aged 24.

Case rates have remained almost flat in elderly age groups and this comes after data from experts at Oxford University revealed that the average age of death from the coronavirus is 82.4 years.

This is slightly higher than deaths caused by other illnesses, which has a median age of 81.5.

It comes after a Whitehall source revealed that the government are "mulling over" plans to once again shield hundreds of thousands of vulnerable Brits. 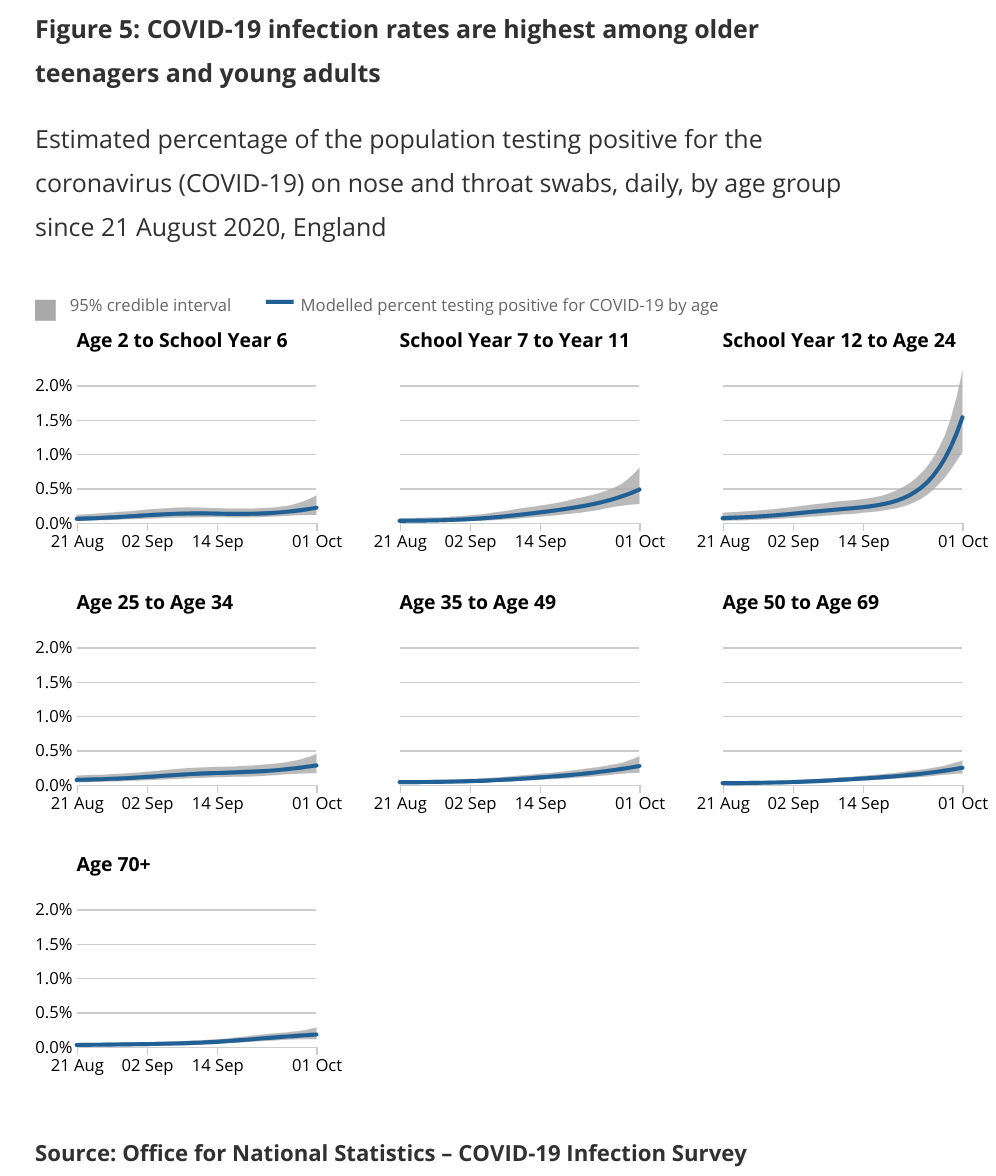 The government could advise clinically vulnerable people to shield as part of the top tier of a streamlined Covid lockdown system set to be announced next week.

The data from the Covid Symptoms Tracker App today also revealed that the R rate in England is currently at 1.0.

Despite a rise in infections, the experts said that the estimated R rate is a "positive sign that the upward trend that was seen a few weeks ago has slowed down, but is still rising".

The experts said that this is the second week in a row that R rates have come down.

This is different to the official R rate which is released by the government every Friday afternoon.

A record number of Brits were confirmed positive on Thursday, with 17,540 new infections – a steep increase on the 6,914 cases confirmed just a week earlier.

NHS data also revealed more than 600 Brits were admitted to hospital on Sunday — the largest number since early June.

There were also 77 coronavirus deaths reported on Thursday, the highest daily figure for more than three months. 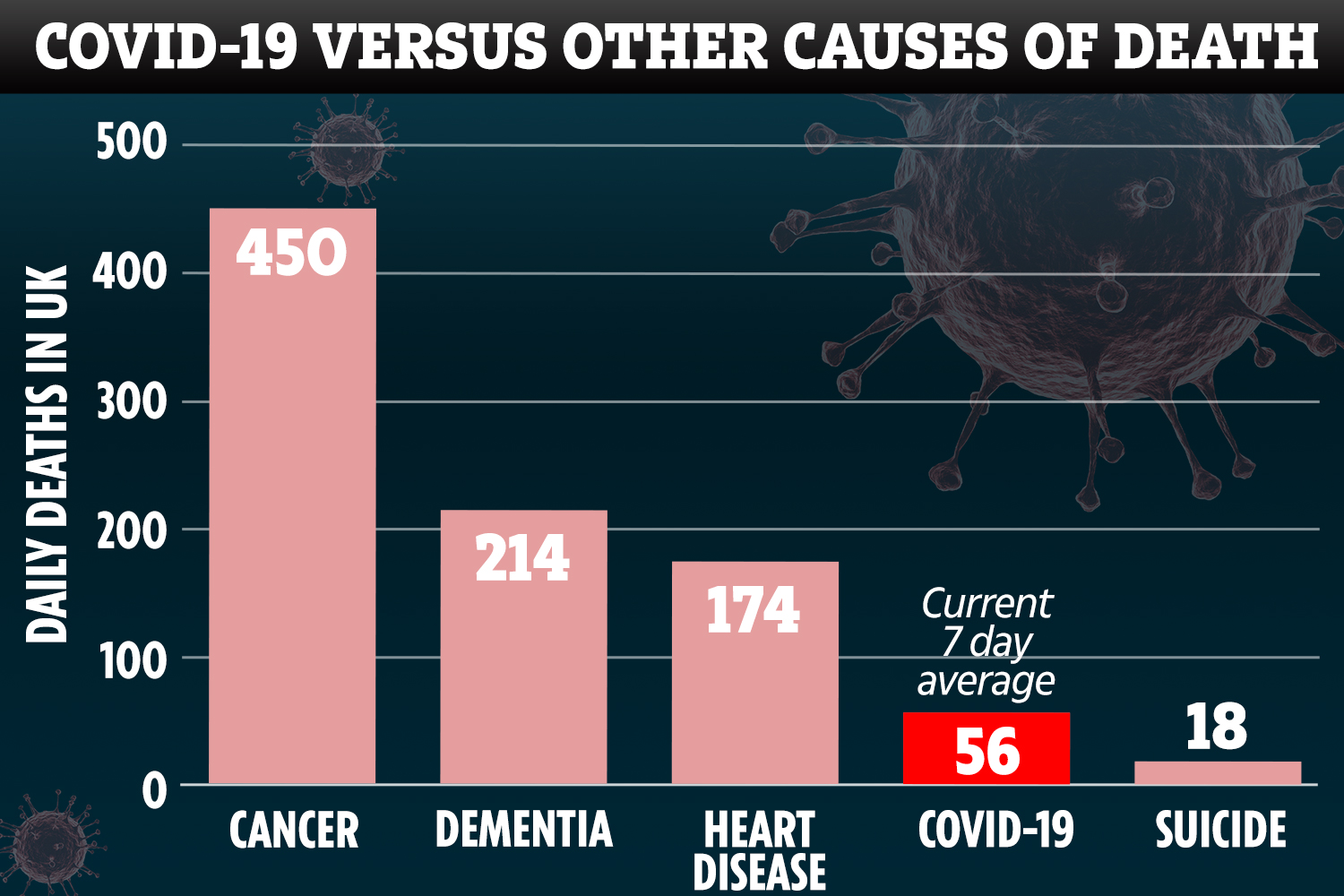 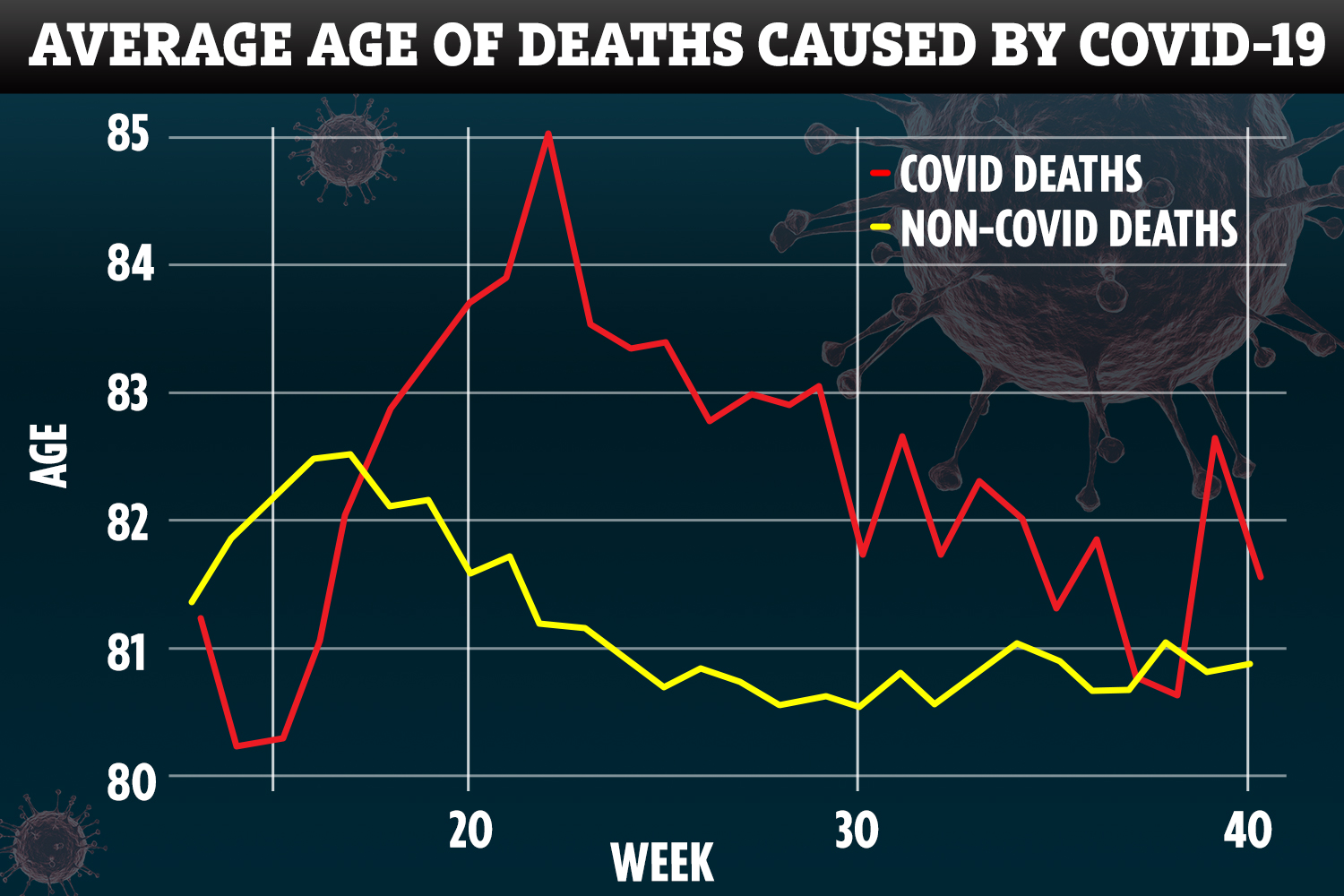 Tim Spector, Professor of Genetic Epidemiology at King's College London said that it was unclear if restrictions were helping to curb the spread.

"It’s unclear yet if local measures like the 10pm curfew have had a real impact but what is important is that people understand the risks in their area and the range of early symptoms found on the app.

"The key to get this virus back under control is to follow the guidelines around self isolation.

"If you think you might have Covid-19 stay at home, get better and help to keep others safe and stop the spread of this virus.”