With its 65-7 demolition of TCU on Monday night in Los Angeles, Georgia became the first team since Alabama in 2011 and 2012 to win back-to-back national championships.

It was a dominant effort from the Bulldogs, who needed a heart-stopping fourth-quarter comeback to get past Ohio State in the College Football Playoff semifinals.

Head coach Kirby Smart was not pleased with the way his team played vs. the Buckeyes. In this one, Georgia was locked in from the opening kickoff.

And by the time halftime rolled around, Georgia had built an insurmountable 38-7 lead.

Everything was clicking for Georgia. The offense scored on every first-half possession while the defense forced three turnovers as the Bulldogs cruised to their third national championship in program history.

Some plays were more important than others as the Bulldogs built their lead. Here are the five plays that powered the win. 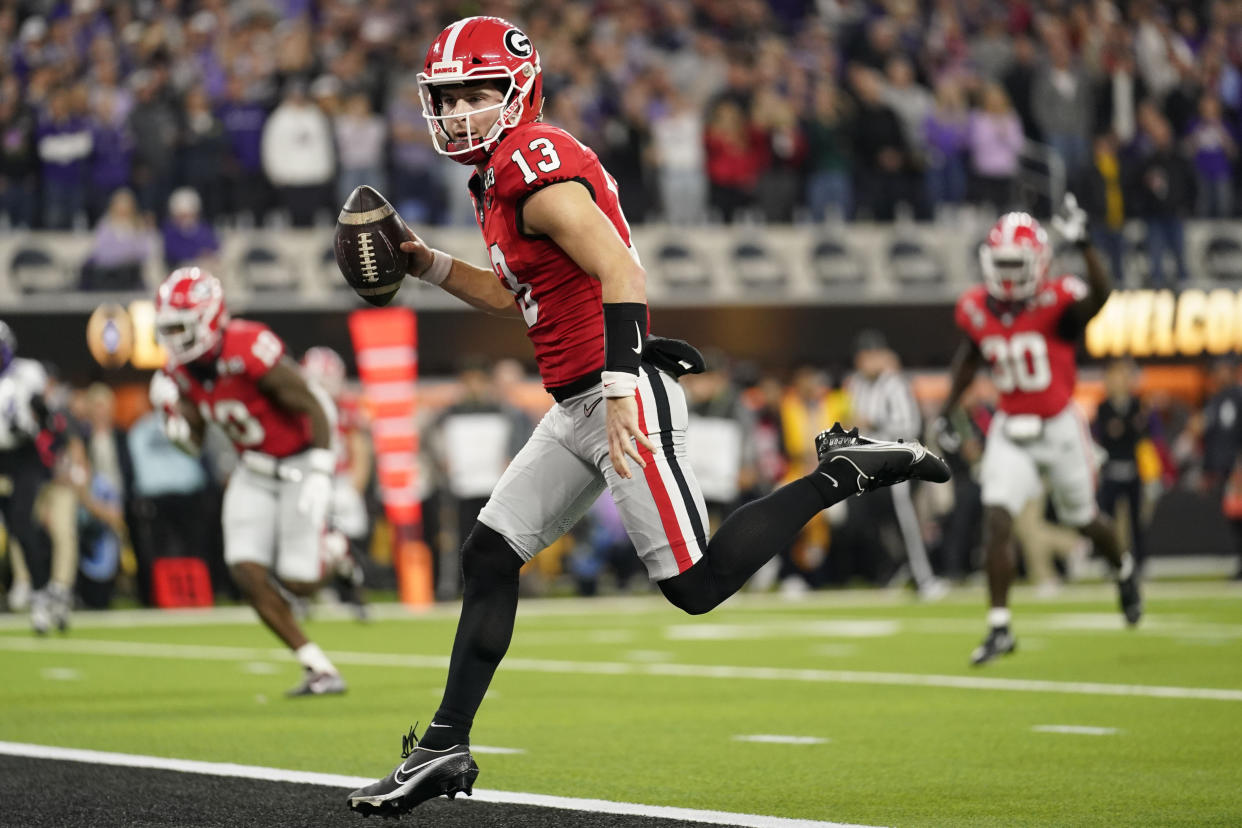 Georgia’s defense forced a TCU three-and-out to open the game, allowing the offense to quickly get to work.

Stetson Bennett, Georgia’s senior quarterback, was in a groove from his first throw. He found Brock Bowers for 21 yards and then again for 12 more yards. And on the fifth play of the opening drive, Bennett showed off an underrated part of his game — his speed.

On first-and-10 from the TCU 21, Bennett kept the ball on a zone read and exploded into the second level, going untouched into the end zone for the game’s first touchdown.

Stetson Bennett with the keeper 21 yards to the house!

7-0 Georgia early on in the #CFP National Championship Game. 🏈🏆 pic.twitter.com/9x9TNjVcqH

That play set the tone for what would be an incredible night for Bennett in his final college game.

After falling behind 10-0, TCU took advantage of a miscue in the Georgia secondary and hit a 60-yard passing play to set up a touchdown.

At 10-7, it looked like TCU may have shaken off the early nerves and would give Georgia a game. That turned out not to be the case.

On the ensuing possession, Georgia needed just four plays to go 70 yards and put another touchdown on the board. Todd Monken, Georgia’s play-caller, had the TCU defense completely off-balance.

Bennett’s 37-yard touchdown pass to Ladd McConkey was a perfect example of that.

A play-action fake to Kenny McIntosh completely froze TCU defensive back Tre’Vius Hodges-Tomlinson, allowing McConkey to run free behind the defense for an easy touchdown.

The Bennett-to-McConkey connection increased UGA’s lead to 17-7 with 2:43 to go in the first quarter.

When the score was still 17-7, TCU decided to punt on fourth-and-6 from Georgia’s 47. The punt pinned the Bulldogs at their own 8-yard line. It didn’t take long for Georgia to move past midfield, but it looked like TCU’s defense was going to get off the field when UGA faced a third-and-10.

TCU brought pressure from Dee Winters off the edge. Winters went unblocked and had a clear shot at Bennett.

But Bennett reacted in an instant, rolled left and beat Winters to the edge. Bennett gained 12 yards to pick up a first down.

Five plays later, Georgia was in the end zone again as Bennett pranced in from 6 yards out to make it 24-7.

At that point, it was clear which direction this game was headed.

Stetson Bennett gets his 2nd rushing TD of the night! #NationalChampionshippic.twitter.com/gwCs8ovM3q

On the next possession, TCU quarterback Max Duggan had a major missed opportunity.

Duggan, the Heisman runner-up, had surefire first-round receiver Quentin Johnston streaking across the middle on a deep post.

Johnston was open, but Duggan side-stepped a Georgia defender and sailed the throw. It was intercepted by Georgia’s Javon Bullard.

That interception put the ball back in Bennett's hands, and he led Georgia back into the end zone.

When you thought things couldn’t get worse for TCU, they did.

TCU’s offense was back on the field down 31-7 in the final minutes of the half when Duggan threw another interception. Bullard was the man for the Bulldogs once again.

Two plays later, Georgia capped off its first-half barrage with another Bennett touchdown. This time, he hit Adonai Mitchell for a 22-yard score.

It was a remarkable one-handed catch from Mitchell to put the Bulldogs up 38-7 at the break.

The lead was way too much for TCU to overcome.

WHAT A CATCH FROM ADONAI MITCHELL 😱