Washington: As the second impeachment trial of his predecessor was under way on Thursday (AEDT), Joe Biden held his first call as US President with Xi Jinping, pressing the Chinese President about trade and Beijing’s crackdown in Hong Kong, as well as other human rights concerns.

The two leaders spoke just hours after Biden announced plans for a Pentagon taskforce to review US national security strategy on China and after announcing he was levying sanctions against Myanmar’s military regime following this month’s coup in the South-east Asian country.

A White House statement said Biden raised concerns about Beijing’s “coercive and unfair economic practices”. Biden also pressed Xi on abuses against Uighur Muslims and ethnic minorities in the western Xinjiang province, and its actions towards Taiwan which Beijing wants the world to recognise as part of China. 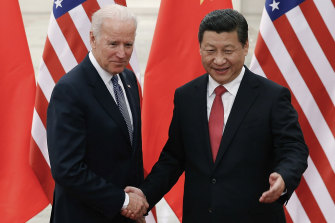 It said Biden expressed misgivings about China’s growing restrictions on political freedoms in Hong Kong and “increasingly assertive actions in the region, including towards Taiwan,” in the call. Beijing has recently increased flyovers of the Taiwan Strait.

Biden, who wished Xi a happy Lunar New Year, was “committed to pursuing practical, results-oriented engagements when it advances the interests of the American people and those of our allies,” the statement said.

Biden, who had dealt with Xi while vice-president under Barack Obama, used his first three weeks in office to make several calls with other leaders in the Indo-Pacific region. He has tried to send the message that he would take a radically different approach to China than former president Donald Trump, who placed trade and economic issues above all else in the bilateral relationship.

With Japanese Prime Minister Yoshihide Suga late last month, Biden underscored the US commitment to protecting the Senkaku Islands, a group of uninhabited islets administered by Tokyo but claimed by Beijing. In his call with India’s Prime Minister Narendra Modi, Biden emphasised the need for “close cooperation to promote a free and open Indo-Pacific”. And in his call with Australian Prime Minister Scott Morrison last week, the US President highlighted the two nations’ alliance was essential to stability in the region.

Xi in turn told Biden confrontation between China and the US would be a disaster and the two sides should re-establish the means to avoid misjudgments.

According to an account of the discussions reported by Chinese state television, Xi reiterated cooperation was the only choice and that the two countries needed to properly manage disputes in a constructive manner. 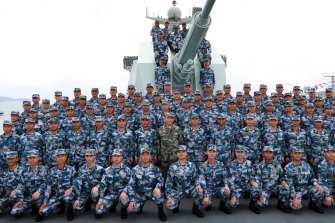 Chinese President Xi Jinping, center in green military uniform, poses with soldiers on a navy ship after he reviewed his navy fleet in the South China Sea in 2018 China has conducted several live-fire military exercises in the Taiwan Strait amid heightened tensions over increased American support for Taiwan. Credit:Xinhua/AP

Xi hoped the US would handle Taiwan, Hong Kong and Xinjiang matters that related to China’s sovereignty and territorial integrity cautiously.

He called for Beijing and Washington to re-establish various mechanisms for dialogue in order to understand each others’ intentions and avoid misunderstandings, the report said.

Top aides to Biden have repeatedly heard from Asia-Pacific counterparts who had become discouraged by Trump’s frequently sharp rhetoric aimed at allies, talk of reducing troop levels in South Korea and odd interactions with North Korean dictator Kim Jong-un, according to a senior administration official who spoke on condition of anonymity to discuss the private calls.

Biden has criticised Trump for failing to strengthen US economic muscle and making China policy on the fly. The official acknowledged that it would likely take years for the strategy to play out, so the focus is on making it sustainable.

The Biden team is reviewing actions put in place by the Trump administration, including its imposition of tariffs on more than $US350 billion ($452 billion) in Chinese goods. While that review continues, the existing tariffs remain in place until decisions have been made on what adjustments to make, the official said.

The White House is planning to consult with Congress and allies to work through sources of leverage as crafts a sharper, more effective trade strategy. Key Cabinet members involved in the review, including the US trade representative and commerce secretary, have yet to be confirmed.

Allies in the region have made clear to the US that they want a more purposeful and steady approach to engagements in future, according to the official.