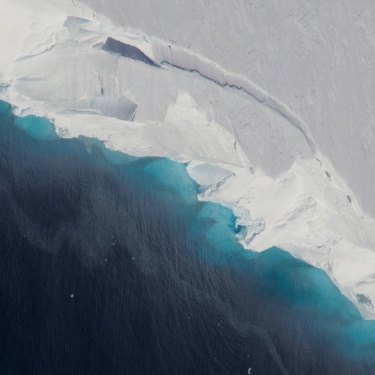 The ice shelf was cracking up. Surveys showed warm ocean water eroding its underbelly. Satellite imagery revealed long, parallel fissures in the frozen expanse, like scratches from some clawed monster. One fracture grew so big, so fast, scientists took to calling it “the dagger”.

“It was hugely surprising to see things changing that fast,” said Erin Pettit. The Oregon State University glaciologist had chosen this spot for her Antarctic field research precisely because of its stability. While other parts of the infamous Thwaites Glacier crumbled, this wedge of floating ice acted as a brace, slowing the melt. It was supposed to be boring, durable, safe. 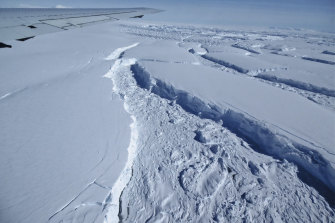 Large icebergs calving from the Thwaites Glacier, part of the West Antarctic Ice Sheet, in November 2014

Now climate change has turned the ice shelf into a threat – to Pettit’s field work and to the world.

Planet-warming pollution from burning fossil fuels and other human activities has already raised global temperatures more than 1.1 degrees Celsius. But the effects are particularly profound at the poles, where rising temperatures have seriously undermined regions once locked in ice.

In research presented this week at the world’s biggest earth science conference, Pettit showed that the Thwaites ice shelf could collapse within the next three to five years, unleashing a river of ice that could dramatically raise sea levels.

Up north, aerial surveys document how warmer conditions have allowed beavers to invade the Arctic tundra, flooding the landscape with their dams. Large commercial ships are increasingly infiltrating formerly frozen areas, disturbing wildlife and generating disastrous amounts of rubbish. In many Alaska Native communities, climate impacts compounded the hardships of the coronavirus pandemic, leading to food shortages among people who have lived off this land for thousands of years.

“The very character of these places is changing,” said Twila Moon, a glaciologist at the National Snow and Ice Data Centre and co-editor of the Arctic Report Card, an annual assessment of the state of the top of the world. “We are seeing conditions unlike those ever seen before.”

The rapid transformation of the Arctic and Antarctic creates ripple effects all over the planet. Sea levels will rise, weather patterns will shift and ecosystems will be altered. Unless humanity acts swiftly to curb emissions, scientists say, the same forces that have destabilised the poles will wreak havoc on the rest of the globe.

“The Arctic is a way to look into the future,” said Matthew Druckenmiller, a scientist at the National Snow and Ice Data Centre and another co-editor of the Arctic Report Card. “Small changes in temperature can have huge effects in a region that is dominated by ice.”

“The Arctic is a way to look into the future.”

This year’s edition of the report card, which was presented at the American Geophysical Union annual meeting on Tuesday, describes a landscape that is transforming so fast scientists struggle to keep up. Temperatures in the Arctic are rising twice as fast as the global average. The October to December 2020 period was the warmest on record, scientists say.

Separately on Tuesday, the World Meteorological Organisation confirmed a new temperature record for the Arctic: 38 degrees in the Siberian town of Verkhoyansk on June 20, 2020.

These warm conditions are catastrophic for the sea ice that usually spans across the North Pole. This past northern summer saw the second-lowest extent of thick, old sea ice since tracking began in 1985. Large mammals like polar bears go hungry without this crucial platform from which to hunt. Marine life ranging from tiny plankton to giant whales are at risk.

The consequences of this loss will be felt far beyond the Arctic. Sea ice has traditionally acted as Earth’s “air conditioner”; it reflects as much as two-thirds of the light that hits it, sending huge amounts of solar radiation back into space.

Record highs have also sounded the death knell for ice on land. Three historic melting episodes struck Greenland in July and August, causing the island’s massive ice sheet to lose about 34 trillion kilograms. On August 14, for the first time in recorded history, rain fell at the ice sheet summit. 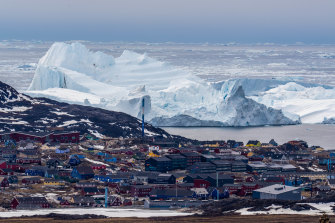 “I think my jaw would have hit the floor,” Moon said, imagining what she might have felt had she witnessed the unprecedented event. “This fundamentally changes the character of that ice sheet surface.”

Though the Greenland ice sheet is more than a mile thick at its centre, rain can darken the surface, causing the ice to absorb more of the sun’s heat, Moon said. It changes the way snow behaves and slicks the top of the ice.

The consequences for people living in the Arctic can be dire. In Greenland and elsewhere, meltwater from shrinking glaciers has deluged rivers and contributed to floods. Retreating ice exposes unstable cliffs that can easily collapse into the ocean, triggering deadly tsunamis. Roads buckle, water systems fail and buildings cave in as the permafrost beneath them thaws.

Some 5 million people living in the Arctic’s permafrost regions are at risk from the changes happening at their shores and under their feet.

“It’s not just about polar bears, it’s about actual humans,” said Rick Thoman, a climate specialist at the International Arctic Research Centre at the University of Alaska Fairbanks and another co-editor of the report card. “These changes are impacting people and their lives and livelihoods from ‘what’s for dinner tonight?’ up to the international scale.”

“It’s not just about polar bears, it’s about actual humans. These changes are impacting people and their lives and livelihoods.”

In Antarctica, University of Colorado-Boulder glaciologist Ted Scampos said “climate change is more about wind changes and ocean changes than warming – although that is happening in many parts of it as well.”

Though the continent stays frozen for much of the year, rising temperatures in the Pacific have changed how air circulates around the South Pole, which in turn affects ocean currents. Warm, deep ocean water is welling up towards coastlines, lapping at the ice sheet’s weak frozen underbelly, weakening it from below.

“This is triggering the beginnings of a massive collapse,” Scampos wrote in an email from Antarctica’s McMurdo Station, where he is preparing for a field trip to Thwaites Glacier’s failing ice shelf.

The disintegration of the Thwaites ice shelf won’t immediately increase sea levels – that ice already floats on top of the water, taking up the same amount of space whether it’s solid or liquid. But without the ice shelf acting as a brace, the land-bound parts of the glacier will start to flow more quickly. Thwaites could become vulnerable to ice cliff collapse, a process in which towering walls of ice that directly overlook the ocean start to crumble.

‘We don’t know exactly if or when ice cliff failure is going to initiate, but we’re certain Antarctica is going to change.’

If the entire glacier failed, it would raise sea levels by several feet. Island nations and coastal communities would be inundated.

“We don’t know exactly if or when ice cliff failure is going to initiate,” said Anna Crawford, a glaciologist at the University of St Andrews who works on models of the process. “But we’re certain Antarctica is going to change.”

“There’s ample evidence to support reducing emissions,” she added, “because it’s giving us enough to be worried about already.”

For some in the Arctic, this rapid thaw represents opportunity. Tundra vegetation flourishes in the warmer weather. Beavers have migrated northwards, digging their paws into the once-frozen earth.

Satellite images show that the number of beaver ponds in western Alaska – formed when the large rodents build their dams along waterways – has at least doubled since 2000. These ponds can contribute to the rapid thaw of permafrost, unleashing carbon that has been locked in soil for thousands of years. But it’s not yet clear what beaver engineering means for the planet, or even for the ecosystems just downstream. 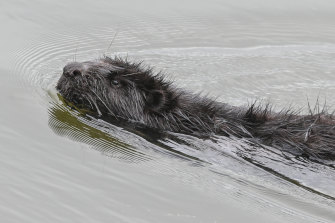 As the Arctic tundra has thawed, beavers have headed north and built dams, flooding ecosystems. Credit:Getty

Warmer conditions have also allowed people to infiltrate new environments, and here the detrimental impacts are plain to see. New shipping routes have been established through areas once blocked by sea ice, disrupting wildlife and polluting the ocean with unnatural noise.

Passing ships also leave behind huge amounts of rubbish; in the summer of 2020, hundreds of items washed ashore in Alaskan communities along the Bering Strait. Residents – most of them Alaska Natives – found clothes, equipment, plastic food packaging and cans of hazardous oils and insecticides in waters where they regularly fish. Labels in English, Russian, Korean and a host of other languages illustrated the international nature of the problem.

For many Arctic residents, climate change is a threat multiplier – worsening the dangers of whatever other crises come their way. Another essay in the report card documents the threats to Alaska Natives’ food security caused by the coronavirus pandemic. Quarantine restrictions prevented people from travelling to their traditional harvesting grounds. Economic upheaval and supply chain issues left many supermarkets with empty shelves.

But the essay, which was co-written by Inupiaq, Hadia, Ahtna and Supiaq researchers, along with experts from other Native communities, also highlights how Indigenous cultural practices helped communities stave off hunger. Existing food sharing networks redoubled their efforts. Harvesting traditions were adapted with public health in mind.

“Our people, we’ve had to have these underlying characteristics of resiliency, sharing, respect,” said Erickson, the Inupiaq researcher. “We focus on practical solutions, otherwise we won’t survive.”

“The rest of the world,” he added, “is going to have to face that as well.”

Though no place on Earth is changing as fast as the Arctic, rising temperatures have already brought similar chaos to more temperate climes as well. Unpredictable weather, unstable landscapes and collapsing ecosystems are becoming facts of life in communities around the globe.

None of this represents a “new normal,” Moon cautioned. It’s merely a pit stop on a path to an even stranger and more dangerous future.

Global greenhouse gas emissions are on track to keep rising. Governments and businesses have not taken the steps needed to avert catastrophic warming beyond 1.5 degrees above pre-industrial levels. There is every reason to believe that instability at the poles – and around the planet – will get worse.

But achieving the best case climate scenarios could cut the volume of ice lost from Greenland by 75 per cent, research suggests. International cooperation could prevent garbage from getting into the oceans and alleviate the effects of marine noise. Better surveillance and early warning systems can keep people safe when melting triggers landslides and floods.

“There’s such a big range and difference in what the future of the Arctic and the future anywhere on our globe can look like,” Moon said. “It all depends on human actions.”