Dusting off the past: Specialist cleaners remove lockdown grime from the exhibits at the British Museum as it prepares to reopen later this month

Specialist cleaners have been removing lockdown grime from ancient exhibits at the British Museum as it prepares to reopen later this month.

Historic statues from around the world have been gathering dust after the museum was forced to close due to the coronavirus pandemic in March.

More than 30 staff members have been working on dusting the museum’s collections for around three weeks.

Ladders and a cherry-picker have to be used to clean some of the larger objects, including a totem pole, before the museum reopens on August 27.

Fabiana Portoni, the museum’s preventive conservator and dust expert, said that the accumulation of dust particles on the museum’s ancient artefacts can cause long-term damage. 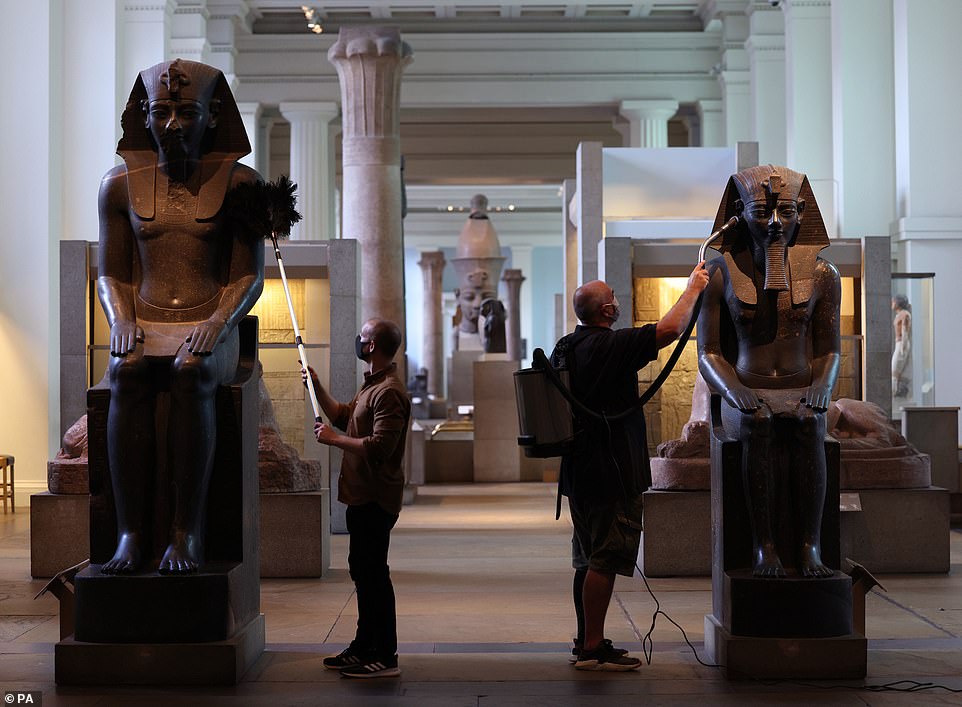 Dust has gathered on ancient Egyptian sculptures at the British museum, but specialist cleaners have been sprucing them up before visitors return next week 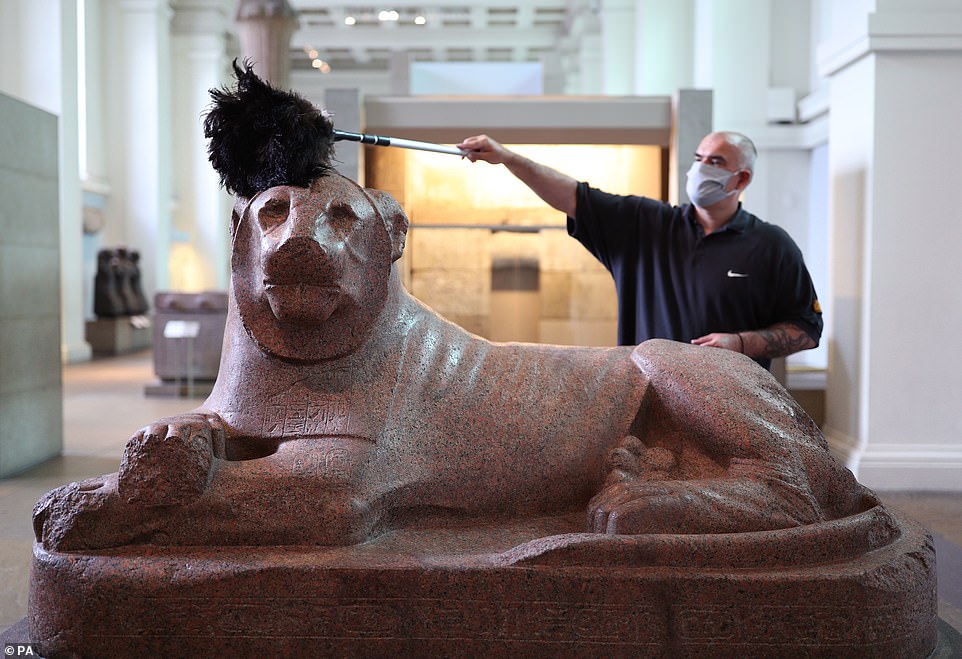 Evan York dusted a statue of King Amenhotep III as a lion, which dates back to the 2nd century BC, ahead of the British Museum reopening on August 27 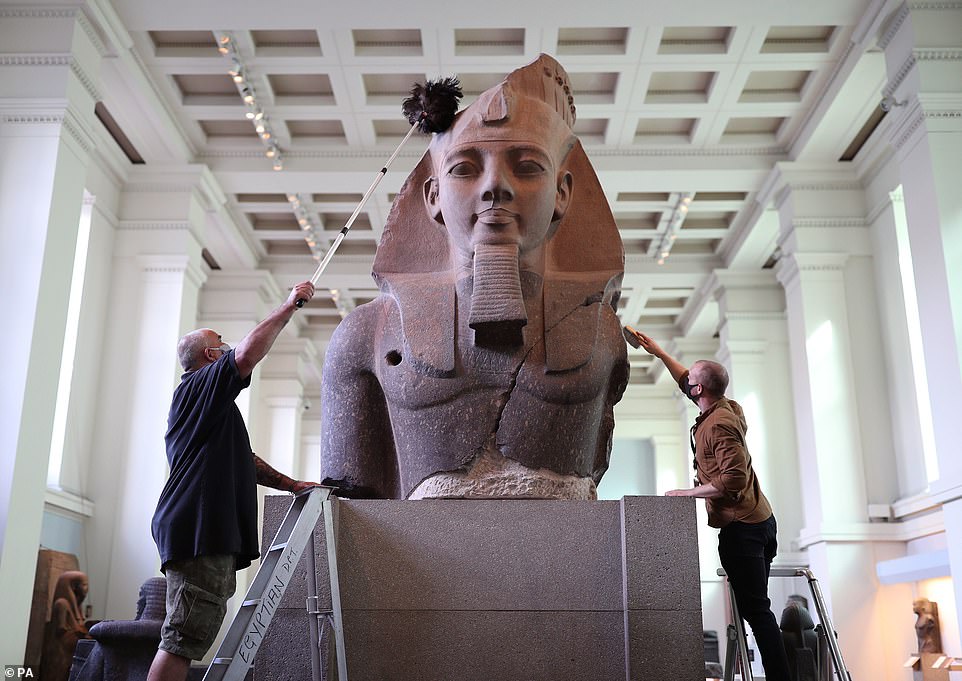 The accumulation of dust particles on the museum’s ancient artefacts, such as the seated Egyptian statue of King Ramesses II, can cause long-term damage to exhibits

The major sources of dust in the museum include visitors, who can bring in dust from hair fibres or their clothes, and nearby traffic pollution, she said.

Ms Portoni told the PA news agency: ‘During lockdown, all of these sources were reduced however there was still dust present around the museum.’

The shortage of people flowing through the galleries and disrupting the air meant dust accumulated in more unusual places where it wouldn’t normally be expected to be found, she added.

Only limited cleaning took place while the museum was closed, Ms Portoni said.

Physical dusting and chemicals are used to clean objects, she added, but great care has to be taken as removing the dust can also damage an object’s surface.

Ms Portoni said the museum’s closure provided a fantastic opportunity to do a deep clean. 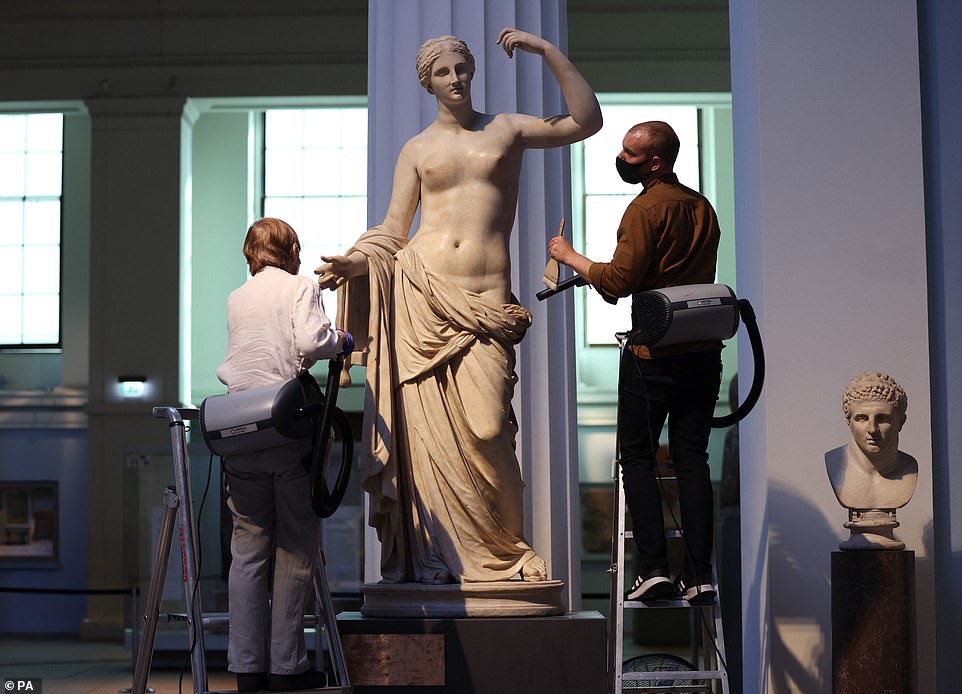 ‘A lot of these objects, to be able to clean them, they require ladders and different equipment and we have to do it before opening or after opening, so the timing is a little bit reduced,’ she said.

‘But now, because we are closed, we can spend hours cleaning and there’s no rush, so it is a good opportunity for that.’

The London venue will have been shut for 163 days by the time it welcomes back visitors, which is the longest peacetime closure in its 261-year history. 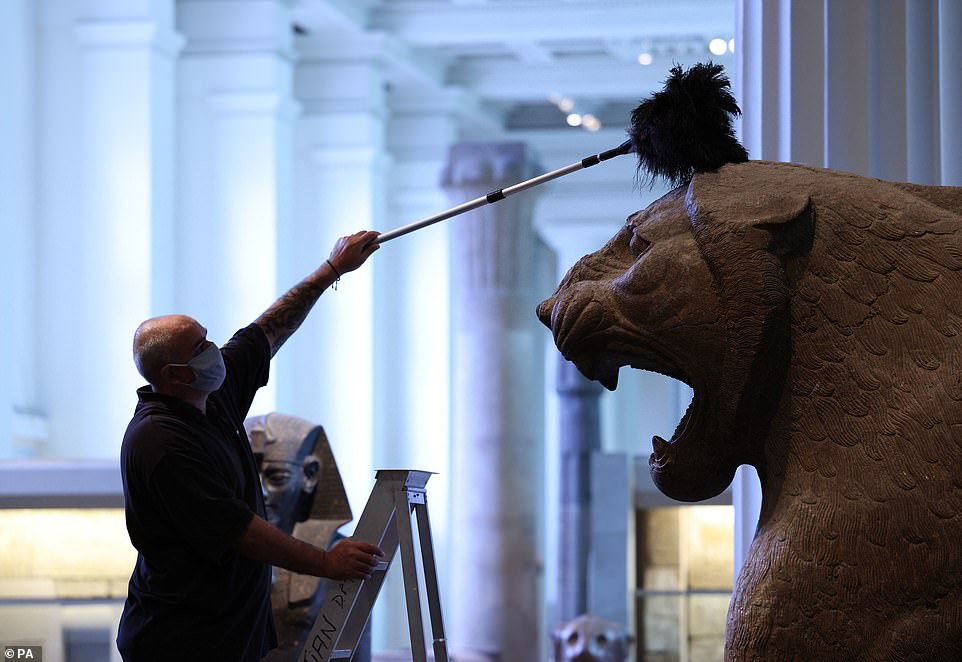 Anyone wishing to visit the British Museum will need to pre-book. They will have to follow a one-way route around the collection to see exhibits such as a colossal guardian lion statue around 860BC, which symbolised Ishtar, the Assyrian goddess of war 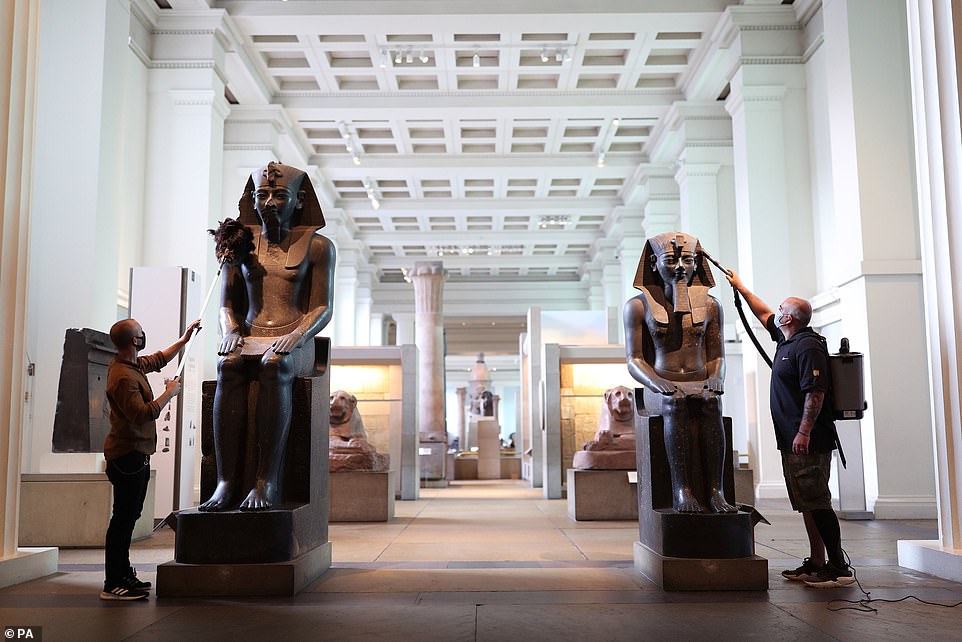 Other sites such as the Natural History Museum, the Victoria & Albert Museum, The National Gallery and Tate venues have already reopened 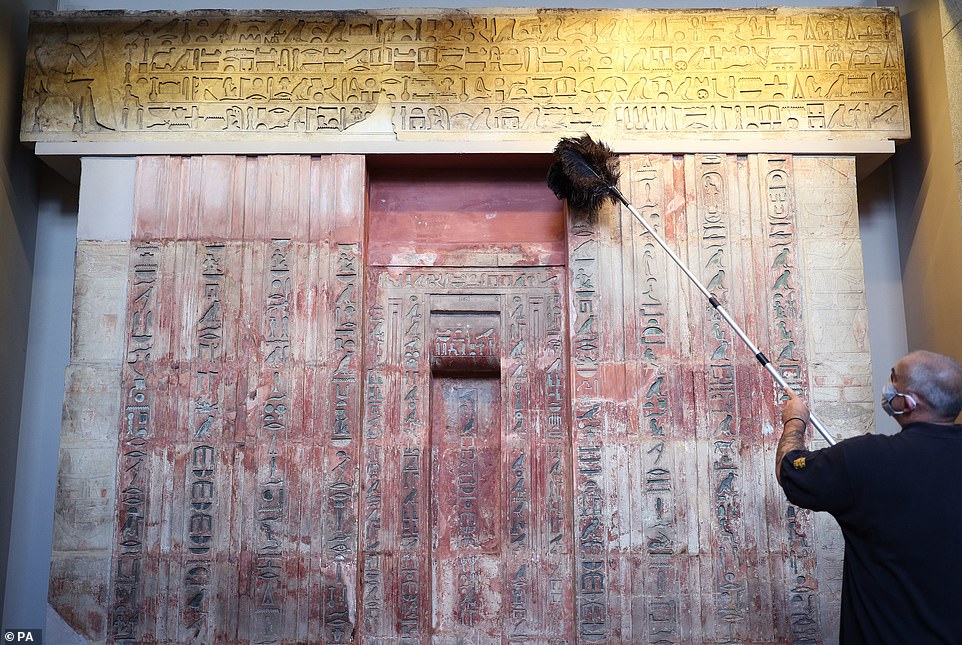 Dating back to the third century BC, cleaners paid special attention while dusting the false-door and architrave of Ptahshepses 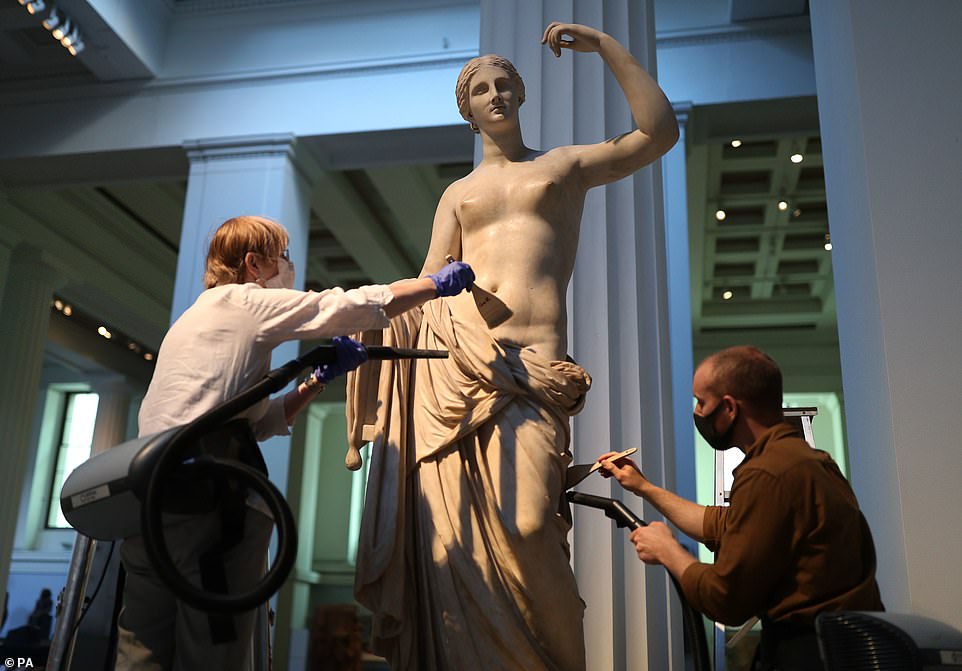 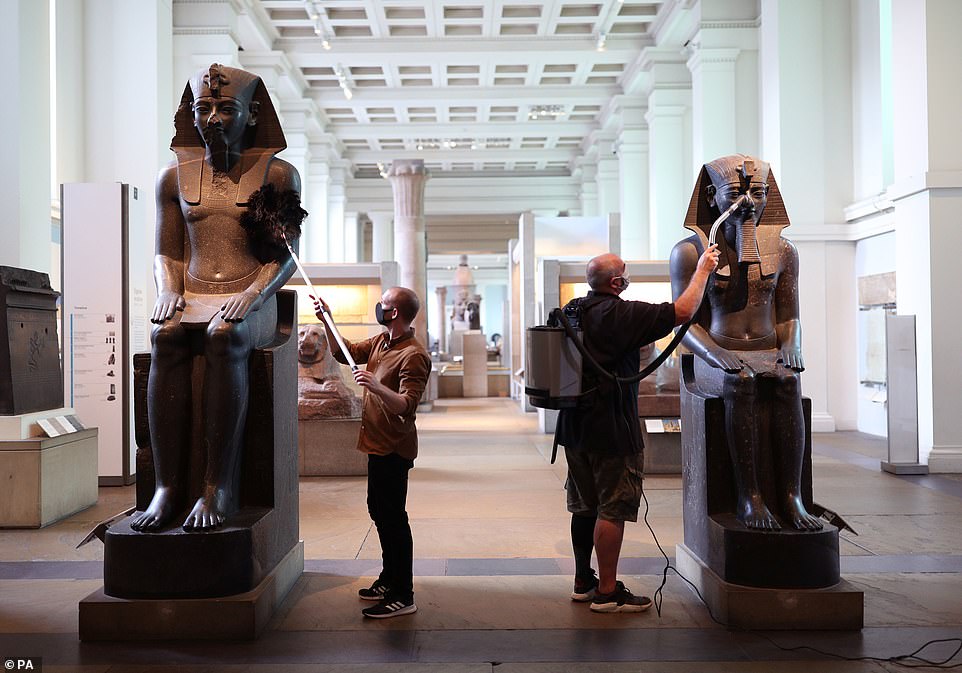 Visits to the museum will need to be pre-booked and a one-way route will be installed around some of its galleries.

Tickets for the day the museum welcomes back visitors have already sold out.

Other museums and galleries including the Natural History Museum, the Victoria & Albert Museum, The National Gallery and Tate venues in Liverpool, London and St Ives have all already reopened.