Christchurch: A person allegedly murdered by the accused Christchurch mosque shooter has turned out to be alive and well.

When the alleged gunman appeared in the Christchurch District Court on Saturday he faced one charge of murdering a woman whose name was then suppressed by Judge Paul Kellar. 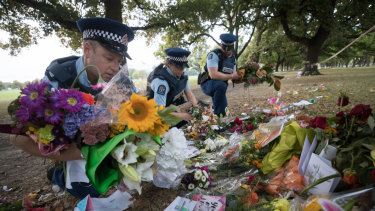 Police at the memorial to the victims of the Al Noor Mosque shooting.Credit:Jason South

The name has caused much confusion with the media which have been trying to compose a list of the fatalities. Because the woman's name was included in the list, the number of fatalities came to 51. However police were adamant that the true number of victims was 50.

Detective Superintendent Chris Page on Thursday said police had made a mistake, by charging the alleged gunman with killing a person who was connected to the shootings but was still alive.

"We have been to see her today [on Thursday] and apologised. The name was supposed to represent many victims and someone was just trying to do the right thing.

"We made a mistake and we will own it," he said.

He would not say how the woman was connected to the fatalities. Her name remains suppressed.

Mr Page said the charge sheet would be amended on the alleged shooter's next appearance on April 5 when he would face "a bundle" of new charges.

The mistake did not affect the validity nor legality of the prosecution, he said.

Police on Thursday confirmed they had identified all 50 people killed in the mosque shootings.

As funerals continued on Thursday, the identity of the 50th victim was released by police.

He was Mohamad Moosid Mohamedhosen, 54, who was born in Mauritius and came from the town of Vacoas.

Mauritius is an island off the coast of Madagascar, with a population of about 1.2 million. A minority of its population are Muslim. Mohamedhosen had lived in England, where he started a graphic design company, according to company records.

He lived in Linwood, and was killed at the Linwood Islamic Centre.

His family has flown to New Zealand and declined to comment. His funeral was held on Thursday morning.

Tarmizi was at the mosque with his parents and younger brother. His father, Mohammed Tarmizi Shuib, was shot twice and is in hospital in a stable condition.

The coroner's office began releasing bodies on Tuesday after an extensive identification process.