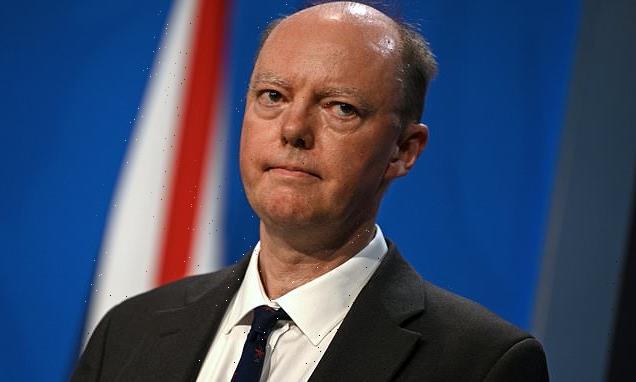 Professor Chris Whitty has urged people not to delay getting the Covid vaccine, saying there are some ‘very sick’ young adults in hospital with the virus.

England’s chief medical officer branded it ‘stark’ that the majority of Covid patients have not had their jabs.

He said he had spent four weeks working on a Covid ward and told how many ‘regret delaying’ their vaccination.

It came as Public Health England figures showed almost three-quarters of under-50s hospitalised by the virus had not been vaccinated.

They also revealed almost two thirds of people in the same age group who died in England with the Indian ‘Delta’ variant had not been jabbed. 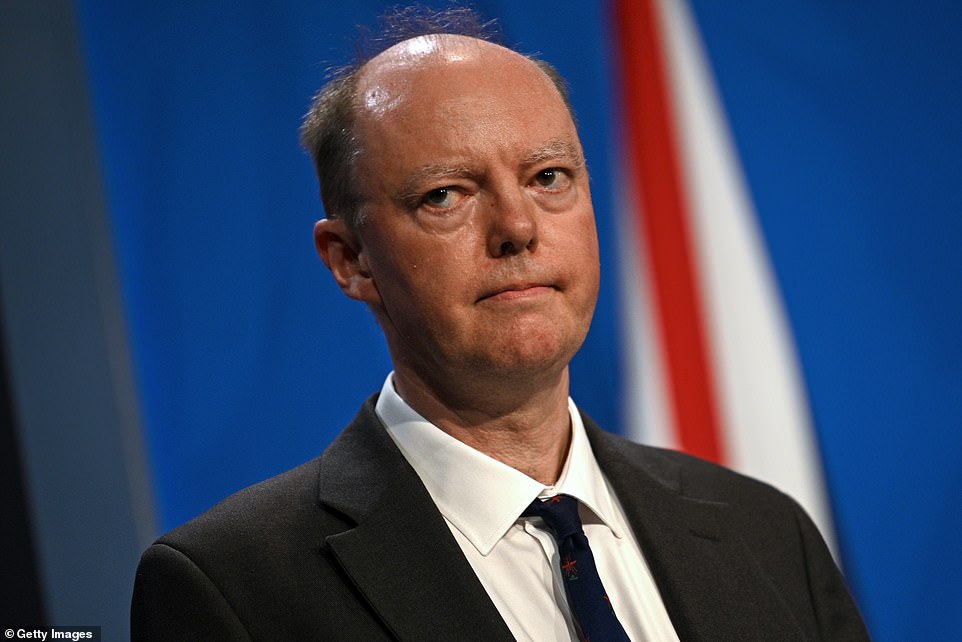 A Covid antibody cocktail drug used to treat former US President Donald Trump has been approved for UK patients.

Britain’s medical regulator gave Ronapreve the green light after finding it could prevent infection and treat patients who were already sick.

Trials showed that among patients with at least one risk factor for severe Covid, it slashed their risk of death or hospitalisation by 70 per cent.

A separate study found it dramatically reduced the risk of catching Covid, but protection only lasts for a month. Health officials will now decide who should get the drug.

The drug is a combination of two cloned antibodies, casirivimab and imdevimab (pictured)

However, at a cost of £2,000 per patient, it is unlikely to be rolled out widely as a preventative. Experts today called for it to be targeted at the most vulnerable Britons.

The approved treatment is the first developed specifically to target Covid, after steroids and anti-inflammatories were repurposed to treat the virus.

Boris Johnson said the drug will be an ‘important weapon in fighting Covid, particularly for those who are immunocompromised’.

Health Secretary Sajid Javid said it would be rolled out on the NHS ‘as soon as possible’.

The treatment is not a substitute for vaccination because the protection against Covid it sparks only lasts for up to four weeks, far less time than that from jabs.

The drug — which uses two different man-made antibodies to fight the virus — is administered by injection or intravenously.  It is made by US biotech firm Regeneron and Swiss company Roche.

Professor Whitty tweeted: ‘The great majority of adults have been vaccinated.

‘Four weeks working on a Covid ward makes stark the reality that the majority of our hospitalised Covid patients are unvaccinated and regret delaying. Some are very sick including young adults.

The UK’s vaccine programme has so far seen around three-quarters of adults in the country double-jabbed.

But nearly three million young adults have not had a first dose, according to figures published earlier this week by the four health agencies.

There has been a concerted effort to get as many people vaccinated as possible, with 16 and 17-year-olds getting letters and text reminders this week inviting them for a jab.

The PHE data, published on Friday, showed there were 1,189 deaths up to August 15 of people who were either confirmed or likely to have had the Delta variant and who died within 28 days of a positive test.

While the majority of deaths with the variant were in people aged 50 or over, the under-50s account for more when it comes to hospital admissions.

Of the 3,173 people aged 50 or over admitted to hospital in England up to the middle of this month who were either confirmed or likely to have had the Delta variant, 989 (31 per cent) were not jabbed.

Coronavirus infection levels remain high across the UK and have risen in Wales and Northern Ireland, according to the latest estimates from the Office for National Statistics (ONS).

They are highest in Northern Ireland, with an estimate of one in 50 people in private households having the virus in the week to August 14 – the highest level since the week to January 23.

The ONS said in England rates of infection have increased for people aged 35 to 49 but have fallen for those in school years seven to 11, for 25 to 34-year-olds and for people aged 70 and over.