Chinese vase kept in attic for more than 20 years by niece after her teacher aunt brought it back from Shanghai sells for nearly £600,000

A woman who kept a Chinese vase in her attic for more than 20 years after her aunt brought it back from Shanghai has sold it for nearly £600,000.

The blue and white porcelain piece had been given to the lucky owner in a box of antiques by an elderly auntie in the 1990s.

The late Annie Glover had herself been gifted it when she worked as a teacher in Shanghai in the early 20th century. She used to keep it on a sideboard in her hallway.

Her niece, who is not being named, had no idea of its worth until after she sent auctioneers an email with a photo of the box of antiques. 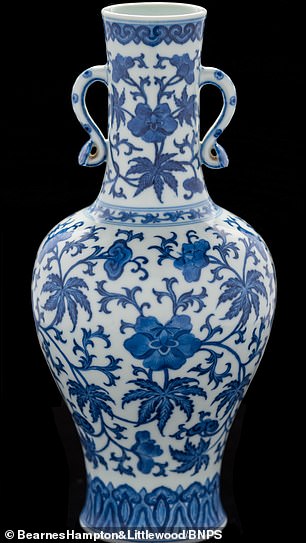 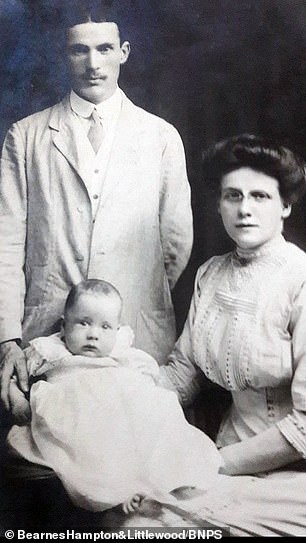 Expert Nic Sainty asked her to bring the 11 inches tall vase in and only then was he able to establish the item was made for the Chinese Emperor Qianlong between 1780 and 1790.

His research also discovered the vessel, which has a chip in one of the handles, was a true one-off piece.

With auction fees added on the total price for the anonymous Chinese collector was £586,000.

The price is a life-changing sum of money for the middle-aged woman, who is from Devon, and she went for a slap up meal with her family after the auction.

The fee was also a record for any item ever sold at the provincial auction house Bearnes, Hampton and Littlewood of Exeter. 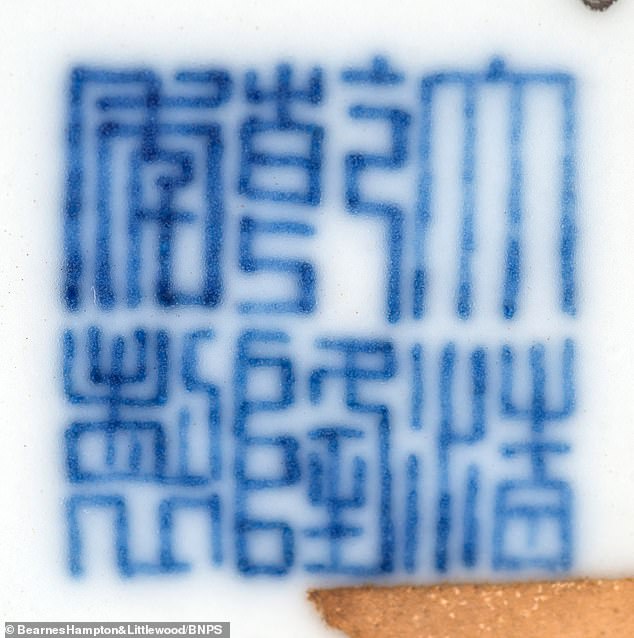 The Qianlong Emperor date stamp. Annie Glover’s niece, who is not being named, has now sold it through Devon auctioneers Bearnes, Hampton and Littlewood

Auctioneer Mr Sainty said: ‘The vase initially came to us via an email enquiry with photos attached.

‘I couldn’t give it a value without seeing it close up.

‘Then three weeks later the lady just dropped in a box of China that had been in her attic for 20 odd years and this vase was among it.

‘Some of the items were quite reasonable and worth a few hundred pounds and there was also some tatty bits.

‘The vase was a very nice quality but when we tried to research it we couldn’t find anything about it which was either a good or bad thing.

‘In the run up to the sale it transpired that one just like it had appeared in multi colours before but not in blue and white this was the first.

‘Then when the right sort of people started expressing an interest in it we thought we have probably got a very good vase here that is going to do very well.’

The sinuous vase has symbolic peony flowers on and was made at the end of the reign of Emperor Qianlong for one of the imperial palaces.

It is not known how and when it left the palace but Mrs Glover bright it back to Britain with her in 1922 after her husband’s untimely death.

Mr Sainty said: ‘The lady who owned it had it in her hall of her house in Bath, just behind her front door.

‘The vendor got it from her auntie and it had just been in the box in her attic for 20 odd years.

‘It was in remarkably good condition save for a small chip on one of the handles.

‘When the vendor realised it had potential she was equally content that it could sell for a relatively small sum or that it might just fly away.

Anything to her was a bonus.

‘She was in the room for the sale and she was very happy. She was with her family and they all went for a slap up lunch afterwards.

‘It is life changing sum for her. She has a daughter who she is going to treat.’