China could have less than ten million births a year by 2026 and see its population decline unless it abolishes two-child-per-family limit, local experts warn

China could see its number of births slide below 10 million annually in the next five years if the government does not quickly abolish its policy of limiting families to two children, an expert was quoted in domestic media as saying.

The number of babies born in China fell by 580,000 to 14.65 million in 2019 and the birth rate of 10.48 per thousand was the lowest since 1949 when present methods of collating data began, according to the National Bureau of Statistics. 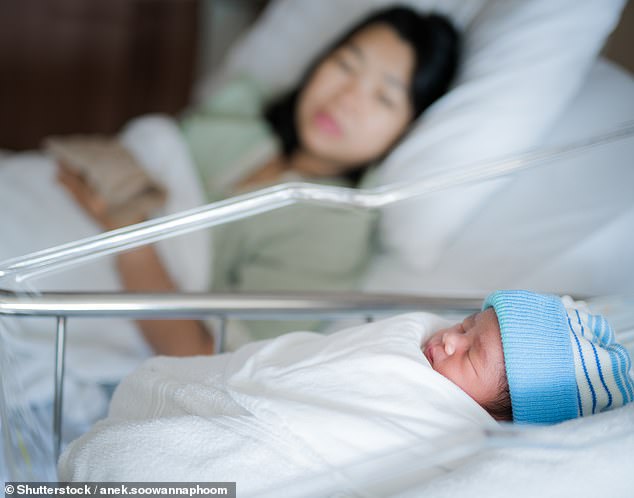 China could see its number of births slide below 10 million annually in the next five years if the government does not quickly abolish its policy of limiting families to two children, an expert was quoted in domestic media as saying (File image)

It has yet to disclose a figure for last year, although it typically releases such data at the end of February.

The country’s falling birth rate and its rapidly greying society is expected to test its ability to pay and care for its elderly.

Although China abolished its decades-long one-child policy in 2016, couples have been discouraged from having larger families by the rising costs of healthcare, education and housing. Economic uncertainties brought on by the COVID-19 pandemic have further weighed on decisions to have children.

Separate data from the Ministry of Public Security shows the number of births last year plunged 15% to 10.035 million births from 11.79 million in 2019.

The ministry may not be counting some children in rural areas, said Liu Kaiming, a labour expert in the southern city of Shenzhen, adding that he expects the number of newborns in 2020 to be between 10 million and 14 million.

“(The number of births) may fall below 10 million next year,” Liu said.

China has also yet to announce the results of a once-a-decade census. It previously said the results would be released in early April.

The publication of the statistics sparked heated discussions on the country’s social media. 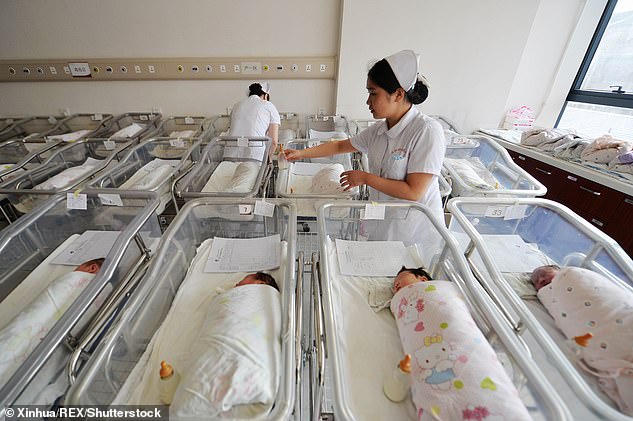 Figures from Chinese authorities showed there were almost 10.04million registered births in the country in 2020. The above picture shows newborn babies being looked after at the Gansu Provincial Maternity and Child-care Hospital in Lanzhou, China, on February 17, 2016

One user on China’s Twitter-like Weibo platform noted the birth figure was ‘lower than the number of people taking the college entrance examination’, adding that ageing would become more serious in decades to come.

Another called the low rate ‘the biggest crisis the Chinese nation is facing’.

China introduced the one-child policy in the late 1970s in a dramatic effort to slow rapid population growth, before reversing it some four decades later.

Beijing revised the rules in 2016 to allow families to have two children as fears grew about China’s fast-ageing population and shrinking workforce.

But the change has not yet resulted in a baby boom, with empowered Chinese women often delaying or avoiding childbirth and young couples blaming rising costs and insufficient policy support for families.

What problems has the one-child policy caused in China? 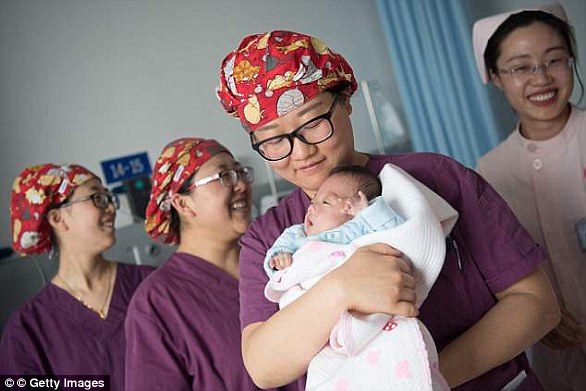 For about 40 years, couples in China were only allowed to have one child (file photo)

The one-child policy, combined with a traditional Chinese preference for having sons, has created a gender imbalance so severe that as of 2015 there were 117 boys born for every 100 girls.

The one-child policy has also left China with a ticking time bomb: a rapidly ageing population.

The ambitious nation has apparently ‘got old before getting rich’, a frustrating factor for the world’s second largest economy.

By 2050, China could face a serious labour shortage as the country’s dependency ratio from retirees could rise as high as 44 per cent by mid 21st century, according to the same Forbes article.

China had 222million people aged 60 years or older as of 2015, according to Xinhua News Agency. The figure accounted for about 17 per cent of the nation’s entire population.