Chilling CCTV footage shows the moment a brave mother and daughter confront a gang of machete-wielding thugs who were about to break into an elderly relative’s house.

The masked trio were caught on camera brandishing a huge blade as they skulked into the pensioner’s back garden while she was inside – after relatives had gone out to walk the dog.

When family members returned they caught the raiders outside the back door putting on gloves as they prepared to storm the property in Northfield, Birmingham. 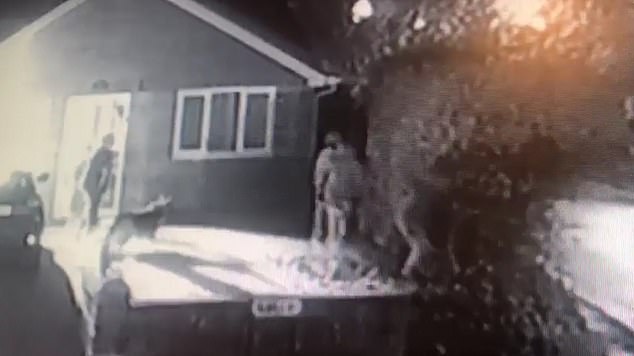 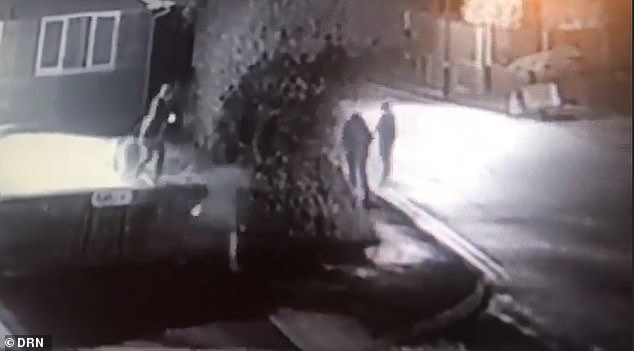 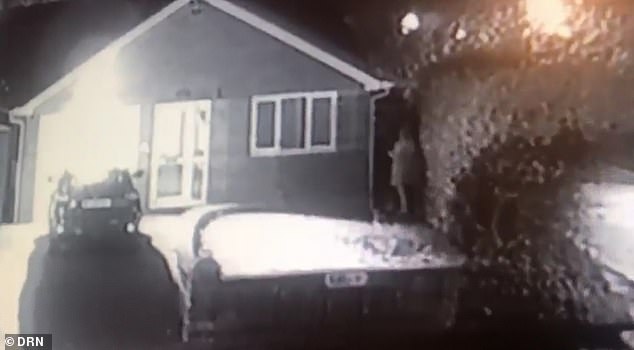 The suspects chased after the women and threatened them with the machete but were seen off by their German shepherd and forced to flee empty-handed in a getaway car.

Police are investigating the incident – which happened shortly before 8pm on Monday – and have appealed for the public’s help to identify the suspects.

Disturbing video captured on a home security camera shows three hooded men climbing a garden wall then creeping into the back garden of the property through an unlocked gate.

Once out of view, the homeowner’s relatives return with the dog and are seen entering the garden where they stumble upon the gang.

Moments later they rush back out onto the front lawn pursued by the men and a stand-off ensues.

The thugs refuse to leave as one appears to threaten the terrified victims with his machete.

But as the German shepherd starts advancing towards them they turn and sprint away.

The older woman is then seen falling over the garden wall as she and her daughter chase after the men before they escape in a car. 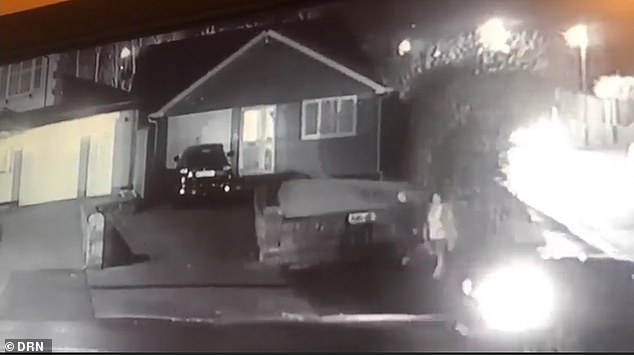 A relative of the victims, who asked to remain anonymous, said: ‘It is my nan’s house and she was inside at the time. My aunt and cousin had gone to take the dog out and when they came back they disturbed the three men in the garden who had made their way in through the back gate.

‘They didn’t get into the property, they were about to make their way in as they were just putting gloves on before they were disturbed.

‘They didn’t steal anything or cause any damage. My aunt told them to leave otherwise she would let the dog off and then they threatened to use the machete if they didn’t back off. ‘We don’t know what they were after or why they would target the house. ‘It’s a horrible thought for it to happen to anyone but when it happens so close to home it’s sickening. It’s not a nice feeling to think anything could have happened but we’re very grateful everyone is safe.’

A West Midlands Police spokesman said: ‘Police are investigating after three men were seen with a machete in Pamela Road in Northfield just before 8pm on Monday. ‘It is believed threats were made to a person who confronted the men before they made off in a car. ‘Anyone with information is asked to contact police quoting crime reference 20BW/5664R/19 via Live Chat at west-midlands.police.uk between 8am to midnight. Call 101 anytime or contact Crimestoppers anonymously on 0800 555 111.’