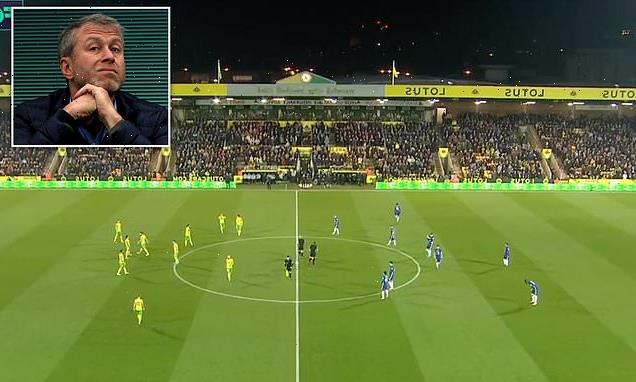 Chelsea fans showed their continued support for their embattled owner Roman Abramovich as they chanted his name before kick-off against Norwich City.

The oligarch today had his assets frozen and sanctions placed upon him by the Government due to his ties to Russian president Vladimir Putin.

The club was granted a special licence to continue playing matches and paying its staff, but they remain under strict conditions that prevent Abramovich from personally profiting from any new revenue.

Despite the lingering uncertainty, defiant Chelsea fans gathered outside Carrow Road in Norwich on Thursday evening to show their love for the Russian tycoon, whose millions helped propel the club to its most successful-ever period.

The visiting supporters loudly chanted his name before breaking out into cries of ‘Chelsea get sanctioned, everywhere we go’, prompting rival fans and pundits to deride them.

Norwich City’s fans responded with tongue in cheek chants of: ‘Chelsea are bankrupt, everywhere they go’ and ‘Where’s your money gone?’

It comes after the oligarch’s name was chanted by Chelsea fans during a minute’s applause for Ukraine at Burney on Saturday, sparking widespread condemnation. 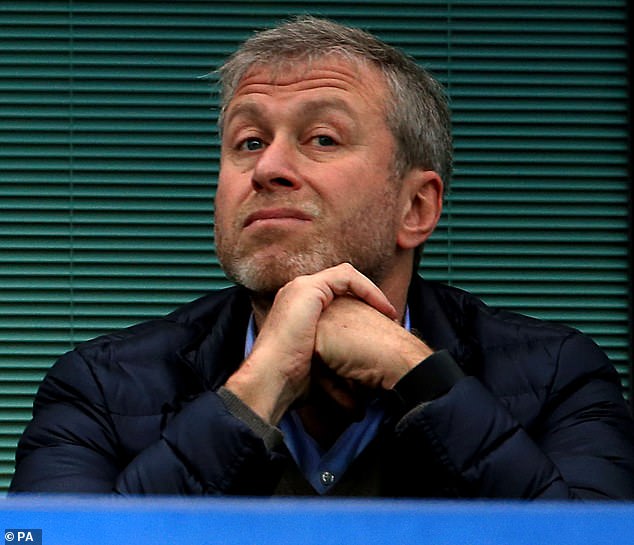 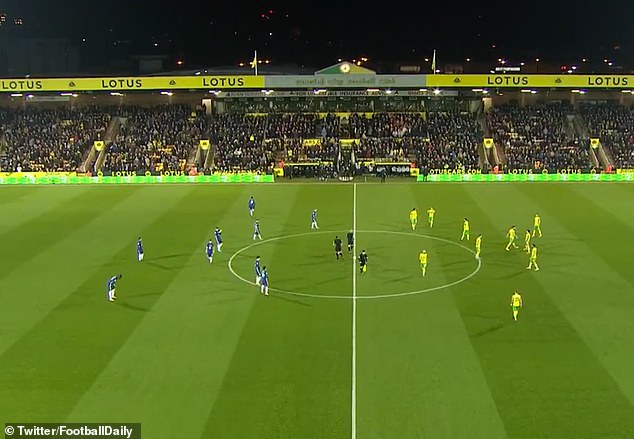 The Chelsea Supporter’s Trust had previously urged all Chelsea fans not to sing the name of owner Roman Abramovich during moments of solidarity with Ukraine.

The club’s travelling fans at Burnley last Saturday ruined a pre-match minute of applause for the people of war-torn Ukraine by chanting the name of the Russian billionaire who has bankrolled their enormous success in recent years.

Abramovich, whose tainted billions propelled Chelsea from mid-table mediocrity to five Premier League titles, was today banned from doing business in the UK – meaning his plan to sell the club is on hold.

The tycoon with an estimated worth of £10billion made his money selling assets purchased from the rubble of the Russian state when the Soviet Union collapsed in the 1990s.

The sanctions – which are part of a broader government package imposed against six other oligarchs – are expected to apply as long as Abramovich owns the club before being lifted in the event of him selling it.

Despite the restrictions placed on both the billionaire and the club, ‘an application for a licence to sell the club would be considered’ by the Government, MailOnline understands.

The Russian tycoon would not be allowed to take any of the money from any prospective deal – with the club understood to be up for sale for around £3billion – and it would instead be determined by Downing Street.

Culture Secretary Nadine Dorries said the aim of today’s measures was to ensure that Abramovich cannot ‘benefit from his ownership’.

Three UK’s decision to suspend its sponsorship deal with Chelsea sets up a possible wave of corporate boycotts that could see the club deprived of tens of millions of pounds worth of revenue and facing financial meltdown.

Car manufacturer Hyundai today said it is ‘currently assessing’ its contract with the West London side, while grocery delivery firm has placed its partnership ‘under review’.

Amid all the off-field issues, Thomas Tuchel’s squad had been putting the finishing touches to their preparations ahead of facing Norwich at Carrow Road on Thursday night.

And speaking to Premier League Productions, Chelsea stalwart Cesar Azpilicueta insisted his team – sat third in the Premier League – are only focused on the match.

‘I have to admit that this has not been a normal day,’ he said. ‘We cannot control this matter.

‘We come here and we’re focused on the game and we know we have to fight for the three points. We have to forget about the stuff that is happening outside.’

The club has been banned from selling home and away tickets, with only fans who have already bought tickets allowed to attend games.

There is also the prospect that Champions League games will be played effectively behind closed doors, as those tickets are often purchased separately from season tickets.

A source told Mailonline: ‘Stamford Bridge is not going to be empty … we don’t expect them to play behind closed doors. It does mean there may be some empty seats but not an empty ground.’