An angry chef who threw his girlfriend to the floor and tried to gouge her eyes after he complained about her cooking in a row over curry has been jailed for 18 months.

Christopher Carr, 27, tipped the meal in the kitchen sink and was asked by his partner to leave last month, heard Durham Crown Court, sitting at Newcastle.

Chris Baker, prosecuting, said Carr refused and his girlfriend used a pan to try and smash a bottle of gin from which he was drinking.

Carr threw her by her hair to the floor, sat on her and tried to gouge her eyes, the court heard. 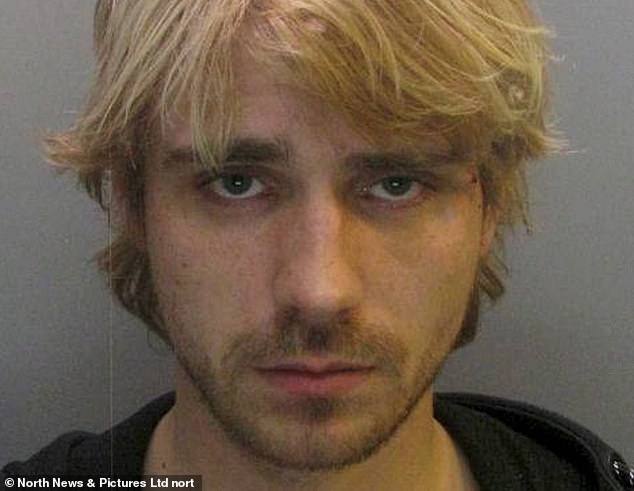 Christopher Carr, 27, from County Durham, was jailed for 18 months after he was put in breach of a four-month suspended sentence imposed late last October

Mr Baker said she managed to flee upstairs and tried to send a message for help while Carr was on the phone to his mother, claiming he had done nothing wrong.

His partner shouted something to the contrary, which caused Carr to grab and hit her, again trying to gouge her eyes, before punching and stamping on her repeatedly while using a small table to strike her on the back.

Due to the noise, neighbours in Evansleigh Road, Consett, came out from their homes, saw what was going on, and rushed in to help the victim.

She was taken to hospital with blackened, swollen eyes and a heavily bruised body.

In a victim statement read to the court, she described being left in fear and terrified at the ordeal during which she thought she would be killed.

She said the defendant had been violent to her in the past, but never as badly as this attack, which took place on March 28. 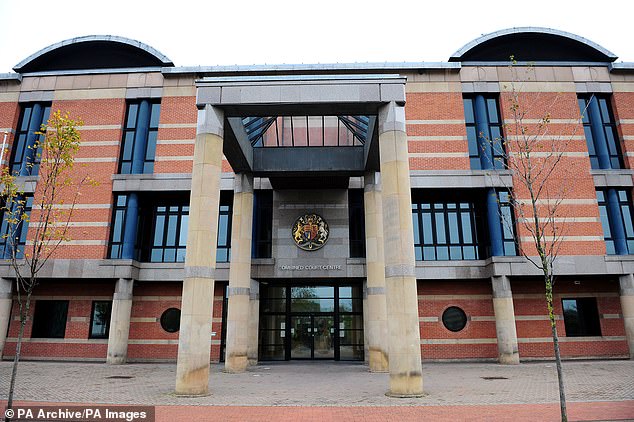 Carr threw his girlfriend to the floor, sat on her and tried to gouge her eyes, heard Durham Crown Court, pictured, sitting at Newcastle (file photo)

Carr confirmed to police there had been a disagreement but initially claimed he acted in self-defence.

He denied inflicting grievous bodily harm after the Crown accepted his guilty plea to assault causing actual bodily harm, which put him in breach of a four-month suspended sentence imposed late last October.

Richard Herrmann, mitigating, said: ‘It was a nasty attack from which she was left battered and bruised, amid an at times, volatile relationship.’

Mr Herrmann said his client works as a chef at a County Durham hotel and this would be his first taste of a custodial sentence.

A condition of his mid-sentence licence release bans further contact with the victim.