Washington: An anonymous cyberbully in Pennsylvania seemed to have one goal in mind: Force a trio of cheerleaders off their formidable local team, the Victory Vipers.

Doctored images were sent to the coach of the competitive squad that appeared to show the teen girls in humiliating or compromising situations that could get them kicked off the team, like appearing nude, drinking alcohol and using drugs, according to the criminal complaint.

In anonymous texts and calls, the bully told one girl, “you should kill yourself”.

When police unmasked the alleged culprit late last year, they found the bully hiding within the Victory Viper circle.

Raffaela Spone, a local cheer mom whose daughter is on the team, was charged last week with three misdemeanor counts of cyber harassment of a child and related offenses, according to the Bucks County District Attorney. 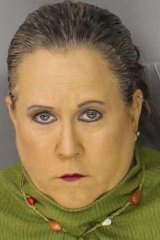 Raffaela Spone, 50, of Pennsylvania, USA, has been charged for allegedly creating “deepfake” images of her cheerleader daughter’s rivals in a bid to have them kicked off the team. Credit:Hilltown Township Police Department

For more than two months last year, Spone allegedly used at least four phone numbers and various apps and online tools to manipulate images and mask her activity to carry out her cyberbullying attacks, according to the criminal complaint.

The bizarre saga of cyber harassment is notable for the use of “deepfake” technology and for what Bucks County District Attorney Matthew Weintraub called the “unlevel playing field”.

“This is one of the first instances where we’ve seen it used where an adult is targeting a juvenile,” Weintraub said. He said cases of using internet-based technology to make threats – bomb threats and altered photos masked by the dark web – are rising, but that they have largely stayed on what he called a “juvenile-to juvenile plane”.

If convicted, Spone could face from six months to a year in prison, though Weintraub said the maximum penalty for low-level misdemeanours is unlikely. While creating or sending images of minors naked or involved in real or simulated sexual situations normally yields stronger charges, Weintraub said the description of the images as “nudes” is somewhat imprecise: In the videos, the victim’s bikini is digitally removed and overlaid with skin-toned bars creating what Weintraub described as Barbie doll-like effect.

“It would seem the intent was to make it appear nude, but with no obvious genitalia,” he explained, bluntly calling the videos an effort to “slut-shame” the victim. Otherwise, he said, Spone would have been charged “with a much more serious felony offence.”

University of Virginia law professor Danielle Citron, who researches digital harassment, privacy and free speech, noted that deepfake sex videos are increasingly common, overwhelmingly target women and, most troublingly, are getting easier to make and harder to spot.

“It’s like an arms race; pretty soon, the ‘dark hats’ are ahead of the ‘white hats’ and we can’t tell which is real,” said Citron, using hacker community terms to describe security experts who use their expertise for ethical versus illegal activity.

Citron, who wrote the 2014 book “Hate Crimes in Cyberspace” and has testified before Congress about the threats posed by deepfakes, said the barrier to entry for creating the malicious videos continues to drop as phone-based apps and YouTube tutorials make them easier to use. “It’s gotten very user-friendly.”

Prosecutors said Spone used some of the very tools Citron described to create the “deepfake” videos. She allegedly scraped photos from the victims’ social media profiles and doctored the images to suggest nudity, drinking alcohol or vaping before sending them to the cheer team coach. Spone allegedly began to harass her first target in July, creating a nude video of the girl and sending her messages urging her to kill herself.

In August, the parents of two other girls on the team told Hilltown Township police investigators their daughters were being targeted with similar harassment.

After investigators subpoenaed information on the IP address where the threats were originating, the said, they were led to Spone’s address in Chalfont, Pennsylvania, roughly an hour north of Philadelphia.

Attempts to reach Spone for comment were unsuccessful, and it is unclear if she has an attorney. Her next court date is March 30.

In a statement, the co-owners and coaches of the Doylestown, Pennsylvania-based cheer team expressed sympathy for the families involved and said the behaviour alleged in Spone’s criminal charges is contrary to their group’s policies.

“When this incident came to our attention last year we immediately initiated our own internal investigation and took the appropriate action at the time,” Mark McTague and Kelly Cramer, who co-own the Victory Vipers gym, said via email. They said they immediately co-operated with police and noted that “All athletes involved are no longer [a part] of our program.”

The details on what precisely motivated the alleged harassment are still murky. The Philadelphia Inquirer, which first reported the story, spoke to a father of one of the victims who said his daughter and Spone’s were initially friends; he believes the harassment started after his wife discouraged their child from hanging out with Spone’s daughter.

Citron, the professor, said the criminal justice system still lags behind deepfake technology when it comes to investigations and prosecutions. She and Weintraub each said deepfakes and similar technology pose a broader threat to the truth by muddying the information ecosystem.

“It’s disturbing to me because we rely on being able to authenticate evidence as a foundation of the criminal justice system,” Weintraub said. “If everyday people are capable of using deepfakes, that’s going to make doing our job a lot more difficult.”