The Country Fire Authority has been accused of failing to properly address serious accusations of bullying, discrimination and sexual assault within the organisation.

The Age can reveal claims that a female CFA employee was the victim of serious sexual assaults on two occasions in 2003 and 2013 by different colleagues, which was relayed to the then CFA chief executive in 2018. 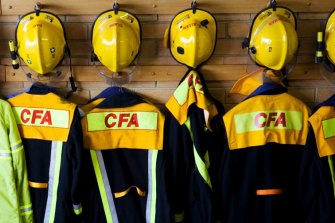 The CFA faces allegations that it is unwilling or unable to deal with systemic bullying, discrimination and harassment.Credit:Jessica Shapiro

The woman, who has spent two decades at the organisation, said there was little follow-up or support until she joined a group of women to make a formal complaint about inappropriate workplace behaviour.

At the end of last year, the CFA acknowledged in correspondence with the woman they could have done more to support her and that leaders lacked the training to properly respond to an employee’s disclosure of sexual harassment or assault.

However, the woman said she had seen little improvement within the CFA since the investigation, despite promises that progress was being made.

“This is all I have known in the CFA,” she said. “They don’t want to know that something’s happened, so you’re better off just not saying anything.”

The alleged victim said she wanted to speak out so that future employees who are victims of sexual assault are able to receive better support. She has now, with the support of those close to her, made a statement to police about the 2003 alleged sexual assault. Both the alleged perpetrators have now left the CFA.

The woman had previously provided a statement to the Victorian Equal Opportunity and Human Rights Commission in 2016, but her claims were never made public after the United Firefighters Union won a court battle in 2018 to have the findings of the investigation suppressed.

The VEOHRC report was commissioned in 2015 by then emergency services minister Jane Garrett in response to a damning internal review revealed that 50 per cent of respondents reported being bullied, while one-third had been harassed.

More than five years on, many alleged victims remain unheard and disenchanted, amid claims the CFA had bowed to pressure from the powerful United Firefighters Union and allowed the problems to fester.

The Age has spoken with several employees, who have asked not to be named because they fear retribution from CFA management.

They have provided dozens of emails and internal CFA documents that support their claims of a quasi-military management structure that refuses to tolerate any dissent and routinely ignores misconduct.

The allegations come amid a wave of anger and concern about sexual harassment within institutions and workplaces, including allegations of sexual assault levelled against men in positions of power.

A CFA spokeswoman did not respond to specific questions from The Age, but issued a general statement saying the organisation was extremely concerned by the allegations raised.

“There is no place for bullying or harassment in the CFA and we won’t back away from taking action to stamp this out,” the statement said.

“There has been considerable reform in our HR and investigation processes over the past six months, supported by external advice and we will continue to review our work in this area,” the spokeswoman said.

She said the CFA was currently undertaking a number of investigations in relation to complaints raised and were continuing to provide support to staff or volunteers who wish to raise a complaint.

Another woman who was employed by the CFA for almost 20 years told The Age that a group of victims were now considering legal action over the organisation’s repeated failure to protect its employees and properly investigate complaints.

She and about seven other colleagues had first raised their concerns at a meeting in December 2018 that was attended by then chief executive Paul Smith and others.

Mr Smith, who did not respond to requests for comment, had been appointed to overhaul the CFA’s dysfunctional culture.

But within months of commencing in the role in February 2018, Mr Smith was undermined by some members of the CFA board and executive, according to three senior CFA sources not authorised to comment publicly and fearful of recrimination.

Mr Smith resigned a little over a year into his tenure and five months after the meeting – one of seven chief executives to depart from the CFA in the past six years.

The serious health and safety issues raised at the meeting have never been properly dealt with, according to the complainants, but instead flicked between departments, outsourced to independent investigators or “kicked down the road”.

“There has been no real investigation that I could see. I was constantly ringing at the time the [CFA’s] integrity department, which was the first complaint, to say where are we at, what’s going on? And I wouldn’t be spoken to like I was an inconvenience and a piece of dirt. It was always us ringing them … we never got anything in writing about what processes they were really following,” a female employee said.

She said women were repeatedly overlooked for promotion, or excluded from interviews because they had not ingratiated themselves themselves with management.

Another woman, who had been employed by the CFA for about five years, also raised concerns at the meeting over her mistreatment by a female manager.

She claims to have been further ostracised after taking her grievance to the union in July 2018, which was immediately relayed back to her boss and at least six other CFA managers.

On WorkCover for more than two years, she said CFA’s integrity department and support staff had barely made contact.

“I have no idea where my investigation is at. It’s been an ongoing nightmare that has left me in some very dark places at times,” she said.

Complaints raised in the 2018 meeting – including the serious sexual assault allegations – were eventually referred to an external company to investigate. The company said it “interviewed witnesses and reviewed relevant documentation” between March and June 2020.

However a report by the external investigator was never released and the complainants were not told what disciplinary action, if any, was taken.

“CFA is unable to reveal details regarding the investigation report given its highly sensitive and legally privileged nature,” according to a letter from acting CFA chief executive Catherine Greaves on October 20 last year.

“While CFA is not in a position to share with you all the actions that have been taken in response to this matter, you can be assured that the learnings have been taken seriously and are focused on the moving forward and establishing an environment that is safe, respectful and inclusive,” Ms Greaves stated in the letter.

Ms Greaves then warned the complainants could face disciplinary action if they were to leak the contents of her letter.

The woman who was allegedly sexually assaulted on two occasions a decade apart said the letter she received following the completion of the external investigation felt like the CFA “was just checking a box”.

She described the culture at the CFA as toxic. “That’s the only word for it, a toxic wasteland,” she said. She is now on Workcover, and prior to that was on sick leave.

“I’ve likened it to a domestic violence relationship. The reason you stay [at the CFA], for me it was about serving the community and the frontline workers. And you have some really good experiences, really good interactions with your members. That’s what makes you stay. But then you have some really shitty experiences and you can’t escape. You don’t feel you can leave,” she said.

In 2015, the Victorian Equal Opportunity and Human Rights Commission was asked by the state government to investigate the workplace culture of the CFA after reports of systemic bullying and sexual discrimination.

The findings were due to be released in 2017, however the United Firefighters Union successfully challenged the public release of the document in court and the report has since been suppressed.

At the time, the Human Rights Commission expressed dismay at the court’s decision, with commissioner Kristen Hilton saying she was disappointed.

“Thousands of people participated in the process and it is a real blow that these stories will not be heard,” she said.

In 2018, UFU boss Peter Marshall released a separate report that the union commissioned into workplace culture at the fire services which found firefighters do not tolerate “discriminatory or improper behaviour”.

Mr Marshall said the UFU no longer had coverage of the CFA. He urged anyone alleging to have been sexually assaulted to report the matter to police.

A spokesman from VEOHRC said they were unable to comment but encouraged anyone who had experienced sexual harassment to make a complaint to the commission.

“We’ve established a Ministerial Taskforce on Workplace Sexual Harassment to develop reforms that will prevent and better respond to sexual harassment in workplaces,” he said.