Hair-raising! Celebrity spoof queen Alison Jackson loses her £15,000 Trump wig that took 15 hair stylists months to make after leaving it in a black cab ahead of her West End show

Alison Jackson, the Bafta-winning filmmaker famous for presenting unnervingly realistic doubles of celebrities, has a problem.

The bespoke Donald Trump wig, which cost £15,000 and took 15 hair stylists six months to create, has gone missing ahead of her London stage show, Double Fake, in which it was due to play a starring role.

Jackson left the wig, which was in a black bin-liner, in a black cab taking her from South Kensington to rehearsals in Leicester Square.

‘I can’t simply buy a replacement Trump wig from a costume shop,’ says Jackson, who has reported the loss to the Taxi Lost Property Office. ‘Without it I have half a show, which means I have no show at all. If anyone has any information, please get in touch.’ 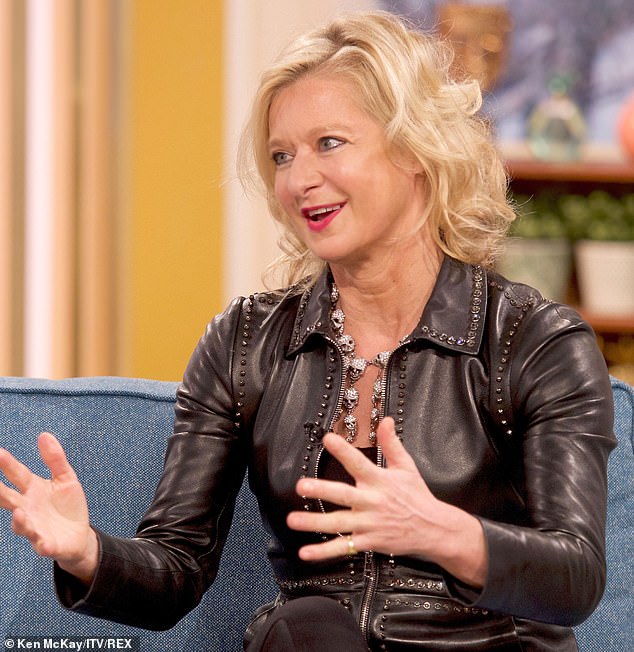 Alison Jackson (pictured on ITV’s This Morning) left her £15,000 Donald Trump wig in the back of a black cab

Members of the public who believe they have stumbled upon President Trump’s mane are advised to handle the object with extreme caution.

Jackson, 58, will be performing her show at the Leicester Square Theatre next week.

She has a long track record of mocking the rich and famous with faked pictures of them in comical set-ups, but her Trump double is one of her proudest achievements.

‘My most successful lookalike is Donald Trump, who I photographed in a fake Oval Office surrounded by beauty contestants,’ she says.

‘When I took him to Trump Tower in the run-up to the 2016 presidential election, we were flash-mobbed. I’m hoping to make a documentary about Trump, but it’s difficult to make a film about a serving president in America.

‘No broadcaster wants to be shut down. I’ll probably have to make it independently.’ 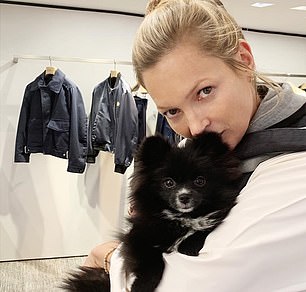 Has slender Kate Moss ever been this close to a Cookie? The supermodel, 45, appeared to be in her element this week when she embraced a pal’s dog named after a biscuit.

The black Pomeranian is owned by British fashion designer Kim Jones, artistic director of Dior Homme, who invited Kate and her boyfriend, Nikolai von Bismarck, into his Parisian store.

Kate is no stranger to canine companions and two years ago acquired a Papillon pooch.

‘I’m having to rethink everything,’ she said. ‘You can’t walk a dog in a heel. You look ridiculous.’

Bleak House director Susanna White was reminded of the challenges of working with animals filming the drama Woman Walks Ahead about Native American chief Sitting Bull. His horse, Rico, was trained to dance when he heard a gunshot.

However the nag recruited to play Rico hadn’t read the script. White tells me: ‘When he heard a gunshot he kicked up his heels and bolted over the horizon.’

TV comedian Dom Joly says he is still banned from Weston-super-Mare in Somerset after dubbbing it Weston-not-so-super-Mare.

‘I am still, I think, officially banned after I wrote about the curious people who approached me when I was filming in the town. To say these people were odd was an understatement, but the town took my humorous writing to heart.

The mayor burned an effigy of me, and I think there was even a slug race where all the slugs were named after me.’

TV art sleuth Philip Mould reveals he was close to being expelled from Russia for his ‘sinister’ behaviour inside a St Petersburg museum. ‘I was nearly thrown out because I was taking photos in the Hermitage.

They thought I was doing something sinister. I wasn’t, but they didn’t know that,’ the Fake Or Fortune? host tells me at Susannah Fiennes’s Reaching Out private view at the Redfern Gallery in Mayfair.

‘Taking photographs in museums is always a point of contention. Even if I’m not allowed to, I can’t resist.

‘I do it a lot in London and it’s always a high-wire act: you never quite know, if you hold up a camera, what the reaction will be.’

Oscar nominee Richard E. Grant has been basking in the acclaim for his performance in Can You Ever Forgive Me?, but he’s unlikely to win awards for his political punditry.

In an interview with the Hollywood Reporter, Grant curiously ascribes the fall of Margaret Thatcher to the Gulf War, rather than Europe or the poll tax.

Recalling his move to London from Swaziland in 1982, the Withnail And I star says: ‘I got there just as the then-Prime Minister Margaret Thatcher was sending troops to the South Atlantic to fight Argentina about the Falkland Islands.

‘But it was part of this Churchillian jingoism that she pursued in order to try and save her political skin and when she tried the same tactics eight years later for the Iraq War, people went: ‘Eh eh. We’re not having that all over again. You’re out.’ ‘

Clearly there was a limit to the research Grant undertook when playing Michael Heseltine in the Thatcher biopic The Iron Lady.

Film star Jude Law has finally found a keeper. His girlfriend of four years, psychologist Phillipa Coan, confirmed their engagement this week when she went out in London with a diamond ring on her left hand and sporting a £1,450 Saint Laurent jacket.

In contrast to his previous high-profile romances, Jude, 46, whose exes include Sienna Miller and Lily Cole, says of his current, more private relationship: ‘It takes a lot of effort. 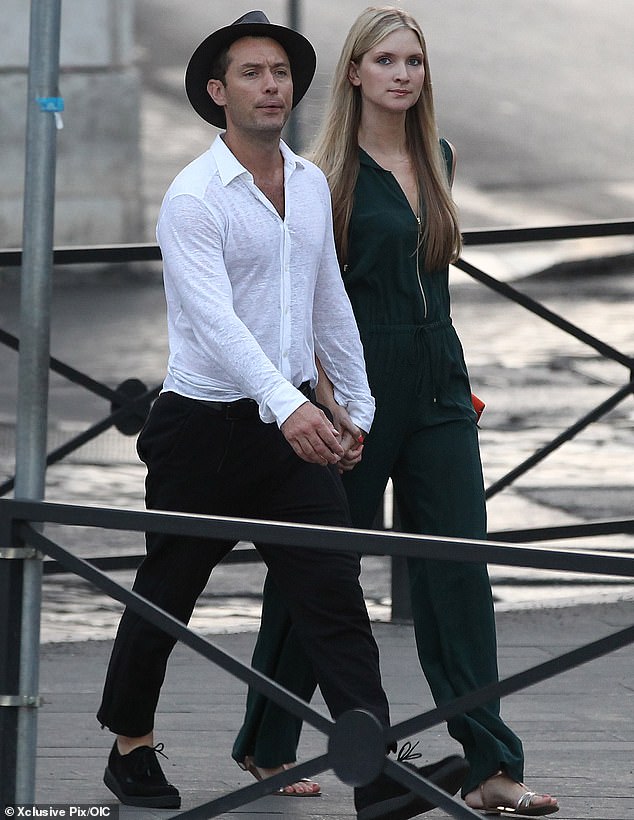 Jude Law with his girlfriend Philippa Coan on vacation in Rome. They embraced and walked hand in hand as the sun set 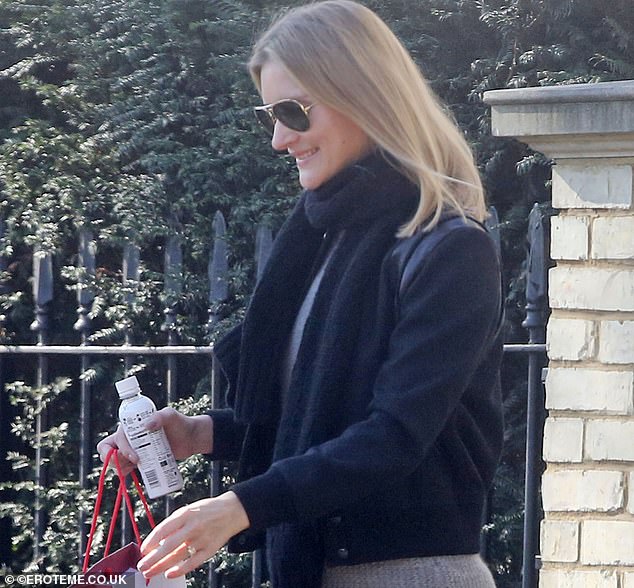 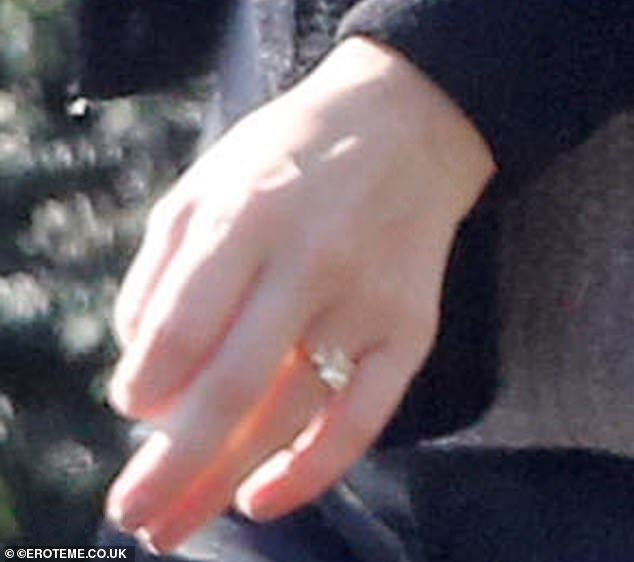 Well no, nothing about our relationship is an effort, but it takes a lot of effort to keep it that way. Neither she nor I have any desire to make it public property.’

Jude is reportedly marrying Phillipa, 32, in France this spring.

He has three children from his previous marriage to Sadie Frost, as well as daughters by Samantha Burke and Catherine Harding.

The company used by the former stockbroker to channel his earnings, Thorn in the Side Ltd, reports that it had £421,000 in capital and reserves for the year ending last May.

Double Oscar-winner Cate Blanchett is considering retirement as she approaches 50. 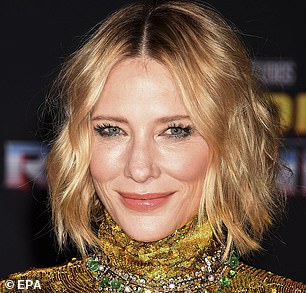 Cate Blanchett (pictured at the Thor: Ragnarok premiere) may retire from acting

‘As you get older, acting just gets more and more humiliating. When I was younger, I would wonder why the older actors I admired kept talking about quitting,’ says Cate, who lives in East Sussex with her playwright husband, fellow Aussie Andrew Upton, and their four children.

‘Now I realise it’s because they want to maintain a connection to the last shreds of their sanity. As I get older, I ask myself if I still want to submit myself to the shamanistic end of this profession and go completely into madness.’ Cripes!

Oh the shame. Lord Pickles, Tory MP for Brentwood and Ongar from 1992 to 2017, ex-minister and former Conservative Party chairman, was doing a pre-recorded interview with TV station London Live yesterday.

His face was a picture when a reporter from the station, Tanya Francis, asked him: ‘Have you done any TV interviews before?’