London: Emmanuel Macron’s bid to be the first French president to win a second term in 20 years has now taken on far greater significance. The future of Europe could also be at stake.

The 44-year-old, who upstaged and surprised France five years ago as dynamic, fresh-faced outsider is no longer that man. He is the establishment. Despite appearing in official photos in a Zelensky-style hoodie, Macron is incumbent president who voters identify as an arrogant, Parisian elite is now the poster boy for the well-off in French society.

For a bitterly divided nation, he is someone to be blamed for their woes. 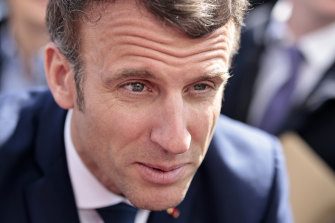 French President and centrist candidate for reelection Emmanuel Macron talks to residents as he campaigns in the village of Spezet, Brittany.Credit:AP

And so just like in 2017 he will face Marine Le Pen, a right-wing nationalist who has shifted her politics somewhat to appeal to not only the conservative, anti-immigrant mood, but younger voters in regional towns, blue-collar workers and young families struggling to pay their bills. In an intimate television interview recently she spoke openly about the six cats who share her life and revealed she had become a registered breeder.

With Macron seemingly taking the voting public for granted, she zeroed in on rural France and made domestic politics her focus. Instead of calling for the end of the euro, she promised to cut fuel taxes and introduce caps to curbs the rapidly increasing cost of living.

She married left-wing economics with law-and-order nationalism to undermine Macron’s early lead in the polls, promising income tax exemption for the under-30s and low-interest loans of up to €100,000 (AU$146,000) for couples starting a family while also vowing to ban headscarves in public. 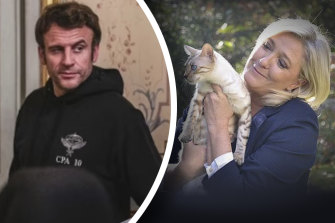 No longer an outsider, Emmanuel Macron in a hoodie will face Marine Le Pen in the second round of voting.Credit:The Age

While she will be an outsider in the second round of voting on April 24, a Le Pen victory would have serious repercussions far beyond France. Her rhetoric has changed but her core beliefs have not.

It would be regarded as a shattering blow to liberal democracy in the Western world and plunge Europe Union into turmoil just when the United States and its allies were uniting against Vladimir Putin’s bloody and murderous invasion of Ukraine.

Le Pen and Putin have previously been perceived as cosy. Macron has leaped on it in recent days and she has been forced to denounce his actions.

The past six weeks have moved the dial on Europe’s foreign policy. Le Pen, a long-time sceptic of the EU, has said she would withdraw from NATO’s military command at a time when Russian forces are waging war on European soil in Ukraine.

She told supporters on Monday morning Australia time that the final vote in two weeks would be to decide the fate of “society and even of civilisation” and, if she won, she’d restore France’s “prosperity and grandeur”. She said she planned to be president of “all the French”.

Le Pen urged “all those who did not vote for Emmanuel Macron” to back her in the second round.

And while it might still seem an unlikely scenario, a month ago, Macron appeared likely to take about 57 to 61 per cent of the second round vote, and Le Pen 40 to 43 per cent.

Now three polls estimated Macron’s vote at 50 to 51.5 per cent and Le Pen’s vote at 48.5 to 49 per cent. Allowing for a margin of error, Le Pen may be within striking distance of an upset victory.

Macron was reported to have expressed relief when told of the exit polls in the Élysée Palace with his wife Brigitte, 68, and a handful of close advisers. He drew fierce criticism for dodging a television debate with other candidates and barely bothered to campaign in the past six weeks. Instead, focussed on playing peacemaker with Putin. 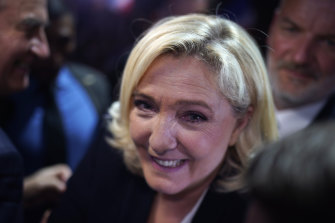 When public polling rapidly softened for Macron in the past weeks panic set in. Some of Macron’s advisers had feared that voters would turn on him. In the end he bettered his first round vote from the 2017 election. But there seems little doubt the run-off threatens to be tighter than five years ago, when Macron crushed Le Pen, 66 per cent to 34 per cent.

“Nothing can be taken for granted,” he told supporters who cheered and waved French and European flags.

“The debate that we will have in the next 15 days will be decisive for France and for Europe.“

He denounced Le Pen as a member of the “extreme right”, saying she would leave France with only populist-led countries for allies. He also accused her of wanting to prevent “Jews and Muslims from eating the way their religions stipulate”.

But Macron has clearly been shaken. He cannot afford to take his people for granted. Opinion polls show that cost of living is trumping national security right now. That is a lesson for government’s facing re-election across the world, in particular in Australia.

Macron still holds on to a reformist agenda that includes raising the retirement age from 62 to 65. An economically sensible idea but at a time of discontent it may be an Achilles heel. Le Pen wants the retirement age at 60 for those who left school early and put in 40 years of hard labour.

But he has promised to “do everything” to convince voters that he has the solution to high prices.

Six months before winning France’s 2017 presidential election, Macron wrote in his book In Révolution, that if the French people did not pull themselves together, the far right would be in power in five or 10 years’ time.

And now, its only him standing in the way of making that a reality.