Weekly cabinet meeting usually takes place in Madrid but government decided to hold it in Barcelona on Friday. 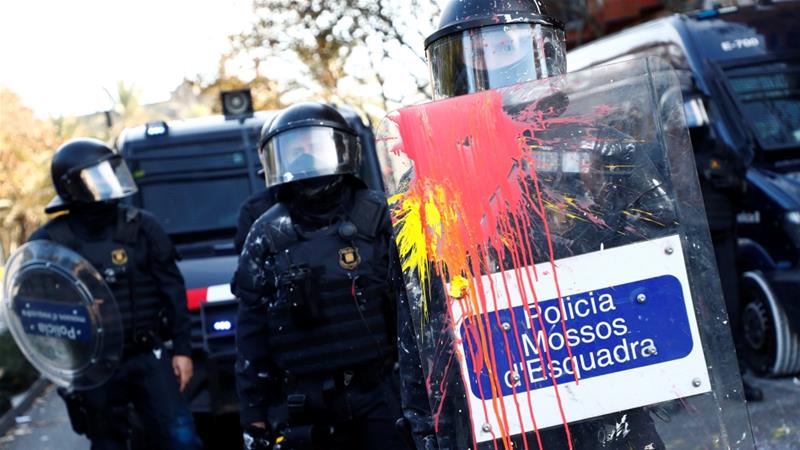 Protesters have blocked a major highway and dozens of roads leading to and from the Spanish city of Barcelona, as anger grows over a planned cabinet meeting in the want-away region.

Led by a coalition of pro-secession parties, thousands of protesters rallied on Friday to show their disgust at Spanish Prime Minister Pedro Sanchez’s decision to hold his weekly meeting in Barcelona, which failed in its bid for secession last year.

Cabinet meetings usually take place in Madrid, but Sanchez has vowed to take them to other cities as a sign of his commitment to decentralisation.

Images circulating on social media showed hundreds of protesters blocking roads and a motorway in the city, while in other videos, demonstrators could be seen throwing bottles and flares at police.

The venue of the meeting, a 14th-century Gothic palace in downtown Barcelona, was shielded by security cordons and fences, and hundreds of anti-riot police have been deployed to keep protesters away.

A picture posted on Twitter by the grassroots Committees for the Defence of the Republic showed a burning picture of King Felipe, accompanied by the caption: “On 21 December, we’ll be ungovernable”.

On Thursday, Prime Minister Sanchez and Catalonia’s president, Quim Torra, issued a joint statement, calling for dialogue to settle the conflict over the future of the northeastern region.

“Despite the notable differences about its origin, nature and ways of resolution,” the statement said, both governments “share the commitment for effective dialogue that is linked to a political proposal that has the backing of a large part of Catalan society.”

Sanchez has been harshly criticised by the right-wing opposition for his meeting with Torra, but has presented the visit as “a way of showing affection to Catalonia”.

But many separatists see it as a provocation, coming a year after a snap regional election called as a way out of last year’s independence attempt.

“Sanchez has spun this as a charm offensive, a reaching out to Catalan society,” said Al Jazeera’s Sonia Gallego, reporting from Barcelona.

“But that’s not the way it is being perceived by pro-independence politicians and activists. They see it as a very provocative sign, a symbol that the Spanish government is intent on doubling down on the region and preventing it from trying to exist in its own right.

“If you look at the date, it’s a year on from the anniversary from the date the Catalan elections were called and the government imposed direct rule from Madrid,” she said.

“Right now, a whole stretch of downtown Barcelona has been blocked off. It’s caused a lot of commotion, affecting businesses, schools, and forcing many people not to turn up for work.

“Many of the protesters are interpreting the meeting as a way to try and provoke chaos in the city.”

Historical disputes and financial grievances have strengthened the cause of independence, yet its 7.5 million people appear to be deeply divided over the issue.