Camilla’s fad diets warning: Duchess tells young women to avoid dairy free diets that leave them with the risk of brittle bones as she takes on ‘skinny lizzies’ of social media

The Duchess of Cornwall yesterday warned the Instagram generation against ‘ridiculous’ diets.

Highlighting the celebrity-inspired fad for dairy-free and ‘clean eating’ regimes, she said youths were risking the health of their bones.

She voiced her fears in an interview with the Daily Mail in which she told of her family’s struggles with osteoporosis, a disease that killed her mother and grandmother.

Health experts fear that social media sites such as Instagram are fuelling an obsession with self-image that encourages users to resort to extreme diets. 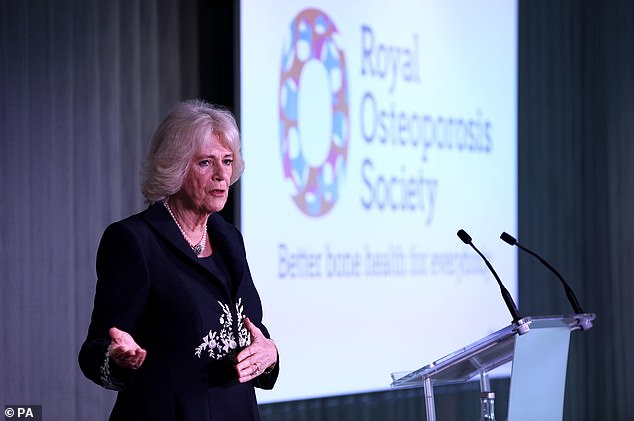 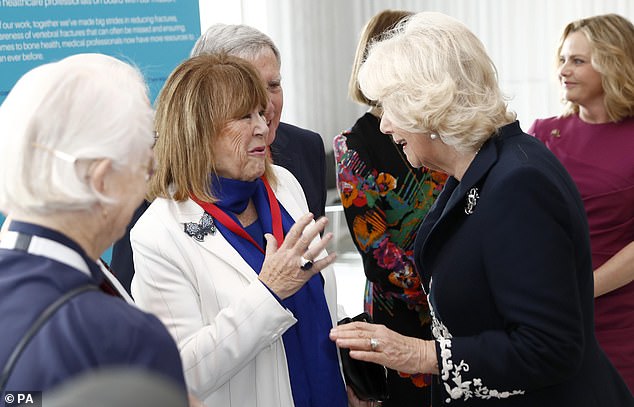 Pointing out the importance of calcium, Camilla said: ‘It is this ridiculous dieting, cutting out dairy and all the things that are good for your bones. These girls see “Skinny Lizzies” in a magazine and they all want to be thin. It’s about social media, too.

‘We need to find a way of educating children that they need to take care of their bodies now instead of aspiring to look like someone they see in a picture if they want to protect themselves in old age.’

The duchess did not single out any social media firms in her remarks at a reception in London for the Royal Osteoporosis Society. But Instagram was condemned by mental health charities last year for failing to block hashtags that promoted eating disorders.

The photo-sharing site, which is owned by Facebook, has been under increasing pressure to police content amid concerns that its hugely influential ‘stylised’ images promote unhealthy and dangerous attitudes toward weight.

Ministers have started drafting proposals for new laws to regulate social media. And yesterday Theresa May said the firms should be doing ‘more to ensure that they are not promoting harmful content to vulnerable people’ – particularly those with eating disorders.

Camilla told how she had to watch her mother, the Honourable Rosalind Shand, die in agony in 1994 at the same age she is now – 71. Her maternal grandmother, Sonia Keppel, died as a result of the debilitating condition eight years earlier.

Osteoporosis is often described as the ‘silent epidemic’ because many sufferers do not realise they have brittle bones until they suffer their first fracture.

The Royal Osteoporosis Society says 3.3million patients over the age of 50 have been diagnosed with the disease – and the toll of sufferers in their teens, twenties and thirties has been increasing.

Half of all women and one in five men will at some point in their lives suffer a facture because of poor bone health. Each year the NHS has to deal with 500,000 broken bones caused by osteoporosis – around one every minute.

Camilla said: ‘Part of the problem now is the wartime generation who didn’t have, because of rationing, milk and butter so in their teenage years they deprived their bodies of calcium. But that wasn’t by choice. Teenagers have the choice now and still seem to be depriving their bodies.

‘It’s the fad diets, they are the worst thing to do. You are depriving your bones of calcium. They always say you are what you eat.’ 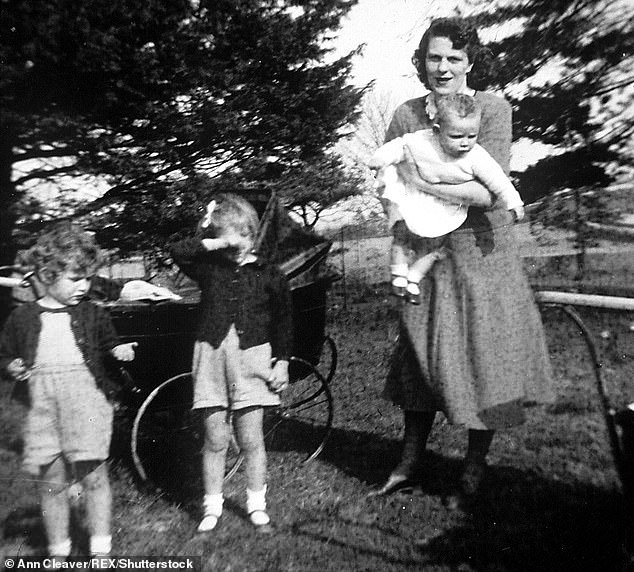 Camilla told how she had to watch her mother, the Honourable Rosalind Shand, die in agony in 1994 at the same age she is now – 71. Pictured left to right are Camilla, brother Mark, sister Annabel and her mother Rosalind 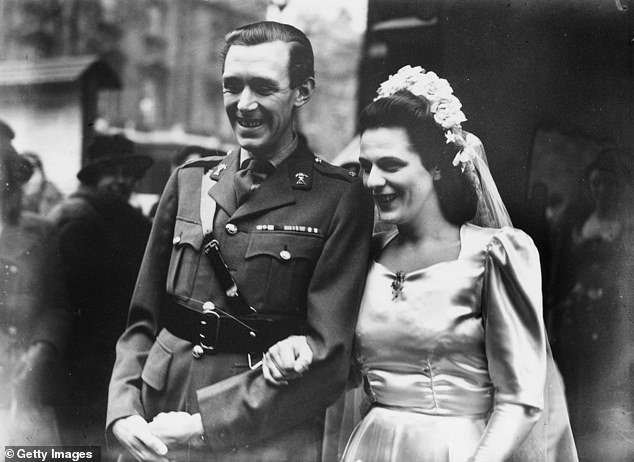 Camilla revealed that her children Tom and Laura are acutely aware of the risks. ‘They were horrified by seeing my mother (Rosalind is pictured with husband Major Bruce Shand) getting smaller and smaller,’ she said

The risk of osteoporosis, which causes bones to lose their strength and break more easily, can be drastically reduced by maintaining a healthy body weight, eating plenty of calcium-rich foods, taking regular load-bearing exercise, upping vitamin D levels through sunshine and not smoking.

With bones at their strongest by the age of 30, it is crucial to build up a healthy ‘bone bank’ early on.

‘There’s got to be some cool way of getting the message across to children through social media without making it seem fuddy duddy or old,’ the duchess said.

‘If parents and grandparents are educated to tell their children it will make a difference. Children don’t want to know at that age that they will be old one day and that their bones are going to crumble.

‘You have got to find a way of getting to them and making them exercise. A lot of children love exercise but it comes to a stage when they just want to sit down in a heap and watch the telly or play their games. There must be some way to tell them, maybe through a video game or something, to tell them how to look after their bones.

‘You have up until you are about 30 and that’s your cut-off point. The trouble is that’s the age you don’t think about these things.

‘You feel like you are invincible and it’s about what you look like. Food becomes about what your figure is like, not what it is doing for your body.’ Camilla revealed that her children Tom and Laura are acutely aware of the risks.

‘They were horrified by seeing my mother getting smaller and smaller,’ she said.

‘They worshipped her. Suddenly they saw this tiny woman stooped in agony. It is something they will remember for the rest of their lives. But people who haven’t seen their parents or grandparents like that will think: “We’re never going to get that.” It’s the immediacy of youth.’ 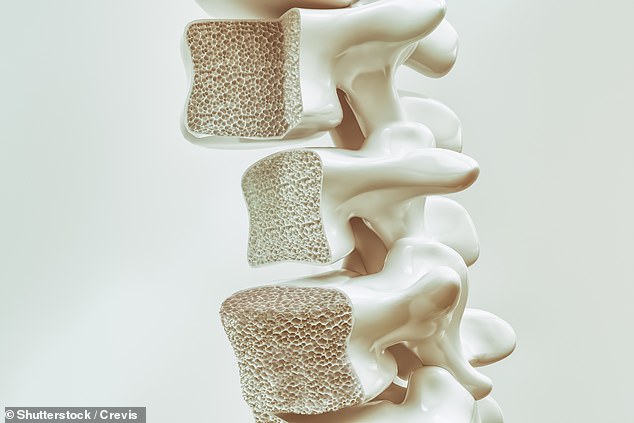 Each year the NHS has to deal with 500,000 broken bones caused by osteoporosis (pictured is an impression of what it does to your bones) – around one every minute 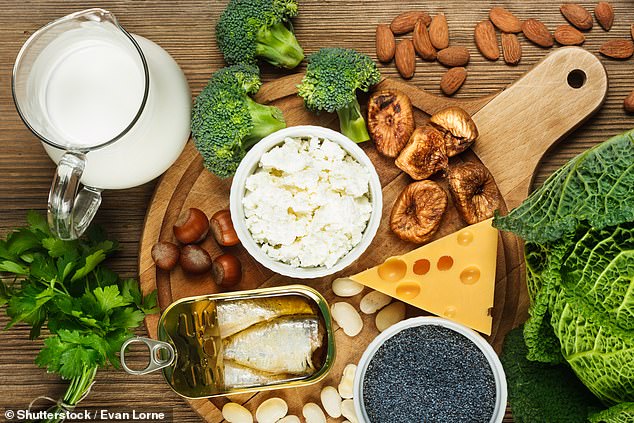 The risk of osteoporosis, which causes bones to lose their strength and break more easily, can be drastically reduced by maintaining a healthy body weight, eating plenty of calcium-rich foods (pictured)

Camilla was speaking at an event yesterday at the Science Museum to mark the official launch of the newly-titled Royal Osteoporosis Society. She has supported the organisation, previously known as the National Osteoporosis Society, for more than 20 years, becoming its patron in 1997 and then its president in 2001.

The Queen has given her seal of approval to the charity by permitting its new royal name.

In an impromptu address, Camilla said she wished her late mother could be with her to see the progress being made against osteoporosis. She said: ‘It was 25 years ago that my mother died as a result of osteoporosis. In fact, she was exactly the same age as I am now.

‘My family and I were completely devastated, but also, we didn’t understand how somebody could be in so much pain, and we were unable, and the doctors seemed unable, to do anything about it.’

The duchess’s visit marked the launch of the world’s first osteoporosis and bone research academy, which will bring together leading clinicians and academics to drive the research to find a cure for the crippling disease.

She met supporters of the society including long-time ambassador Nerys Hughes, the Welsh actress known for the BBC TV series The Liver Birds.

The pair joked about Camilla posing on Tuesday in front of Liverpool’s Liver Bird angel wings – as shown in the Mail yesterday.

Miss Hughes, whose aunt and sister were diagnosed with osteoporosis, said of the duchess: ‘It’s fantastic to have someone with such personal knowledge of the disease representing the society.’

Bobby Clay was just 18 and one of the country’s most promising junior athletes when she was told she had osteoporosis.

The shock diagnosis has put her career as a gold-medal winning middle distance runner on the line – and left her living with the bones of an elderly woman.

A student at Loughborough University who had been competing internationally for Team GB juniors since the age of 15, Miss Clay unexpectedly broke her foot while swimming. 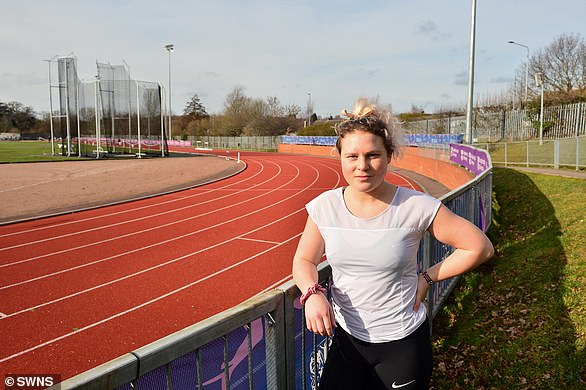 She was sent for a scan that showed very low bone density in her spine compared with most young women, caused by over-training.

She was running more than 100 miles a week – coupled with an insufficient calorie intake for that level of output. Overnight, her life as she knew it changed. 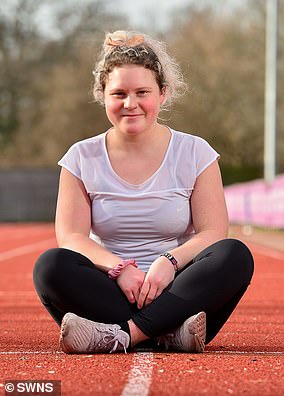 Ms Clay (pictured) was running more than 100 miles a week – coupled with an insufficient calorie intake for that level of output. Overnight, her life as she knew it changed

Miss Clay, now 21, said: ‘I can’t say I had ever heard of osteoporosis. It certainly never occurred me to that it could happen to someone so young or that it would happen to me. It was just devastating.

‘My sport has always been part of my identity. At any one time I usually have three or so fractures, mainly in my lower limbs but I also have spinal issues. Now I can’t even run. It was my body saying it had had enough.’

She has no doubt that social media has a big part to play in the rise of osteoporosis among young people.

She said: ‘You can get so caught up in the world of social media, where you believe everything to be true and you are prepared to abuse your body just to conform to a certain look – what you are led to believe is attractive.

‘But what people forget is that if they can edit their photos and use filters, then other people do too. Life is not what it seems online.’