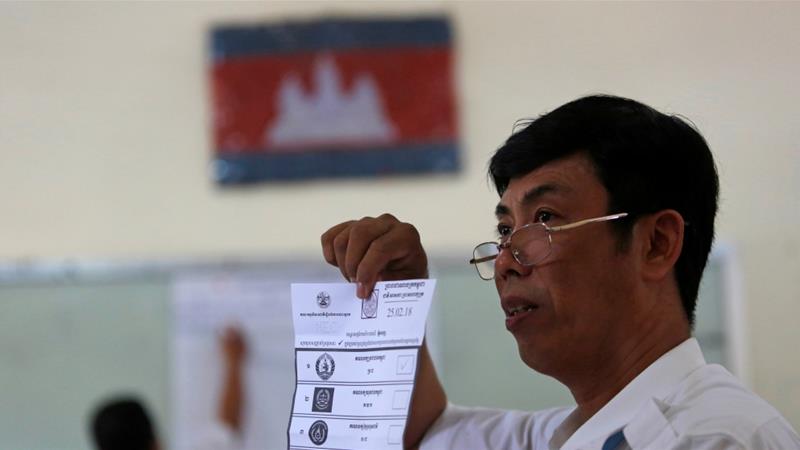 Cambodia’s prime minister has accused the US government of being dishonest in its announced suspension of aid to the Southeast Asian nation, saying Cambodia had already stopped receiving aid from the US in 2016.

“Please, US ambassador, answer this one question: Why did you announce cutting aid while there is no aid? Do you intend to distort the reputation of Cambodia?”

The US will cut military support and financial aid to Cambodia over a series of undemocratic “setbacks”, the White House announced recently.

Cambodia’s management of its recent senate election, held on Sunday, is among a number of concerns held by the US regarding the health of democracy in the Southeast Asian country, the White House said on Tuesday.

“Senate elections on February 25 … failed to represent the genuine will of the Cambodian people,” a White House statement said.

“These setbacks compelled the United States to review its assistance to Cambodia to ensure that American taxpayer funds are not being used to support anti-democratic behaviour.”

The US will cut, or reduce, several treasury, USAID and military assistance programmes that support Cambodia’s armed forces and officials following the review, the statement said, adding that assistance for health, agriculture and mine-clearing programmes would continue.

The US has spent more than $1bn on supporting “economic, social and democratic well-being” in Cambodia during the last 25 years, according to the White House.

Three other parties contested the election, according to the Phnom Penh Post newspaper.

Cambodia’s lower parliamentary house, the National Assembly, and ruling monarch appoint the other four members of the upper house.

The opposition Cambodia National Rescue Party (CNRP), however, declared the vote as undemocratic, saying authorities prevented more than 5,000 of its councillors and legislators from voting.

Sam Rainsy, a former leader of the CNRP, described the election as a “pointless farce that will deceive no one” in a Twitter post on Sunday.

Cambodia’s Supreme Court dissolved the CNRP, which was accused of plotting to overthrow the government, in November 2017.

The Cambodian government, led by Prime Minister Hun Sen, had asked the Supreme Court to hold the trial.

Two months earlier, Kem Sokha, then leader of the CNRP, was jailed on charges of treason.

Cambodian authorities allege Sokha colluded with the US to topple the government, an accusation denied by the US and Sokha himself.