The federal government temporarily closed public access on Friday to parts of the Merced River where a family of three and their dog mysteriously died last month after toxic algal blooms were recently found in the water.

The move by the U.S. Department of the Interior comes after the U.S. Forest Service temporarily closed down the trail that the family was hiking on earlier in the week due to “unknown hazards found in and near the Savage Lundy Trail.”

The deaths of Jonathan Gerrish, Ellen Chung, their 1-year-old daughter, Miju, and their dog, Oski, in mid-August have baffled investigators.

The family went hiking on a Sunday when temperatures reached as high as 109 degrees, according to the Mariposa County Sheriff’s Office. When Gerrish didn’t show up for work on Monday, a friend reported them missing, and their bodies were found on the Savage-Lundy trail the next morning about 1.5 miles from their car with no clear cause of death.

The Savage-Lundy trail runs through an area of the Sierra National Forest known as Devil’s Gulch, ending at the South Fork Merced River. 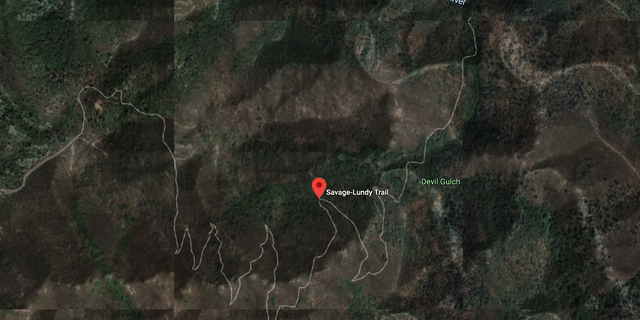 The Savage-Lundy trail ends at the South Fork Merced River, which was shut down on Friday but the Bureau
(Google Maps)

The Bureau of Land Management said Friday that “toxic algal blooms” were detected in the Merced River.

“These algal blooms can produce toxins that can make people and pets extremely sick,” BLM Mother Lode Field Manager Elizabeth Meyer-Shields said in a statement Friday. “We will continue to monitor for the algae’s presence and look forward to when the public can safely recreate in the Merced River.”

The California Department of Fish and Wildlife warned hikers in July “not to swim, wade or allow their pets to enjoy the water” due to potentially harmful algal blooms in the South Fork Merced River.

The Mariposa County Sheriff’s Office is still awaiting toxicology reports for the family and their dog after autopsies didn’t turn up any clues. Authorities have ruled out weapons and chemical hazards in their deaths.

The Bureau of Land Management’s closure order will be in effect until Sept. 17 or until conditions change.