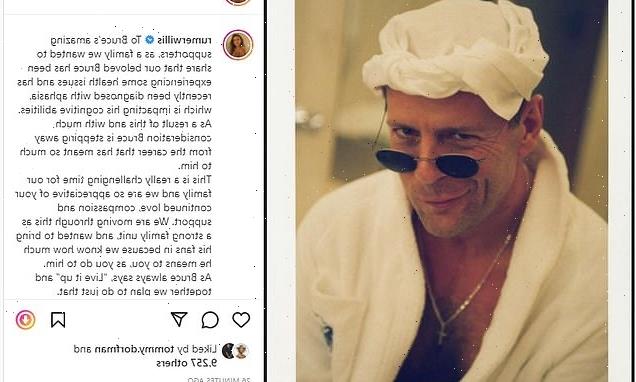 BREAKING NEWS: Bruce Willis, 67, is diagnosed with degenerative brain condition and will step away from acting

Bruce Willis, 67, has been diagnosed with a brain condition that affects his ability to understand language and will be stepping away from acting, his family has announced.

In a statement posted to social media, his family said: ‘To Bruce’s amazing supporters, as a family we wanted to share that our beloved Bruce has been experiencing some health issues and has recently been diagnosed with aphasia, which is impacting his cognitive abilities.

‘As a result of this and with much consideration Bruce is stepping away from the career that has meant so much to him.’

The announcement comes nearly one year after OK Magazine reported that Willis sold his New York property to spend more time with his wife and children in Los Angeles. 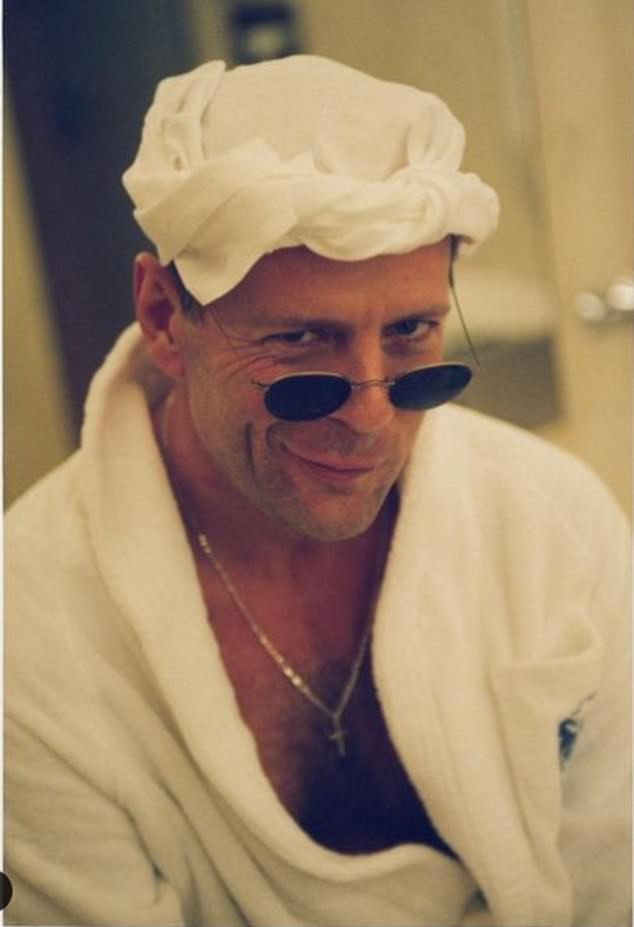 Bruce Willis, 67, has has been diagnosed with a brain condition called aphasia and will be stepping away from acting, his family has announced 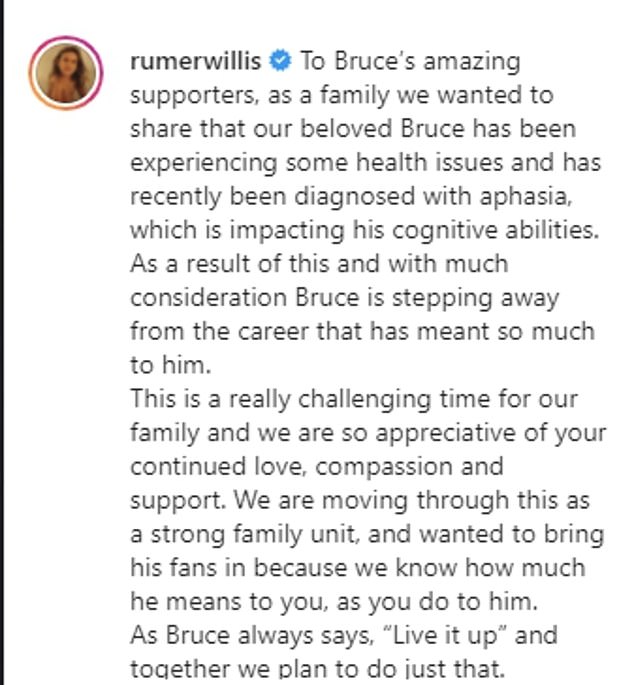 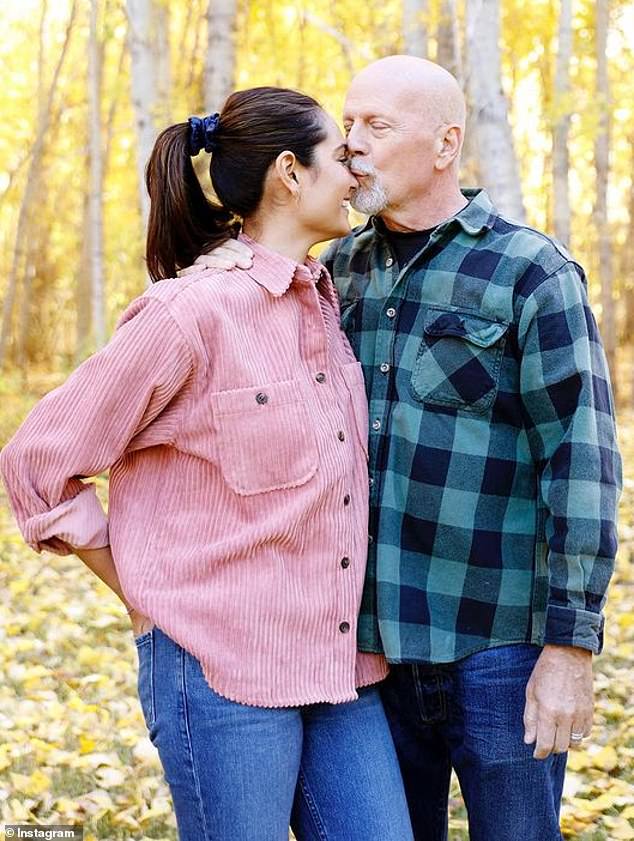 The statement was signed by his wife, Emma (pictured) and his ex-wife Demi Moore as well as all of his children 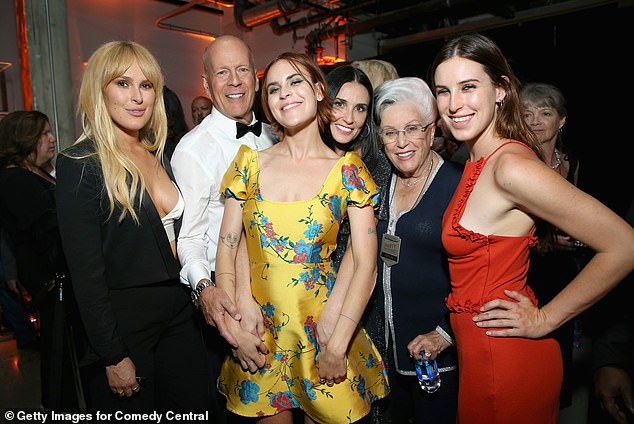 The statement added: ‘This is a really challenging time for our family and we are so appreciative of your continued love, compassion and support. We are moving through this as a strong family unit, and wanted to bring his fans in because we know how much he means to you, as you do to him.

‘As Bruce always says, “Live it up” and together we plan to do just that,’ the statement, which was signed by his wife Emma, his ex-wife Demi Moore and all of his children, concluded.

According to the National Aphasia Association, the condition is an impairment of language, affecting the production or comprehension of speech and the ability to read or write.

The association reports the condition is always due to injury to the brain, most commonly from a stroke, particularly in older individuals.

Head trauma, brain tumors or from infections can also cause aphasia.

It is currently unclear what lead to Willis’ diagnosis. 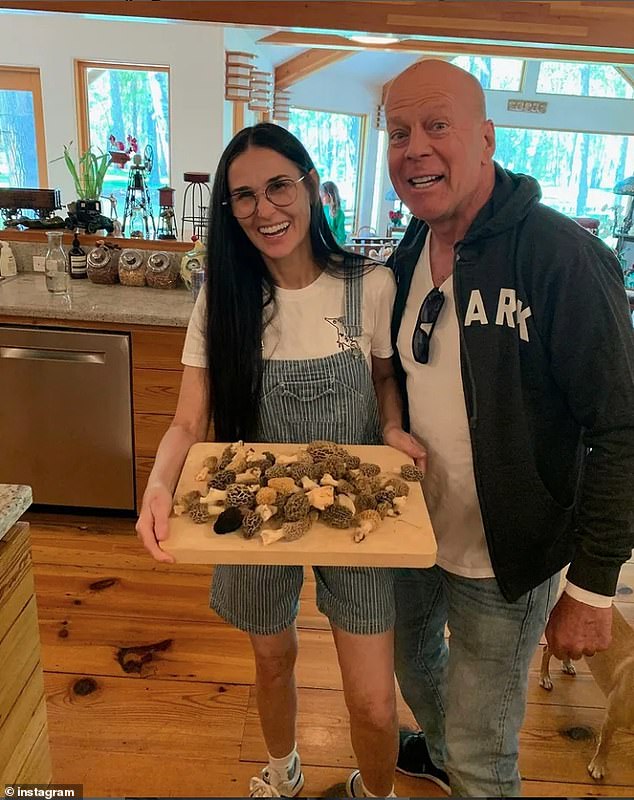 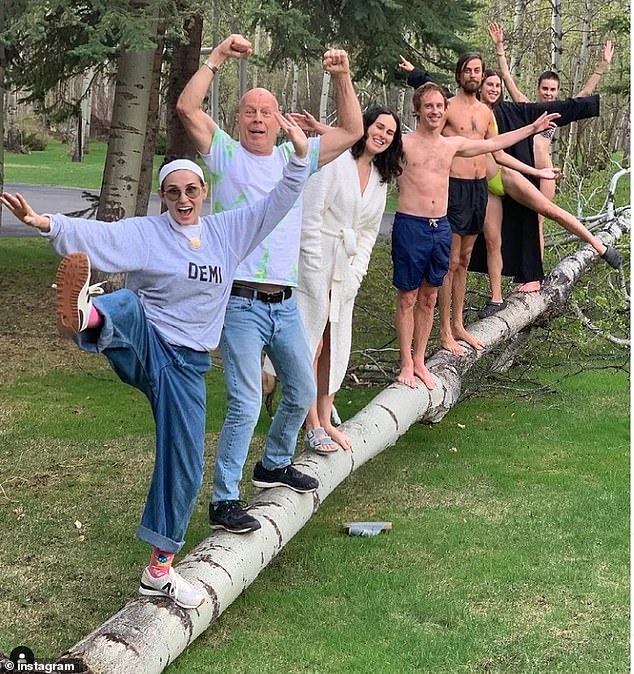 Willis, second from left, recently celebrated his 67th birthday with all of his family 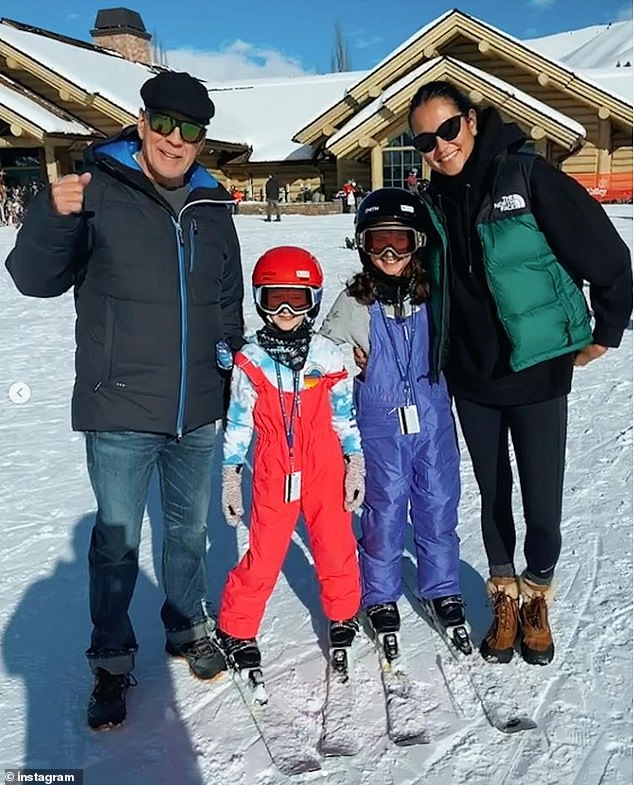 Willis shares his youngest two children, Evelyn and Mabel, with his wife Emma

The announcement marks an end to Willis’  decades-long career, which began with small roles in television shows like Miami Vice and The Twilight Zone in the early 1980s, according to IMDB.

His first big role was as John McClane in the hit film Die Hard in 1988, leading to six sequels.

Willis went on to star in films like Pulp Fiction, 12 Monkeys and the superhero film, Unbreakable, for which he reprised his role over a decade later in the 2016 film Split and the 2019 film Glass.

He has also appeared in a number of television shows, including the beloved classic Friends, Moonlighting and as the main voice actor in Bruno the Kid.

Willis has also recently completed multiple projects that are in post-production, including Vendetta, Fortress: Sniper’s Eye and White Elephant.

It’s unclear what will happen with Fortress 3, which is currently in pre-production.

APHASIA: THE LANGUAGE DISORDER THAT AFFECTS A PERSON’S ABILITY TO COMMUNICATE

Aphasia is a condition that causes a person to struggle to communicate, whether verbally or in writing.

It can occur after a stroke, head injury, or another traumatic event. It can also be the result of a tumor or a degenerative brain condition like Alzheimer’s.

Aphasia often occurs very suddenly and results from trauma or injury to the left side of the brain.

The condition is sometimes temporary.

People who are middle-aged or older are at most risk of developing the condition.

There is no cure for the condition, though it can be treated with regular speech therapy to relearn language skills and communication strategies.

The NIH reports that around one million Americans have aphasia, and around 180,000 cases are diagnosed every year.

Doctors can often spot aphasia on an MRI or CT scan to identify where in the brain it is occurring.

There are three common types of aphasia, ‘fluent’, ‘non-fluent’ and ‘global.’

The most common type of fluent aphasia is called Wernicke’s aphasia.

A person with Wernicke’s  aphasia may just speak by using long strings of words – some made up – that have little to no meaning when put together.

Broca’s aphasia is the most common type of non-fluent aphasia.

It is often paired with some sort of paralysis or weakness effecting the right side of the body.

A person suffering from Broca’s aphasia often speaks in short, quick, sentences that require much effort.