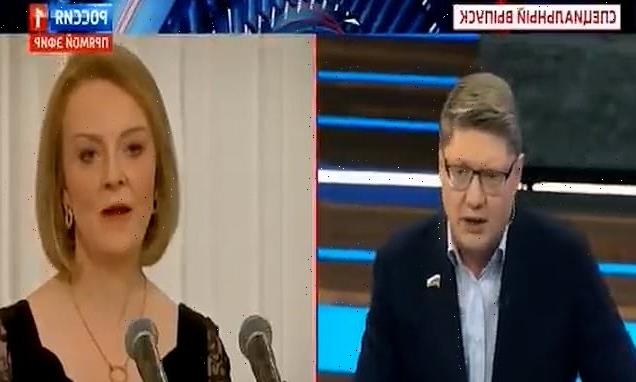 Britain STOLE fish and chips and should clear off from Europe to ‘eat their porridge’ and pray for their ‘moss-covered’ Queen, say Putin’s ranting talking heads in hilarious tirade on Russian state TV

This is the darkly funny moment an MP from Putin’s ruling party tells the UK to ‘clear off and eat porridge’ before accusing Britain of stealing fish and chips from Russia.

Andrey Isayev, 50, also told Brits to ‘pray for your moss-covered Queen’ in the bizarre tirade on main TV channel Russia 1 on Friday.

The incredible comments came during a heated discussion on the Kremlin’s humiliating failed invasion of Ukraine.

United Russia politician Isayev began his remarks by saying Britain and Poland are ‘the mad ones’ of NATO. The Western alliance is a ‘two-headed dragon’, he added, and ‘Britain is the more evil head’. 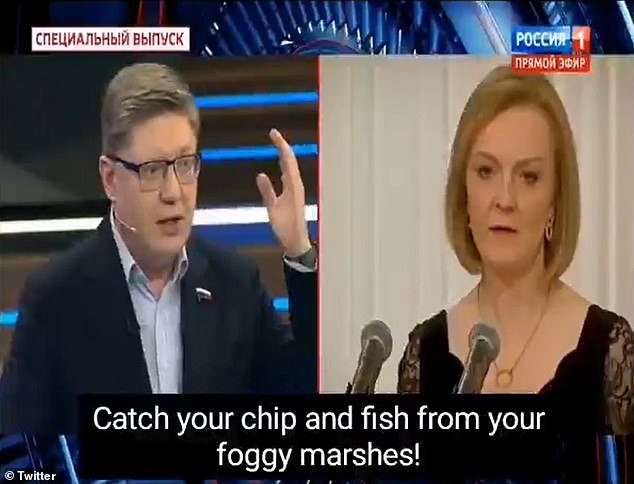 Even the Russia 1 presenters looked baffled as Isayev launched into Britain.

The eccentric politician continued: ‘We realise that they’re enemies. Historically the more hardcore anti-Russian one has always been the UK.

‘We too should take anti-British positions.

‘Clear off back to your island. Catch your chip and fish from your foggy marshes! Pray for your moss-covered Queen!’

Mr Isayev lost his job as the ruling party’s deputy leader in 2013 after he was booted off a plane during a drunken brawl with cabin crew.

The Duma parliamentarian threatened to fire Aeroflot flight attendants when they refused to move his assistant to business class. Fellow passengers filmed the fracas.

Isayev apologised for the outburst and said he was sorry ‘on behalf’ of his secretary.

The hilarious tirade followed a simulation on state TV of a nuclear attack on Britain.

On Thursday’s show the chairman of the nationalist Rodina party, Aleksey Zhuravlyov, pondered what would happen if Russia launched nuclear weapons against the UK, saying: ‘one Sarmat missile and the British Isles will be no more.’

When pulled up on the comment by one of the hosts, he insisted he was ‘saying this seriously’, while another host added that the UK has nuclear weapons too and that ‘no one will survive in this war’.

Producers on the show then showed viewers a map seeming to suggest missiles could be launched from Kaliningrad, the Russian enclave between Poland, Lithuania and the Baltic Sea.

It suggested these could reach Berlin in 106 seconds, Paris in 200 seconds and London in 202 seconds.

It comes as the UK and other western nations continue in their support for Ukraine, with allies providing equipment, military vehicles and weapons to the beleaguered country.

In response to the western support of Ukraine, war-mongering Putin ordered the military to test-fire its Sarmat missiles, which are also known as Satan II.

Last week Putin bragged that his country’s hypersonic missiles could ‘break through all modern defences’ and could be ready to strike the UK ‘by autumn’.