The UK now has the highest daily rate of coronavirus infections in Europe after overtaking Spain, figures revealed today.

Statistics compiled by the Oxford University-based research platform Our World in Data show that 107.3 people per million in the UK tested positive for the virus on average per day over the last week.

The UK had for months been one of the least-affected countries on the continent after racing ahead of the EU with its vaccine rollout when many European nations were battered by a second wave.

But an outbreak of the ultra-infectious Indian Covid variant has pushed Britain’s infection rate back up and forced Prime Minister Boris Johnson to pump the brakes on the final stage of his roadmap out of lockdown.

The UK is now ahead of the 43 other European countries included in the statistics. Spain has the second-highest Covid infection rates, with 104.6 cases per million people, followed by Latvia (92.1) and Andorra (90.6).

Italy, which was one of the European countries hit worst by the first wave of the virus last March, now has just 28.5 cases per million.  Portugal, which moved to the UK’s amber travel list last week after an increase in cases, has recorded 70.58 per million. 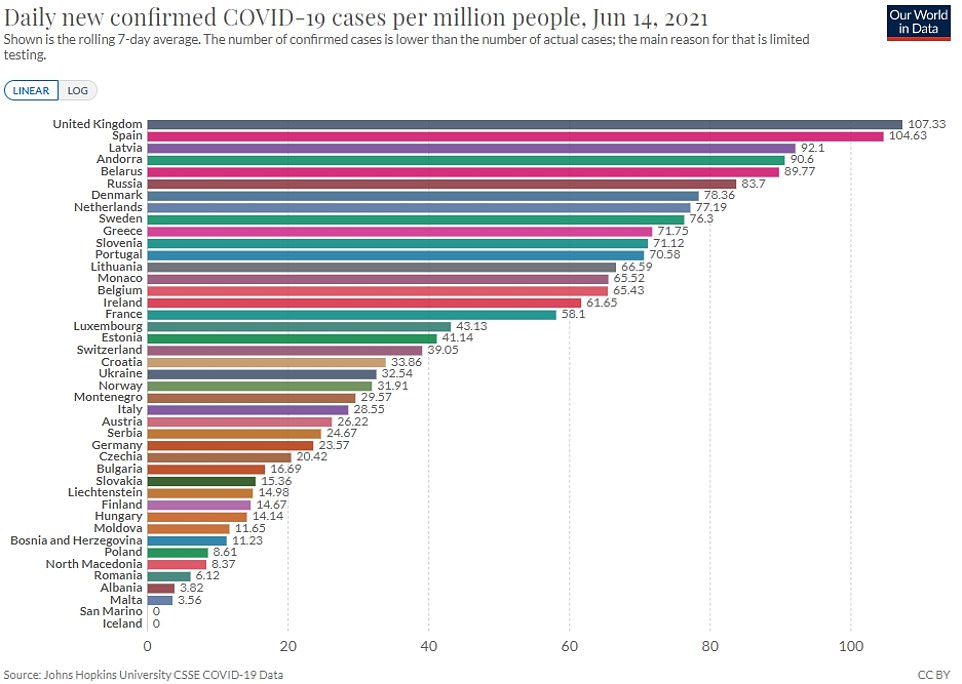 Iceland and San Marino are at the bottom of the list and the only countries to have zero cases per million.

According to figures published by the World Health Organization, Iceland recorded just five cases yesterday, while San Marino recorded none.

It is possible that the UK’s infection rate is being inflated slightly because it is carrying out more tests per person than most other nations.

All over-18s are expected to be invited for their first Covid vaccine dose by the end of this week, NHS England’s boss claimed today.

Sir Simon Stevens told the NHS Confederation’s annual conference that the health service would ‘finish the job’ of the vaccination programme to the ‘greatest extent possible’ over the next four weeks.

He said he expects all remaining adults to be offered their first vaccine by the end of the week but admitted ‘supply continues to be constrained’.

The vaccine roll-out was extended to all 23- to 24-year-olds today, with people in the age group now able to book their appointment.

In light of the rapidly spreading Indian variant, the Government has brought forward its target for vaccinating all adults until July 19 — the same day the final unlocking has been pushed back until. Ministers had previously pledged to offer jabs to all over-18s by July 31.

Boris Johnson last night announced a delay to the original June 21 ‘Freedom Day’ by four weeks, amid fears a third wave of Covid could overwhelm the NHS.

The Our World in Data statistics also show that despite having the highest Covid infection rate, the UK has administered the fourth most vaccines in Europe over the last week, which has kept death rates flat.

As the UK became the Covid infection capital in Europe, officials also announced 7,673 more cases today, an increase of a quarter in a week.

The number of infected patients admitted to hospital — a figure that lags behind cases by several weeks because of how long it can take to become seriously ill — also soared by 46 per cent.

Some 184 hospitalisations were recorded across the UK on June 9, the most recent day figures are available for. On June 2, roughly when the NHS started to feel extra pressure from the mutant Indian strain, the figure was just 126.

Despite the uptick in admissions, deaths remain flat. Ten more victims were added to the official death toll today, compared to 13 last week.

Separate figures today revealed that England and Wales saw fewer Covid deaths in the first week of June than at any time since March 2020. Office for National Statistics data shows 52 Covid deaths occurred between May 29 and June 4, down from 69 the week before.

But the rate is climbing in the North West, where it doubled from eight deaths in the space of a fortnight to 16.

No10’s top scientists expect the death count to rise in coming weeks because of the spike in cases but remain confident that vaccines will thwart the disease, preventing tens of thousands of people who get infected from being hospitalised or dying.

Health chiefs today also revealed that the UK has passed the milestone of fully vaccinating 30million adults, or 57.3 per cent of over-18s. The UK yesterday dished out a further 132,117 first doses and 230,959 second doses.

Chief medical officer Chris Whitty warned at last night’s Downing Street press conference that hospitalisations had risen 61 per cent in the North West in just a week, as Boris Johnson announced that June 21’s Freedom Day would be postponed until July.

Professor Whitty warned this trend was expected to be seen across the rest of the country if June 21 had gone ahead as planned.

Extra support to carry out surge testing, tracing, isolation support and maximising vaccine uptake has already been deployed across the North West to tackle the more contagious variant. Data shows it helped to thwart the spread of the virus in Bolton. 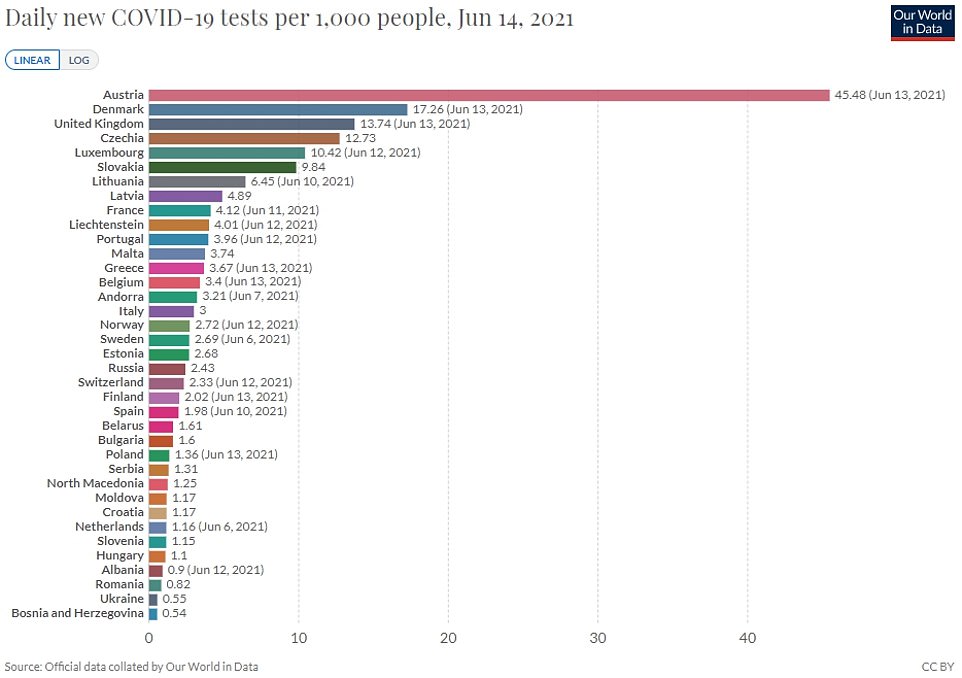 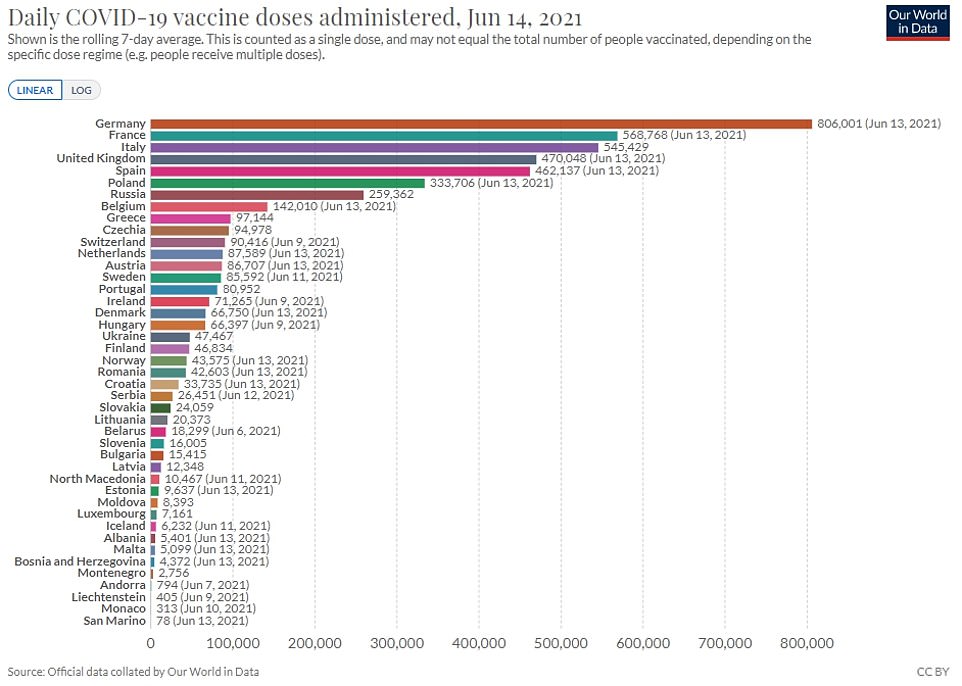 The UK has administered more 470,048 first and second doses of the vaccine in the last seven days, with only Germany, France and Italy injecting more people 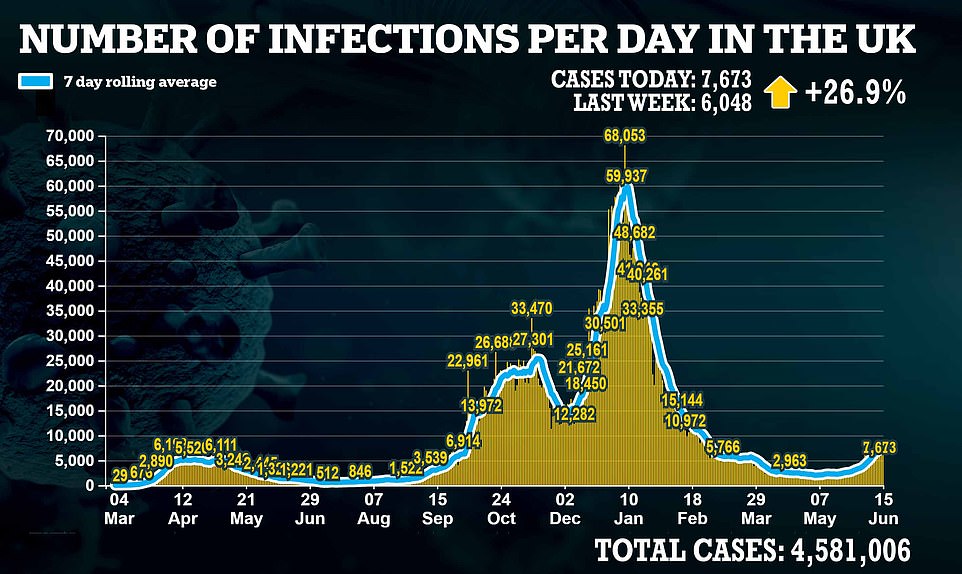 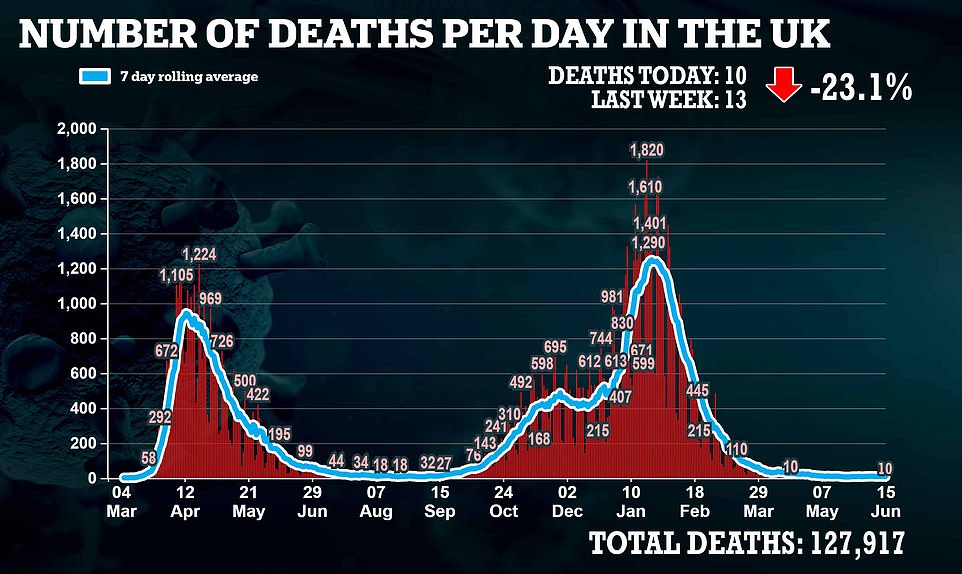 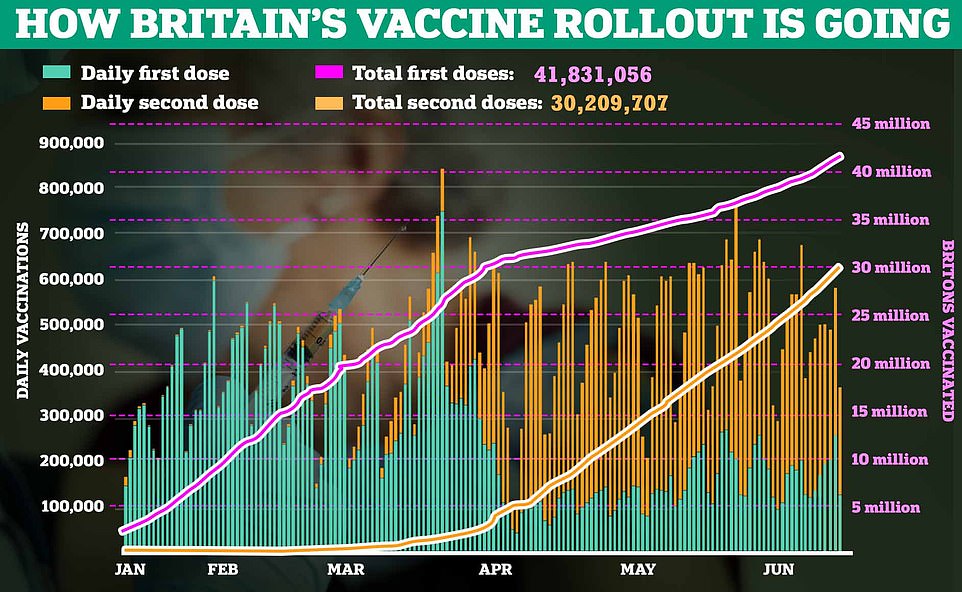 Daily UK figures show 7,673 people tested positive for the virus, 184 patients were admitted to hospital and 10 people died. The data also shows that 41.8million people have been given their first dose of a vaccine, while 30.2million have received their second

Ministers urge another 3.6MILLION people in Indian variant hotspots in England not to travel

Millions more people in the Midlands and North West of England are being urged not to travel or meet people indoors in an attempt to curb the spread of the Indian Covid variant.

In guidance released last night, roughly 3.6million residents in Birmingham, Liverpool, Warrington and parts of Cheshire were asked to minimise their movements in and out of the affected areas, which are recording higher than average levels of the mutant strain.

But Boris Johnson made no mention of the fresh advice in his dramatic Downing Street press conference last night, where he confirmed England’s final unlocking would be pushed back by four weeks amid fears the mutant strain could overwhelm hospitals.

Remaining lockdown restrictions are now due to be lifted on July 19, which the Prime Minister last night promised would be the ‘terminus date’.

The Government today doubled down on its new Freedom Day pledge, with Michael Gove saying he was ‘as confident as confident can be about that date’, despite fears from backbench Tory MPs that the goalposts will be moved once again.

Asked about whether the Prime Minister could put Tory fears to bed this afternoon, Mr Johnson’s official spokesman said ‘there is not a significant benefit from a further delay beyond the four weeks because of the success of the vaccination programme.’

The six authorities hit with the new guidance are also being offered a ‘package of support’ from the Government which includes surge testing, enhanced contact tracing and financial support to Covid cases and their contacts who have been asked to self-isolate.

The Army will be sent in to help carry out the extra testing to flush out cases of the virus, while NHS boards in the area will be given extra help to ensure vaccine uptake is as high as possible. Residents are also being asked to get tested twice a week.

They join the 4m people in Greater Manchester and Lancashire, who were placed under the new rules last week. The enhanced measures cover around 9.3m residents across England, the equivalent of 16 per cent of the entire population.

Millions more people in the Midlands and North West of England are now being urged not to travel or meet people indoors in an attempt to curb the spread of the Indian Covid variant.

In guidance released last night, roughly 3.6million residents in Birmingham, Liverpool, Warrington and parts of Cheshire were asked to minimise their movements in and out of the affected areas, which are recording higher than average levels of the mutant strain.

But Boris Johnson made no mention of the fresh advice in his dramatic Downing Street press conference last night, where he confirmed England’s final unlocking would be pushed back by four weeks amid fears the mutant strain could overwhelm hospitals.

Remaining lockdown restrictions are now due to be lifted on July 19, which the Prime Minister last night promised would be the ‘terminus date’.

The ONS figures released today show that over 30 per cent of all Covid deaths in England and Wales – 16 of 52 – were recorded in the North West.

The number of people who had Covid mentioned on their death certificated between May 29 and June 4 was 98, which accounted for just 1.3 per cent of all deaths in England and Wales.

Of those deaths, 96 were in England and two were in Wales.

The numbers are up slightly from 95 recorded in the week before, but this slight increase was likely caused by registration lags due to the spring bank holiday, when many registry offices closed.

The data shows that 7,778 deaths were recorded in England and Wales that week – 4.8 per cent below the five year average, with the ONS noting this number was also impacted by the holiday.

Of the 98 people who had Covid mentioned on their death certificate between May 29 and June 4, only 57 had this recorded as their underlying cause of death.

The majority of Covid deaths took place in hospitals, followed by care homes.

He said this is ‘particularly unhelpful’, because accurate statistics for that week could have been ‘particularly informative’, as it is three weeks after restrictions were lifted for step three of England’s roadmap.

‘Mid-May is also when the Delta variant was becoming dominant, so any effect on deaths from that could have shown up,’ he said.

‘Late registrations because of the bank holiday mean it’s not at all surprising that the total numbers of registered deaths from all causes is lower than the previous week, but we can’t tell yet if that’s a real decrease.’

He said it is ‘very likely’ that when complete data is published – stating when the deaths happened, rather than when they were registered – it will be higher than 98.

Professor McConway warned that despite the number of Covid victims being ‘very small’ compared to most of the pandemic, ‘a rise is not good news after consistent decreases every week since mid-January’.

Though he said there is not yet a ‘major cause for concern’.

‘All these deaths are important and sad events for the families and friends of the person who died, but the numbers are still small,’ he said.

‘What’s important is that a close eye is kept on how the numbers change as the Delta variant becomes more and more established,’ Professor McConway added.