London: Britain has accused Russia of a "cynical and reckless" plot to sabotage the Tokyo Olympics in an apparent retaliation for its athletes being banned from competing.

This coincides with developments in the US, where six Russian military officers have been indicted in absentia for wide-scale hacking of elections, infrastructure and events across the world, and placed on the FBI's most wanted list.

Foreign Secretary Dominic Raab on Monday claimed Unit 74455 of Russia's military intelligence agency, the GRU, had launched a swathe of cyber attacks against the 2020 Olympic and Paralympic games before the events were postponed due to the coronavirus pandemic.

The Russians targeted organisers, logistics services and sponsors and most likely wanted to disrupt the games as they were happening in the Japanese capital and cause chaos for officials, spectators and athletes, British officials said. 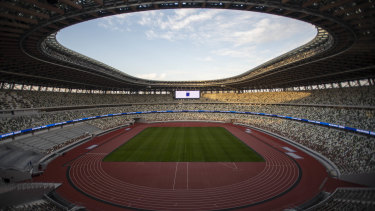 Tokyo’s new National Stadium was scheduled to host the opening ceremony of the 2020 Olympic Games before the event was postponed.Credit:Getty

The allegations from the UK emerged as officials in the United States were indicting six Russian intelligence operatives for interfering with the 2017 French presidential election, shutting down parts of Ukraine's power grid and launching cyber attacks against the 2018 Winter Olympics in South Korea.

Assistant attorney-general John Demers, the US Justice Department's most senior national security official, called the assaults "the most disruptive and destructive series of computer attacks ever attributed to a single group".

"No country has weaponised its cyber capabilities as maliciously or irresponsibly as Russia, wantonly causing unprecedented damage to pursue small tactical advantages and to satisfy fits of spite," he said.

Russia was banned from competing in both the 2018 Winter Olympics in PyeongChang and the 2020 summer games in Tokyo for repeated doping breaches.

Raab said the GRU's cyber unit tried to disguise itself as Chinese and North Korean hackers when it targeted the opening ceremony of the Winter Games. It was also found to have targeted television broadcasters, a ski resort, top Olympic officials and commercial sponsors.

Analysts at the UK's National Cyber Security Centre concluded that the attacks were designed to sabotage the running of the games because the malware was designed to wipe data from and disable computers and networks.

"The GRU's actions against the Olympic and Paralympic Games are cynical and reckless," Raab said. "We condemn them in the strongest possible terms."

The British government said its experts had determined there was a 95 per cent chance that the attacks were carried out by Unit 74455 of the GRU. Unit 74455 is also known as Sandworm, VoodooBear, Iron Viking and Industroyer.

Raab's statement does not attribute blame directly to the Russian government but British officials have told the UK press that the attacks could not have occurred without the knowledge of the Russian state.

Kovalev is accused of targeting the International Olympic Committee as well as unnamed Olympic athletes.

The Justice Department claimed the attacks used destructive malware like KillDisk and Industroyer to trigger blackouts in Ukraine, as well as NotPetya, which caused nearly US$1 billion ($1.4 billion) in damage to Heritage Valley Health System in Pennsylvania, a FedEx subsidiary and a large but unnamed US pharmaceutical manufacturer.

The GRU and Russian government are yet to responded to the allegations.