RUSSIA has been warned against "taking on" the Royal Navy after Moscow boasted it dropped bombs and fired warning shots at a British warship.

Rear Admiral Chris Parry said the targeted type 45 destroyer HMS Defender had the best anti-aircraft systems in the world could destroy any of Vladimir Putin's planes or ships if it wanted. 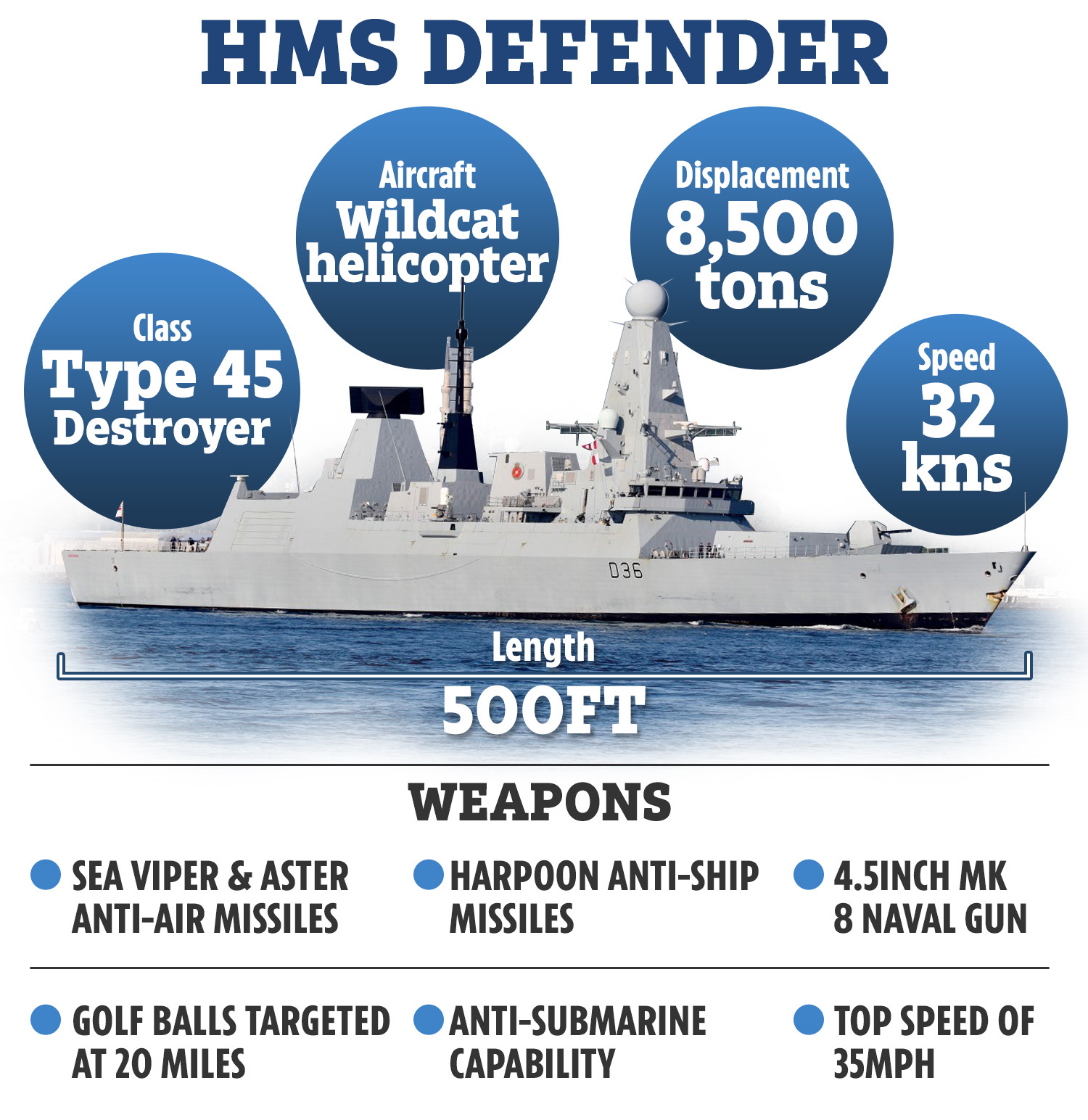 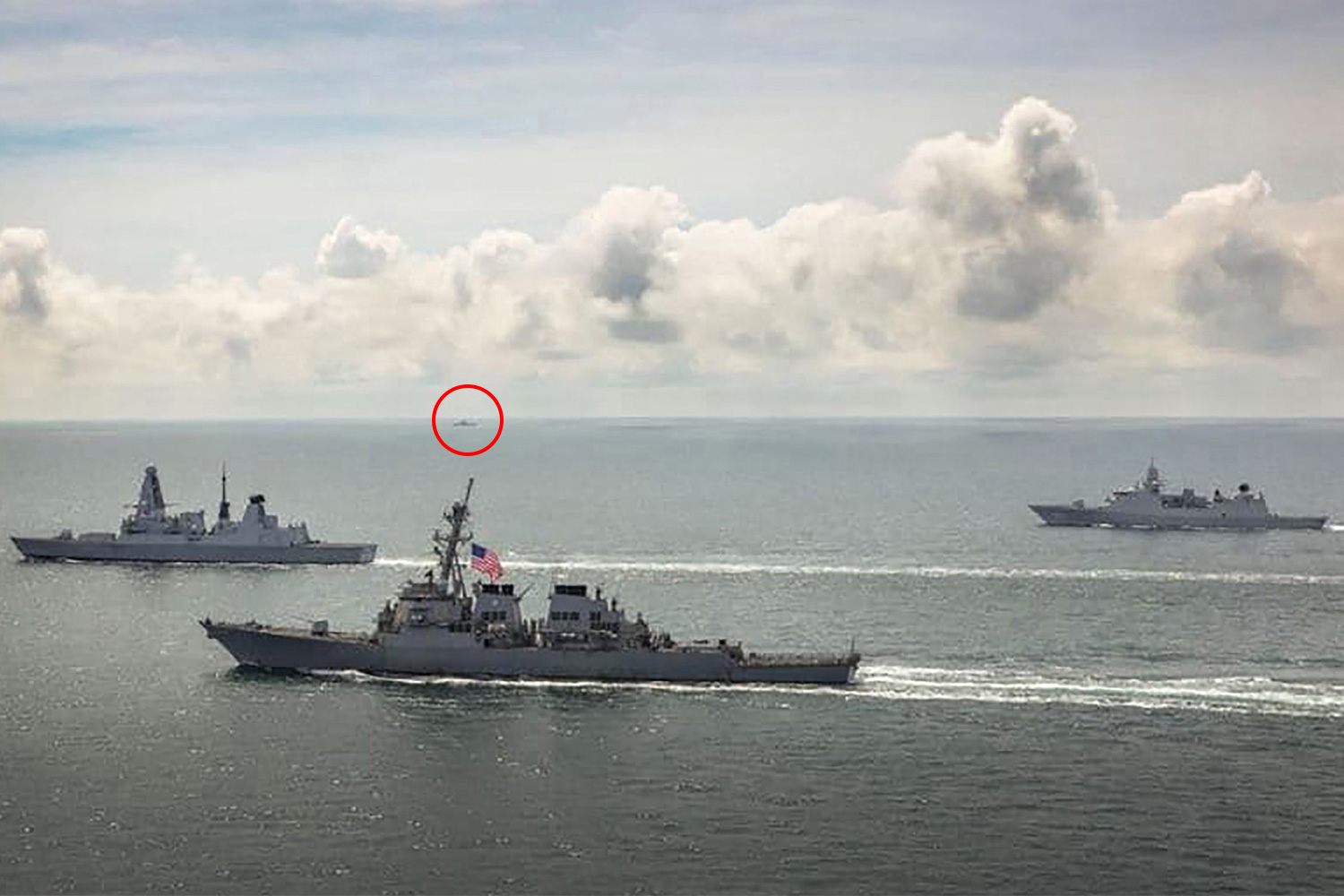 Russia today said it fired warning shots at a British navy destroyer in the Black Sea after it violated the country's territorial waters.

The HMS Defender "was given a preliminary warning that weapons would be used if the state borders of the Russian Federation were violated. It did not react to the warning," the Russian defence ministry said, according to Interfax news agency.

The ministry added that "a border patrol ship fired warning shots" and a Su-24 aircraft dropped four bombs along the destroyer's path. It said that the ship then left Russian waters.

The Ministry of Defence has insisted warship was simply conducting an "innocent passage" through Ukrainian waters.

But a different and more dramatic picture has been painted by a BBC news crew on board the 8,500 ton warship who say they heard shots fired.

The BBC reported that at times there were as many as 20 aircraft buzzing the warship and the sound of jets roaring overhead could be heard.

But Rear Admiral, a former Royal Navy commander, said: "This is not a ship you really want to take on if you are Russian.

"Most importantly HMS Defender has probably the best anti-aircraft systems; it can detect golf balls at a range of about 20 miles and can engage multiple targets."

"HMS Defender is a type 45 destroyer, her primary role is anti-aircraft defence, but she can pretty much do well against warships.

"She has an anti-submarine capability, she’s got a helicopter that can do all these things as well." 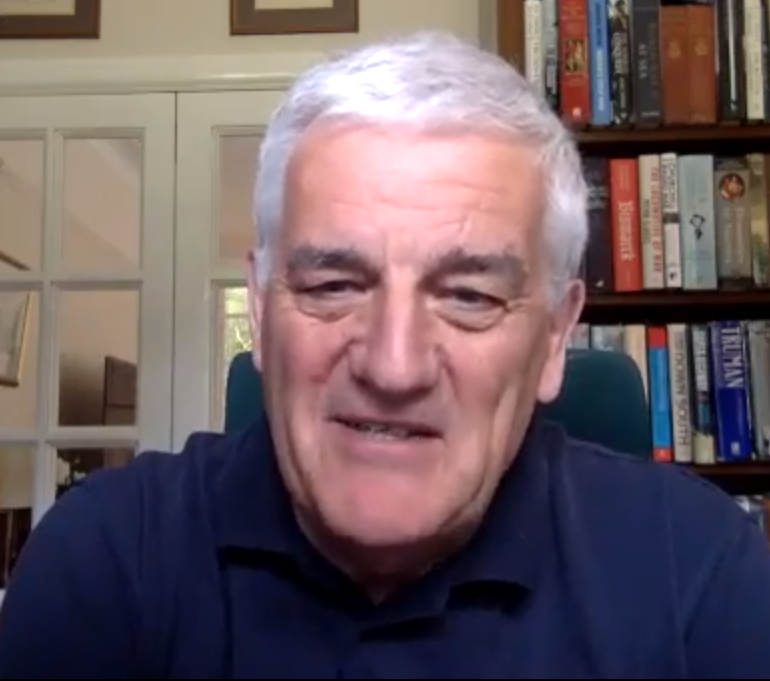 The Rear Admiral claimed Russia’s aggression was for their own internal audiences.

He said: "They want to say they have seen off a Royal Navy destroyer from their main fleet base in Sevastopol.

"They are very sensitive of course about Crimea which is Ukrainian territory, they’ve taken it over, but they try and sort of patrol the boundaries as if it is part of Russia.

"All the evidence shows that HMS Defender was in a traffic separation scheme which means she was totally legal from the point of view of international law.

"She was being trailed by some small border patrol craft. I think at one stage HMS Defender got a bit bored with it, so came up in speed.

"The patrol boats could not actually keep up, so in indignation they fired their guns somewhere, but nowhere near the ship.

"If you add to that the Russians were conducting some form of live fire exercise, some miles away, what the Russians have done is linked all these incidents and said they’ve seen Defender off the premises."

What is happening between Russia and Ukraine?

RUSSIA and the Ukraine have remained technically at war since 2014.

The conflict was triggered by the Ukrainian Revolution – when an uprising overthrew the pro-Russian government of Viktor Yanukovych.

Vladimir Putin's forces annexed the region of Crimea from Ukraine in a move which was widely condemned by the West.

The conflict then spiralled when pro-Russian groups in Eastern Ukraine then took up arms against the state.

Russia gave their backing the separatist forces which formed breakaway republics in Donetsk and Luhansk.

Putin's forces then launched a military incursion into these regions as they gave their support to the rebels.

Almost seven years have now passed and the War in Donbas remains at a stalemate.

Russia is sent as wanting to prevent Ukraine from cosying up to the West – and it has been accused of attempting to recapture territory lost at the fall of the Soviet Union.

Ukraine is now making overtures to join NATO, a move which would secure its own secure and also inflame tensions.

Some 100,000 troops were deployed by Russia to the border with Ukraine earlier this year amid fears the conflict could escalate into all out war between the two. 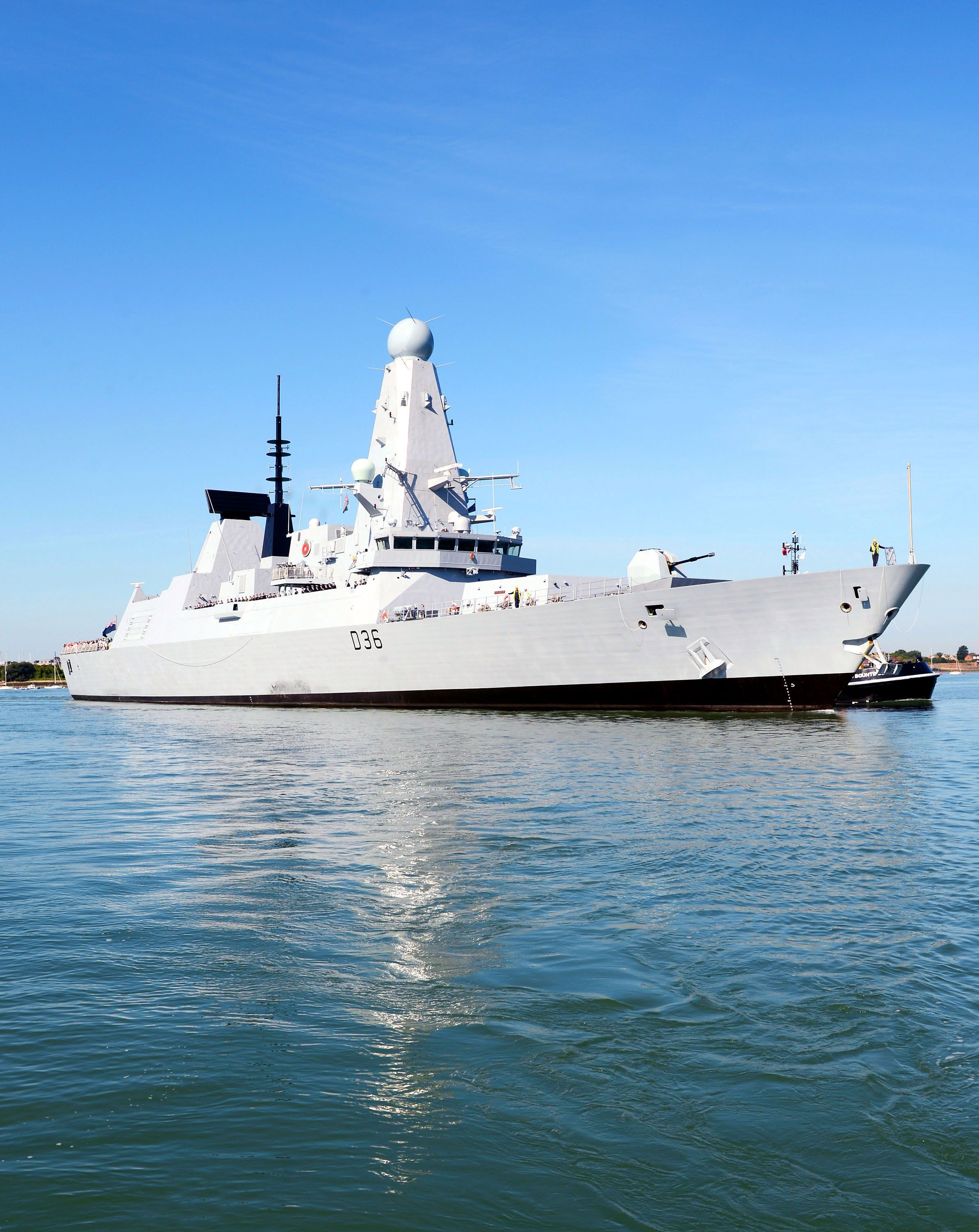 The BBC's Jonathan Beale, who is aboard HMS Defender, said the crew was on "high alert" and gunfire had been heard.

Speaking to BBC News he said there had been, at times, more than 20 Russian aircraft monitoring the Royal Navy destroyer and "warnings from Russian Coastguard vessels, and indeed we have heard shots fired, we believe they were out of range".

The broadcaster's defence correspondent said "there has been a lot of warnings from the Russian military, both vessels and also up above with aircraft".

He said: "Throughout this transit crew onboard HMS Defender have been on high alert, on action stations, and at one stage they did put on white flash (protective equipment) to protect their faces just in case there was going to be an exchange of fire but they did not think that would happen and it did not happen.

"They did hear gunfire, we think from one of the Russian Coastguards that was shadowing us." 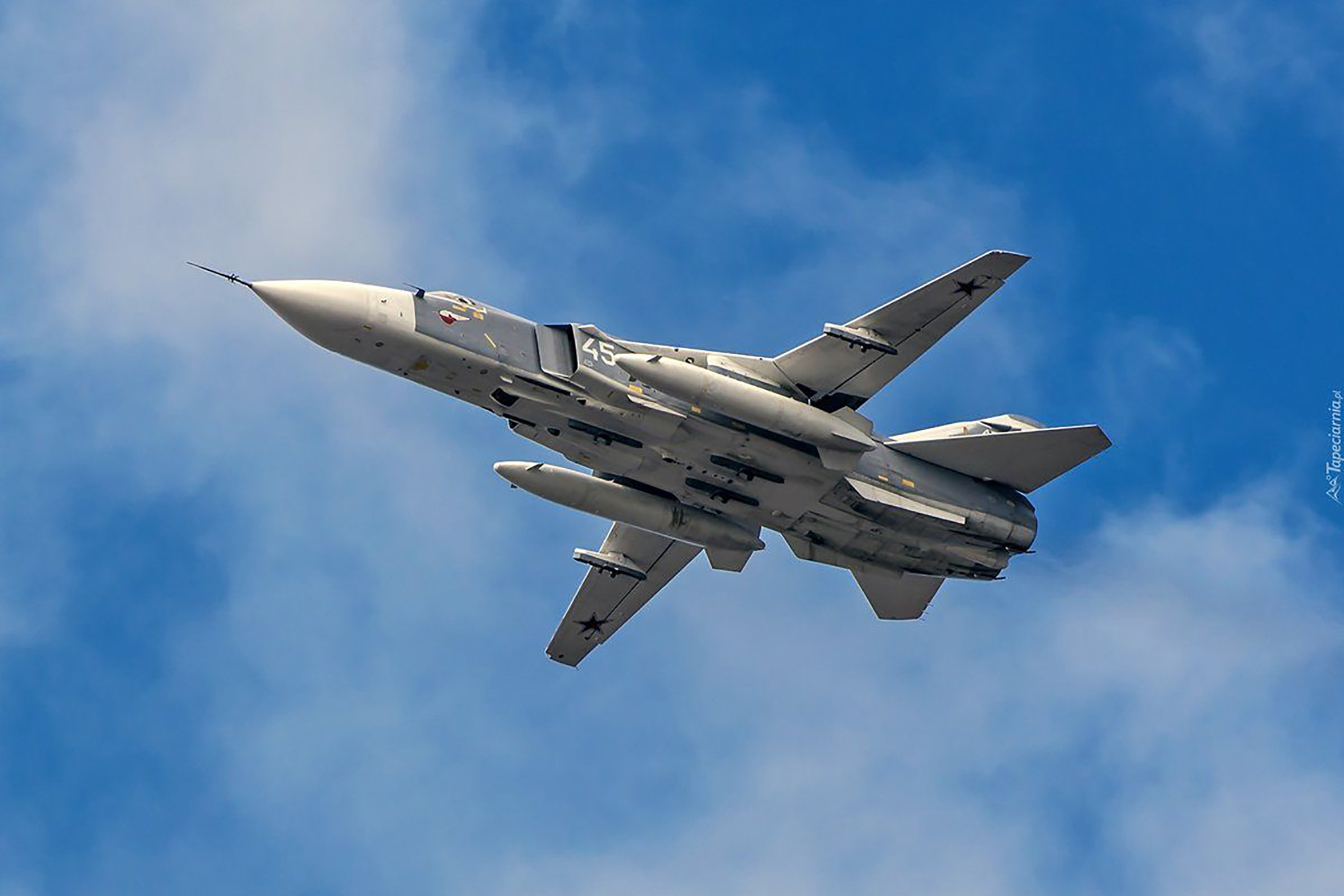 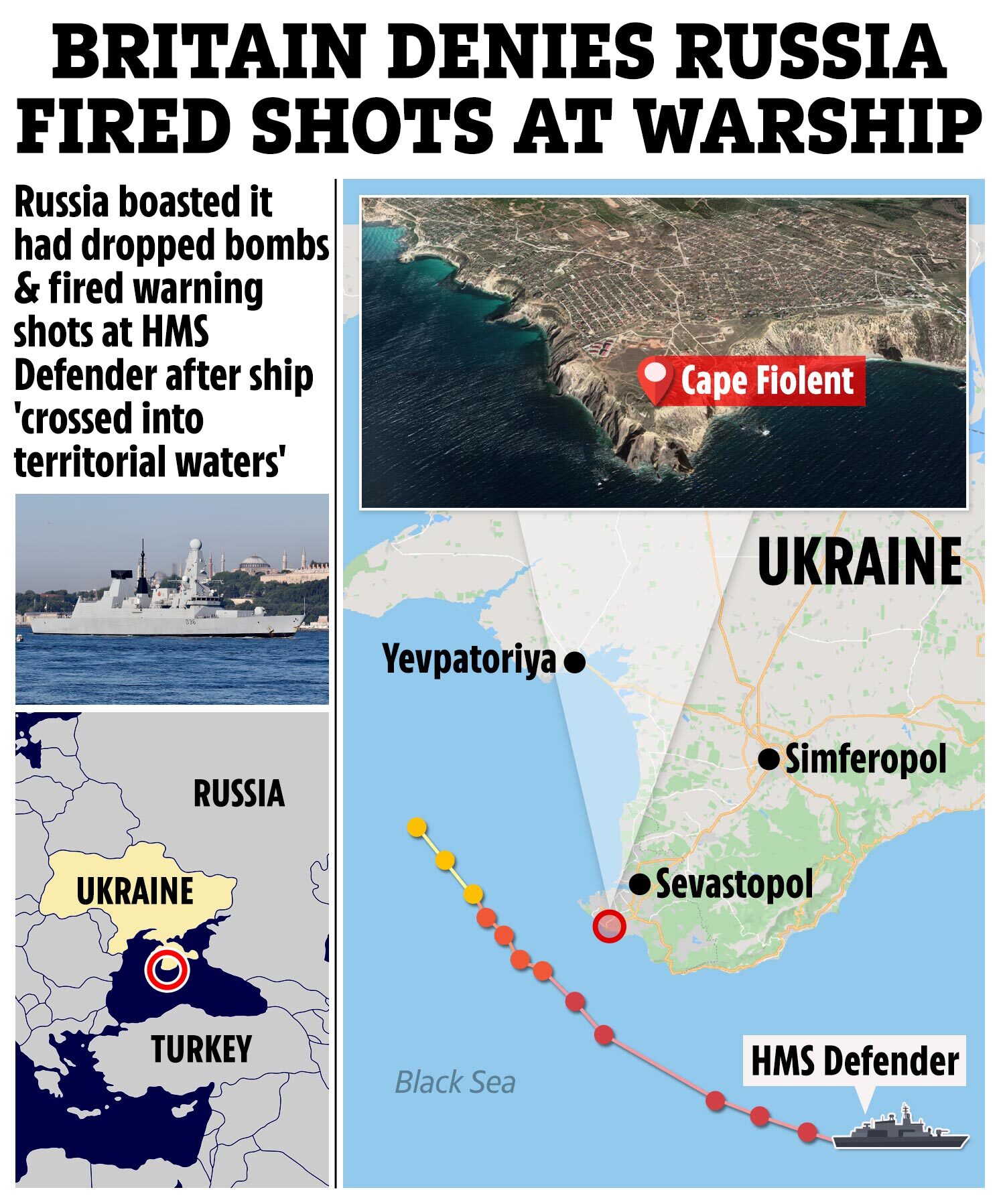 Mr Beale added that Russia had also tried to "make a manoeuvre to make sure that HMS Defender altered course but HMS Defender continued down that recognised shipping lane inside Crimean territorial waters, within 12 miles of the coast".

He said: "It is now out into international waters but Russian jets are still buzzing this Royal Navy warship as we progress now on the next part of the journey towards Georgia."