In hot weather like this, don’t roast the lamb – sizzle up a BAAA-B-Q: BRIAN VINER’S tips on how to cook your entire Easter lunch on the barbie 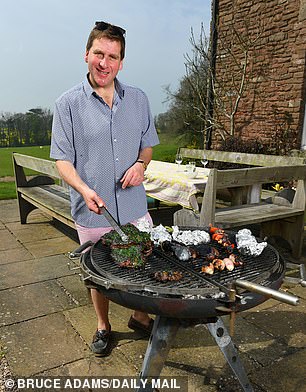 Brian Viner cooks the traditional Easter Sunday lunch, including lamb, veg and potatoes at his home in Herefordshire

Rome, Corfu, Morocco — take your pick. These are just some of the places we’re told will be cooler than most of Britain this Easter weekend.

My annual job early on Easter Sunday morning is to skulk around the garden hiding chocolate eggs for the children to find, a tradition that endures even now they’re all grown-up.

It’s a chilly task, normally. But tomorrow, with temperatures set to reach 23c across most of the country, I’ll be doing my Easter bunny act in a T-shirt and shorts, worried that, by the time the hunt is underway, the eggs might have melted in the sunshine.

The unseasonal heatwave has also brought about another unexpected development — the premature dusting down of the family barbecue.

Very occasionally, we’ve had the year’s first barbie over the May Bank Holiday. But Easter Sunday? Surely that’s crazy! Except that this year, it’s not. 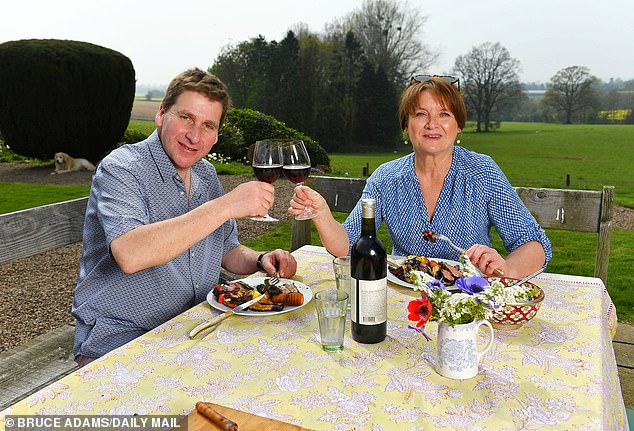 So why not make the most of the hottest Easter on record and barbecue your Easter lunch?

With a few minor tweaks, everything that normally ends up on the Easter Sunday dining table can be thrown on to the barbecue — especially the traditional centrepiece: the lamb.

So, stock up on charcoal, get out of the kitchen and throw a leg of lamb on the barbie, mate — with our indispensable guide to how you can cook your entire Easter lunch on the barbecue . . .

Quick trick for a luscious leg of lamb

As any cook will tell you, butterflying a leg of lamb — opening it out to increase the surface area — is the best way to barbecue it. This means it is not only easier to marinate, but it’s also quicker to cook, making it the perfect cut for the barbecue.

If you are doing it yourself, use a sharp knife to cut down the leg, exposing the bone. Take out the aitch bone at the top of the leg, then cut as closely as you can around the main thigh bone and pull it out, but don’t chuck it away. It will help make great stock later on, or, in our house, a huge treat for our dogs, Fergus and Finnegan.

The meat is then ready to fold out, like a book, or a butterfly with its wings open. 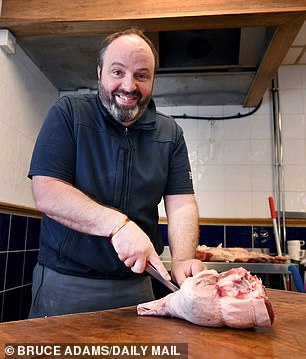 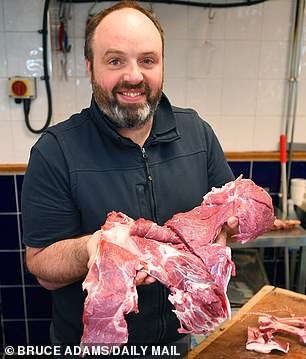 Butcher Anthony Legge,44, prepares the shoulder of lamb to be barbecued

If you are lucky enough to have a good butcher nearby — as I do in rural North Herefordshire — you can always ask them to butterfly the lamb for you.

My butcher is Anthony Legge, of Legges of Bromyard. The lamb he butterflied for me was born and reared on a farm no more than five miles away from his shop. It would have been ten or 11 months old when it was slaughtered.

Anthony believes that last season’s lamb has more flavour than very young spring lamb, which might be more tender, but hasn’t had the best part of a year munching happily on grass. I agree.

Add lashings of my herby marinade

Some people marinate meat before cooking, perhaps even a day or two before, to allow the flavours to soak in. But I prefer to apply the marinade in the last moments of cooking, then even more liberally while the meat is resting. This ensures that none of it burns off or becomes blackened and bitter over the fire, which garlic especially is wont to do. 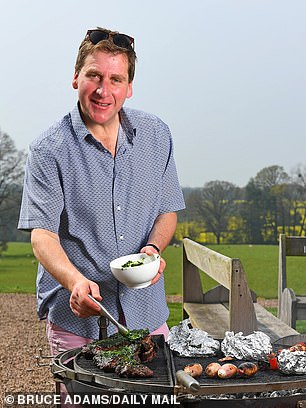 We happen to have oodles of wild garlic growing at the bottom of our garden, so I picked a trugful of that and whizzed it up with a glug of rapeseed oil (which has a higher burning point than olive oil). I call it my trug-and-glug special.

I also added some flat-leaf parsley, which takes the bitterness out of the garlic leaves. It made a rich, green, gloopy marinade which went beautifully with the meat and didn’t overpower its flavour.

The lamb, which weighed about 6 lb (2.75 kg), was slapped on the grill naked, without any oil. I cooked it for about 40 minutes, turning regularly, and, of course, the fatty side generated impressive flames.

I didn’t want the meat to spend too long in that heat intensity, but the aim was to get it charred on the outside while still very slightly pink within. A 20-minute rest helped that process.

And, although I say it myself, it was sublime.

Perfect partner for spuds and parsnips

rosemary goes wonderfully with lamb, and similarly well with parsnips and spuds.

I quartered half a dozen roasting potatoes, sloshed them with olive oil, a copious amount of sea salt, added several sprigs of rosemary and started it all off in the hotter top oven of my Aga.

I did the same with a packet of baby parsnips, but left them whole.

After 25 minutes in the top of the Aga — equivalent to about 220c or gas mark 7 — I transferred them to the barbecue, wrapped in tin-foil parcels so as not to let any of the oil leak out and start an inferno.

After 20 minutes inside their cocoons on the grill, they were perfection — crisp on the outside and soft within.

We live fairly close to the Vale of Evesham, the spiritual homeland of fine English asparagus.

There are quite a few asparagus farms even closer to us, just the other side of the Worcestershire border, which is why, at this time of year, it rather breaks my heart to find our local supermarket selling asparagus from Mexico.

We have a rule in our house that we eat asparagus only during its traditional English season, which is said to be between St George’s Day, on April 23, and the end of Royal Ascot in late June, but when I saw some early English spears at my butcher’s, I pounced.

For the barbecue, I brushed two bundles with olive oil, added some salt and plonked them straight on the grill for ten minutes, keeping them away from the hottest part but allowing them to char slightly.

My favourite way of eating asparagus will always be steamed, with melted butter or hollandaise sauce, but it’s great on the barbie. 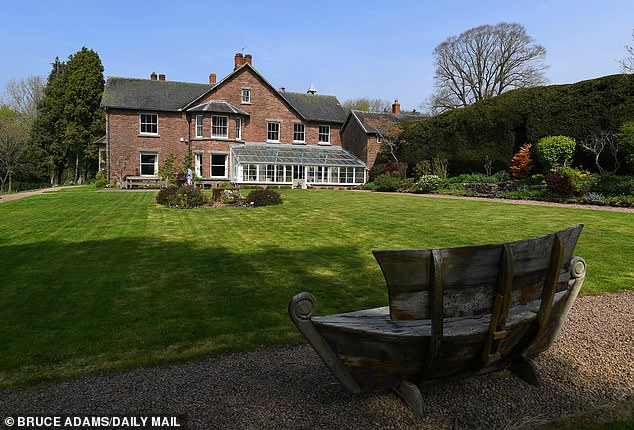 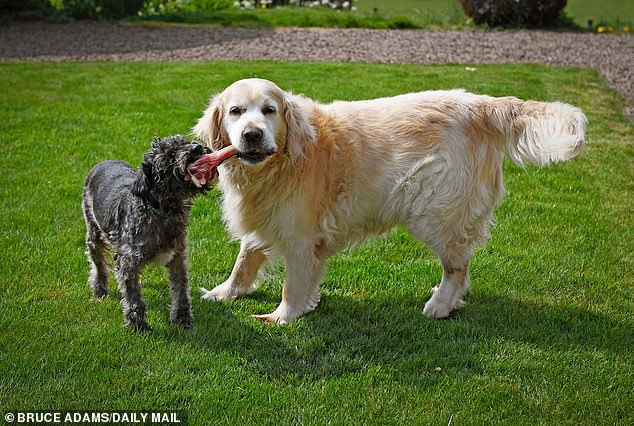 Snoodle and Golden Retriever dog fight over a sheep bone, saved by the butcher, at Brian Viner’s home in Herefordshire

Get crafty with your CARROTS

If you can’t countenance the idea of Easter Sunday without carrots, here’s a good way to do them on the grill.

You might have heard of Hasselback potatoes, said to have originated in the Hasselbacken restaurant in Stockholm, Sweden, in the early Fifties.

You cut as many thin slices as you can into a potato, but only going three-quarters through. Then you can drizzle over olive oil or push bay leaves or other herbs into the slits — it’s a lovely way of baking spuds.

The same principle applies to carrots. I cut slits into two large carrots, drizzled honey over them until they were well coated, then added plenty of salt and a generous sprinkling of cumin seeds.

I gave these a ten-minute burst in the top of the Aga, where the honey began to caramelise the carrots, then wrapped them in foil and sat them for 20 more minutes on the barbecue. Delicious.

I confess to adapting this recipe from the Saga website; maybe it appeals to older people because it softens the shallots and makes them easy to eat. Anyway, it really couldn’t be simpler.

Just splash some large shallots with olive oil, sprinkle generously with thyme leaves, add one clove of garlic for every two shallots, and wrap in foil.

Leave this on the grill until the shallots are really soft and have absorbed all the garlic and thyme flavours.

They go best with beef, but are terrific with lamb, too.

Kebab that will please the veggies 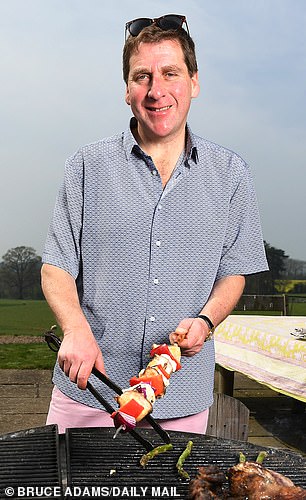 Brian makes up a veggie skewer with halloumi and pepper

A barbecue without a kebab is like Easter without an egg.

I cut some wedges of red onion and Portobello mushrooms, some slabs of red pepper and Greek-Cypriot halloumi cheese, and interspersed them on a large skewer, brushing lightly with olive oil.

The halloumi is the fiddly bit because the slices can split, but it’s perfect for grilling (or frying) because it doesn’t melt.

The skewer went straight on the barbecue and I kept turning it until it was gently, but evenly, charred all the way along — which also meant that once I’d pushed everything on to the plate, we weren’t sure, without looking carefully, whether we were about to eat cheese, onion, mushroom or pepper. Maybe not everyone’s idea of fun, but I like a surprise.

Heavenly flavour of the middle east

The traditional Easter Sunday vegetables, such as peas and carrots, might not lend themselves to grilling, but Mediterranean vegetables on the barbecue is a match made in heaven.

And given the popularity of lamb in countries such as Turkey and Lebanon, it’s no surprise the meat goes wonderfully with their great aubergine dish, baba ganoush.

My wife, Jane, is a whizz at this, so I handed over to her once I’d prepared two smallish aubergines on the barbecue.

They went straight on the grill, where I allowed them to blacken and burn. I put them aside to cool, before Jane peeled them and mashed up the insides with a slosh of extra-virgin olive oil, a tablespoon of ground cumin, lots of salt and pepper, and two tablespoons of Greek yoghurt, which, apart from anything else, brightens it up.

Some recipes insist on adding tahini, a sesame-seed paste, and/or garlic, but that’s not how Jane does it and it couldn’t be lovelier — a real taste of sunshine. Happy Easter! 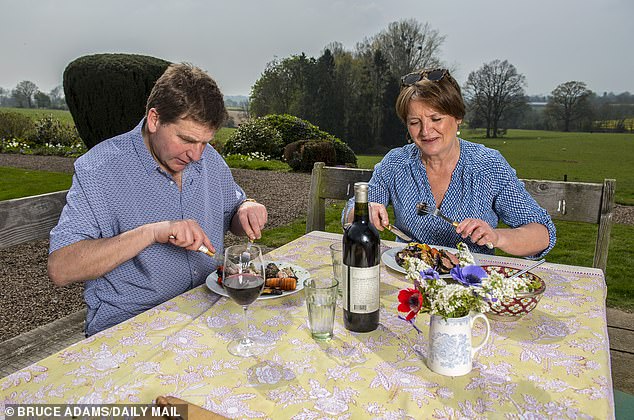 Dinner is served! With weather like this Easter BBQs may become a permanent feature