From Brexit talks in ‘The Tunnel’ to Super Saturday and a bid to force a referendum: How an explosive fortnight in politics could develop

The Brexit process has already undergone a bewildering array of twists and turns – but the drama is set to intensify again over the coming fortnight.

Hopes of a deal had seemed dead, but were abruptly revived yesterday in a three-hour face-to-face showdown between Boris Johnson and Irish PM Leo Varadkar.

However, there is still a long way to go before the crisis is brought to a conclusion.

Here is how the situation could develop as the country careers towards an election, either before or after it leaves the EU.

What has happened today?

They have agreed that negotiations can go into ‘the tunnel’. That is the intensive, secret phase of talks where the teams have settled the main issues in principle and are trying to thrash out a joint legal text.

In theory we should not now hear much from either side until they emerge to present the finished article.

A waypointer on progress could come on Sunday, when German Chancellor Angela Merkel and French president Emmanuel Macron are due to meet for dinner. 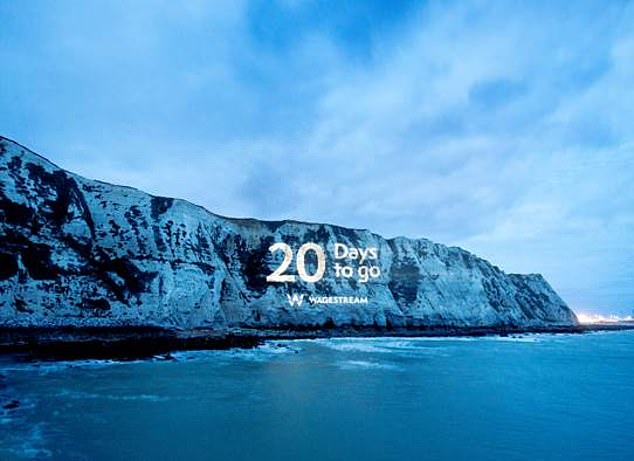 An image was projected on the cliffs of Dover today highlighting the countdown to October 31, when the UK is due to leave the EU

When will we know if they have been successful?

Parliament is due to return for the Queen’s Speech on Monday, with all the usual pomp and ceremony.

Boris Johnson will have been carefully assessing whether the emerging new package can keep his fragile political coalition together and get a Commons majority – with all eyes on the views of the DUP.

In Brussels on Monday, the EU will ‘take stock’ of progress with Mr Barnier over whether the legal text meets their criteria and can be put before leaders for approval.

Are there any more hurdles once the legal text is thrashed out?

A final deal would be put before EU leaders for approval at a summit in Brussels on October 17-18.

There would then be a make-or-break vote in the Commons on October 19 – which is set to be the first time Parliament has sat on a Saturday since the Falklands War.

If passed by the Commons, the government will start rushing legislation through Parliament immediately. Once the necessary laws are in place, an election will almost certainly be called.

How about if the ‘tunnel’ collapses?

If the talks have broken down, expect Mr Johnson either to boycott the EU summit, or stage a dramatic walkout saying he wants to leave with No Deal at Halloween.

But EU leaders could still offer an extension, in the hope that an election or referendum will change the balance.

If there is no Brexit deal by October 19, Remainer legislation obliges the PM to beg the EU for an extension until at least January.

Mr Johnson is likely to force a vote to make MPs ‘own’ any delay, having said he would rather ‘die in a ditch’ than accept one.

He could also try to find a loophole in the rebel law, although few people believe there is one.

Could the government stagger on if the PM is forced to delay Brexit?

Once an extension is in place, Jeremy Corbyn has said he will finally let Mr Johnson trigger an election.

Monday October 21 would probably be the first day when a motion can be brought to a vote under the Fixed Term Parliaments Act, or a confidence vote can be held.

Legally there must be 25 working days between Parliament being dissolved and the election being held.

November 28 looks the favourite date, given they are traditionally held on Thursdays. Going the confidence vote route would delay things by another fortnight, as there is a ‘cooling off’ period where someone else could demonstrate they can put together a Commons majority and take over as PM.

Given the Parliamentary numbers and deep splits among opposition parties, this appears highly unlikely to happen.

If Mr Johnson wins he will push ahead with taking the UK out as quickly as possible, with or without a deal.

Mr Corbyn has said he will renegotiate a new deal within three months, and then hold a second referendum between that package and Remain.

Are Remainer MPs just going to let all this happen?

Many Labour MPs and a number of former Tory rebels want a ‘confirmatory’ referendum to be held before an election. They are plotting to try and call a vote on October 19, whether or not there is a deal.

If an amendment laying the ground for a national vote is passed, it would probably require a ‘unity’ government to follow the plan through.

But that could take months, and would leave the country essentially without a functional leadership.