‘A deal still hangs in the balance’: EU Brexit negotiator Michel Barnier warns ‘differences still persist’ in trade talks – as France complains he is being too GENEROUS to Britain

Britain and the EU are still at odds over a post-Brexit trade deal with less than a month to go until the deadline for an agreement, Brussels’ chief negotiator warned this morning.

Michel Barnier gave a downbeat assessment of the chances of the two sides completing a free trade agreement as he briefed ambassadors from the 27 member states.

Sources at the meeting said he confirmed they were still deadlocked in three main areas, believes to include state aid rules and fishing rights in UK waters after December 31.

It came amid reports that France is furious with Mr Barnier, the nation’s former fisheries minister, claiming he is being too generous to Britain in the talks.

Its fishing fleet would lose the most if they lost the right to catch in UK waters and last night president Emmanuel Macron said ‘The preservation of the activities of our fishermen in British waters is an essential condition’ of a Brexit deal. 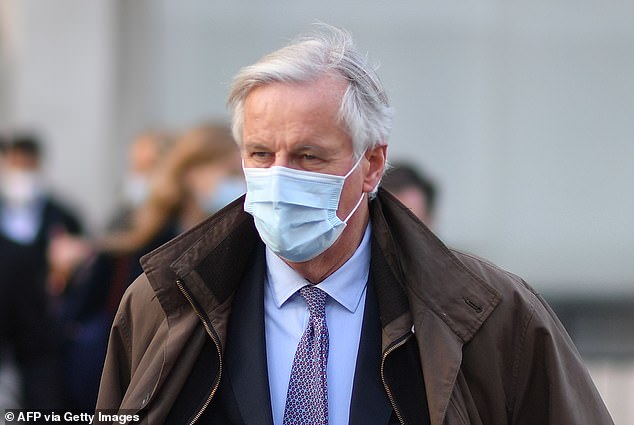 Michel Barnier gave a downbeat assessment of the chances of the two sides completing a free trade agreement as he briefed ambassadors from the 27 member states. 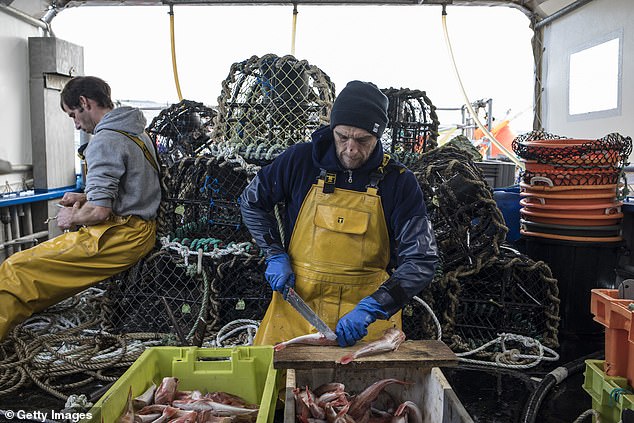 It came amid reports that France is furious with Mr Barnier, the nation’s former fisheries minister, claiming he is being too generous to Britain in the talks.

Channel crossings are at ‘risk of serious disruption and delay’ next month when the Brexit transition period ends, MPs warned yesterday.

In a scathing assessment of the way ministers have planned for leaving the customs union, the Commons public accounts committee questioned the UK’s level of preparedness.

The cross-party MPs said, with just four weeks to go, they did not believe the necessary systems are in place whether or not a deal is reached with Brussels.

The MPs stated: ‘There are still significant risks to the country being ready for the end of the transition period on December 31, 2020, but Government still only seems to be taking limited responsibility for that readiness.

‘Industry bodies have said that Government has not provided key information needed by businesses to prepare, such as detailed guidance on how to apply for simplified customs procedures.’

British and EU negotiators are continuing discussions in London on a post-Brexit trade deal. Cabinet Office minis- ter Michael Gove yesterday hit out at Brussels for trying to take the ‘lion’s share’ of British fish stocks as talks go ‘down to the wire’.

Mr Gove urged businesses to be ready for the deadline whether a last-minute deal is struck or not.

Mr Barnnie told the 27 national envoys to Brussels on Wednesday that differences in UK trade talks persisted, according to a senior EU diplomat who was present at the closed-door briefing.

‘Differences still persist on the three main issues,’ the diplomat said, when asked for the overall thrust of Barnier’s update to EU member states on the latest in Brexit trade talks.

‘A deal still hangs in the balance.’

The pound dipped below US$1.34 after the news emerged this morning.

And London-listed shares were muted as it  overshadowed news that the UK had become the world’s first country to approve the Pfizer-BioNTech Covid-19 vaccine.

The blue-chip FTSE 100 was flat and the mid-cap FTSE 250 down 0.4 per cent even as the government said the vaccine would be rolled out from early next week.

The FTSE 100 had rallied more than 12 per cent in November, marking its best month in 31 years, on optimism that a COVID-19 vaccine would soon be available.

Investor attention this week has squarely been on Brexit negotiations with only weeks left for Britain’s transition agreement to expire.

Yesterday, speaking at a joint Paris news conference with Belgian Prime Minister Alexander De Croo, Mr Macron gave a warning over attempts by the EU to seek a compromise on fishing right sin order to secure a deal before December 31.

‘Our two countries are among the most concerned by a Brexit we didn’t choose. We are particularly vigilant on the level playing field, today and in the future, and the question of fishing,’ he said.

‘The preservation of the activities of our fishermen in British waters is an essential condition, the fair rules of the market in the future are equal.

‘On the subject of Brexit our position has been constant – a deal must allow for a fair future relationship and France won’t accept a deal that doesn’t that doesn’t respect our interests in the future.’