The Pyramids as you’ve never seen them before: Breathtaking aerial footage taken from a paramotor shows ancient wonders in incredible detail

This is the breathtaking moment a man paramotors over the Pyramids of Giza – giving an incredible bird’s-eye view of the ancient structures.

The clip, filmed over the Egyptian city, captures Nicolas Aubert as he glides above the stunning set of pyramids in a thin layer of fog.

The professional paramotorist, from Malaga in Spain, passes inches from the top of the tallest structure, Pharaoh Khufu’s Great Pyramid, before circling back around another. 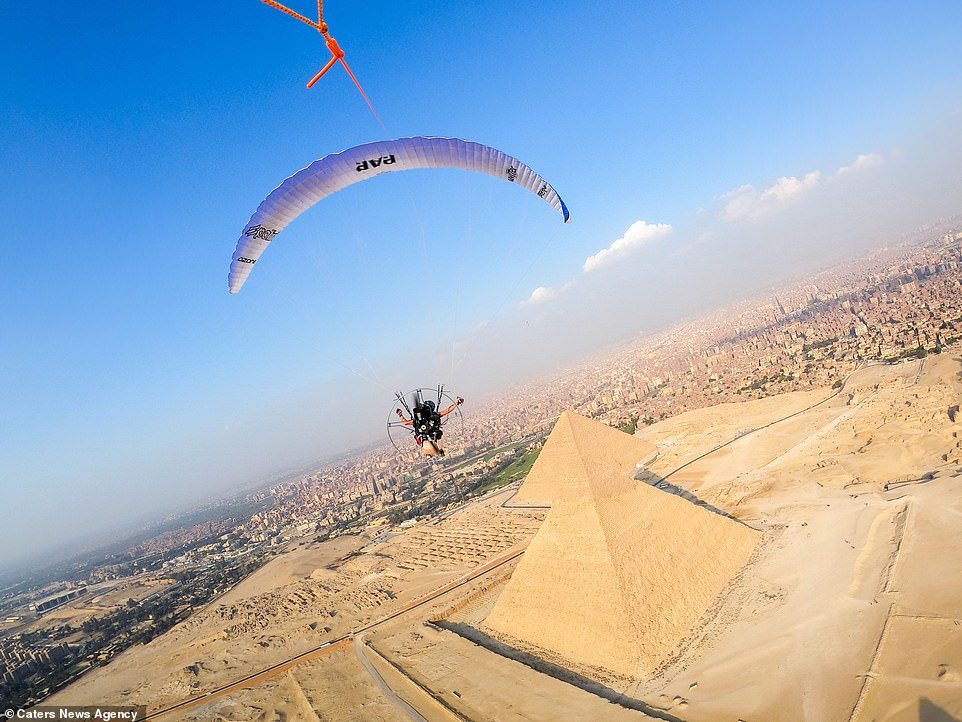 The clip, filmed over the Egyptian city, captures Nicolas Aubert as he glides above the stunning set of pyramids in a thin layer of fog

He then weaves in and out of the three monumental tombs – his paragliding wing swinging from side to side in the wind.

Mr Aubert then shows off the astonishing stonework of the ancient structures – including a fragmenting section at the very tip of the Great Pyramid.

He continues hovering over the tallest for a moment longer before gliding back to film a beautiful sunset over Giza.

The three pyramids were built by the Pharaohs Khufu, Khafre and Menkaure between 2550 and 2490 B.C. 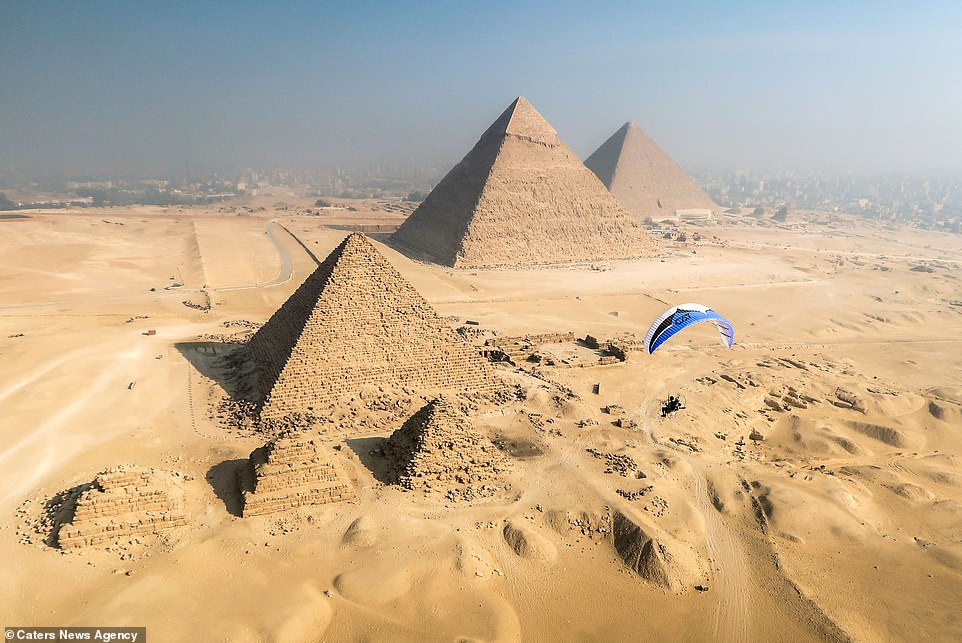 He approaches the three pyramids, completed between 2550 and 2490, while attached to a blue and white paragliding wing 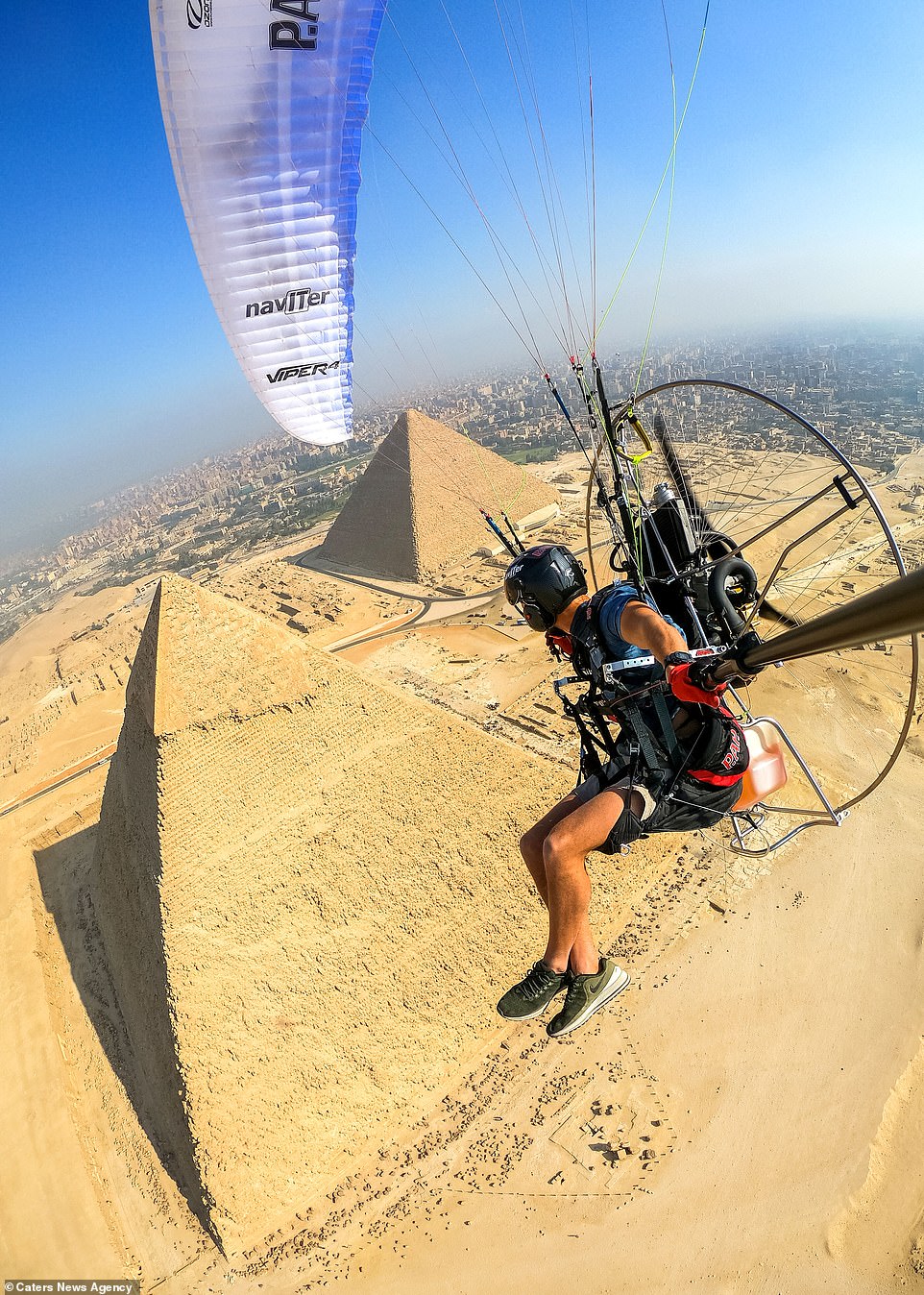 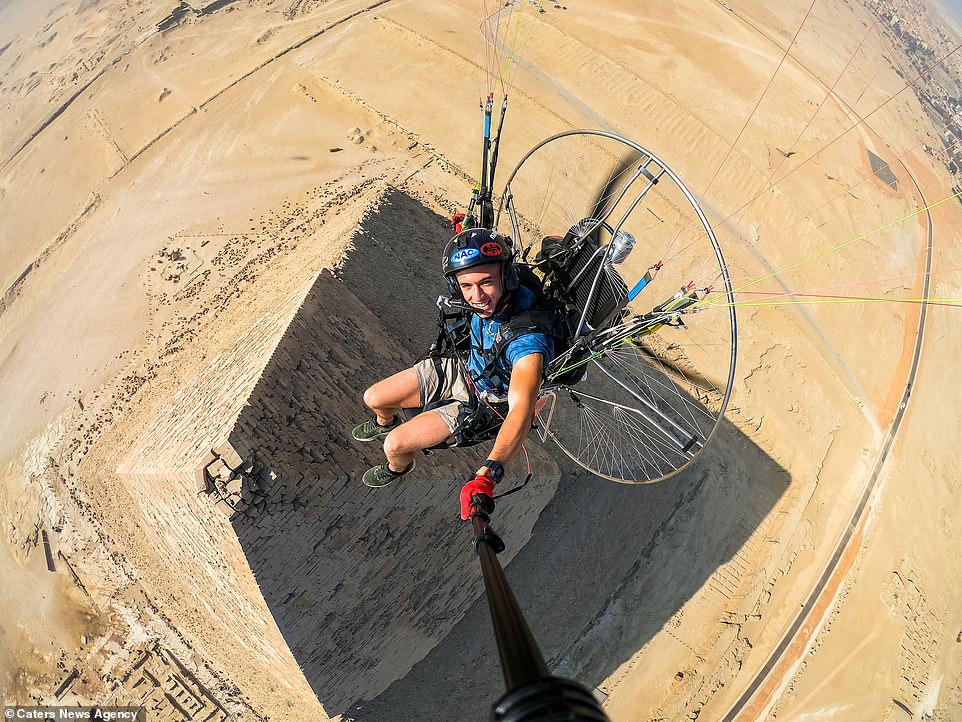 He then turns his camera to film himself above the ancient burial structure – which was completed in approximately 2550 B.C.

The tombs, the largest of which reaches 456 feet, were among the tallest man-made structures in the world for more than 3,800 years – before the 482-foot Lincoln Cathedral was built in 1312.

It is believed the Great Pyramid consists of at least 2.3million limestone and granite blocks – each weighing between 2.5 and 15 tons.

Giza’s second-tallest pyramid was built by Khufu’s son Pharaoh Khafre alongside the Great Sphinx of Giza in around 2520 B.C.

Construction was then completed on a third, much smaller structure on behalf of Pharoah Menkaure just 30 years later. This complex necropolis stands at 200 feet tall. 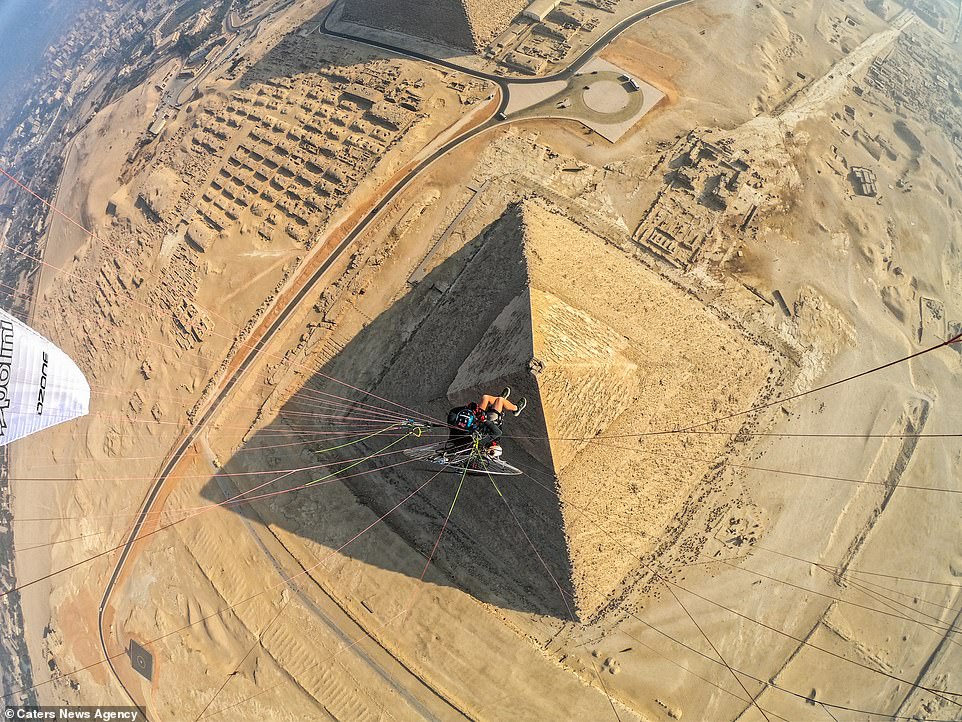 Mr Aubert, who competes professionally in paramotor championships, glides across the top of the Great Pyramid 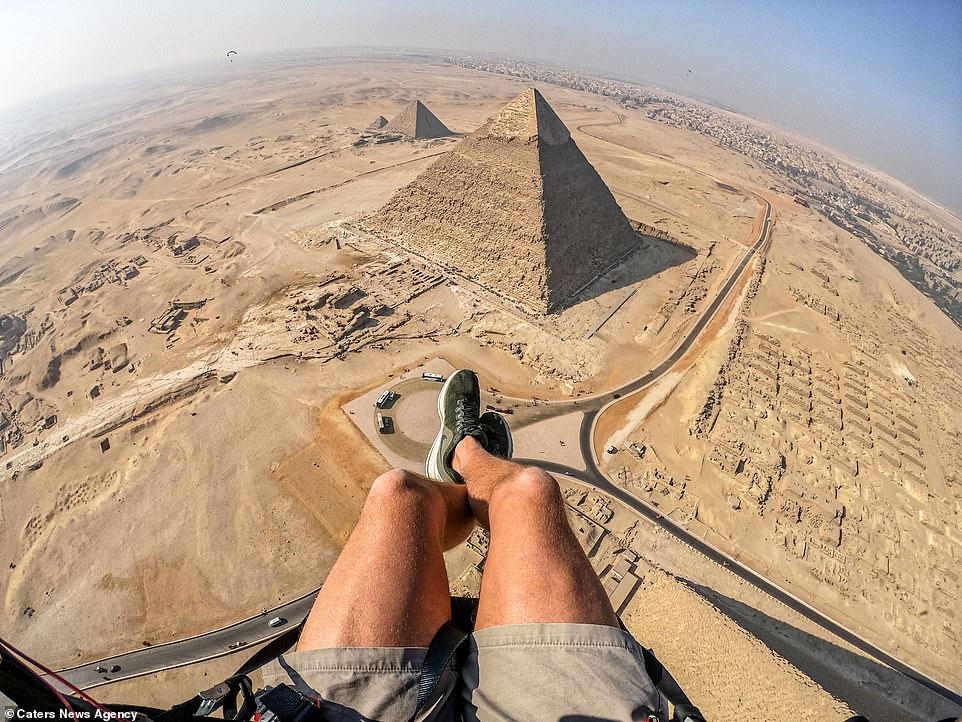 The 21-year-old swings his legs forward as he approaches the ancient structures, a pyramid built by Pharaoh Khafre seen underneath him

The 4,500-year-old structures were created to house the Pharaohs after their deaths, alongside jewels, weapons, wine and other objects they wished to bring with them to the afterlife.

It is believed thousands of highly skilled workers were enlisted to construct the pyramids – all of whom lived in a temporary city near the site.

But modern scientists have still yet to uncover exactly how these impressive structures were built.

Having started gliding at the age of seven, Mr Aubert, 21, now competes internationally as well as participating in exhibitions across the globe. 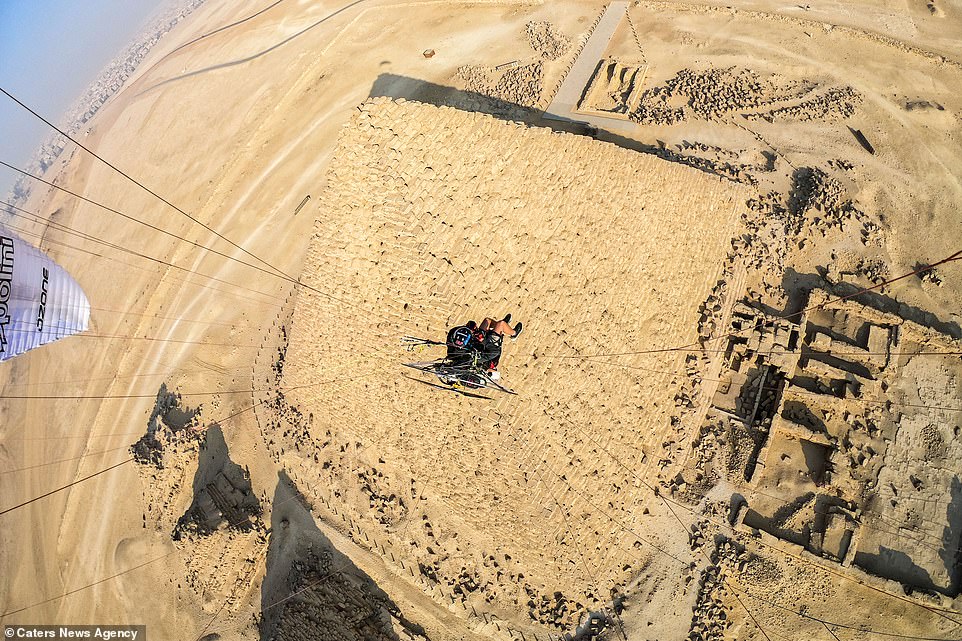 He then circles around the other monumental tombs, showing the beautiful and intricate stonework in incredible detail 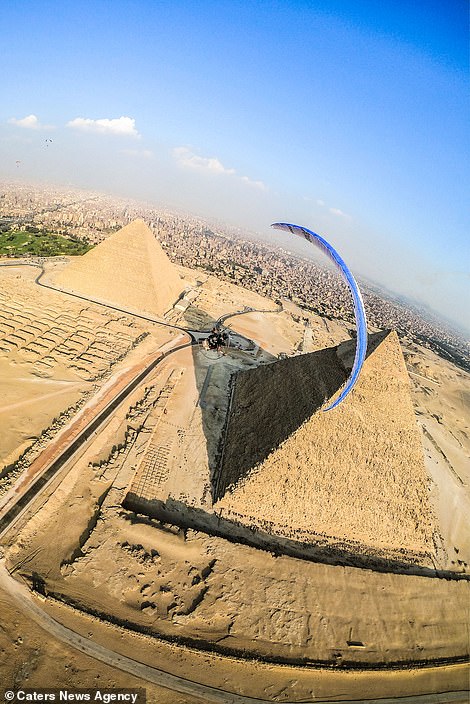 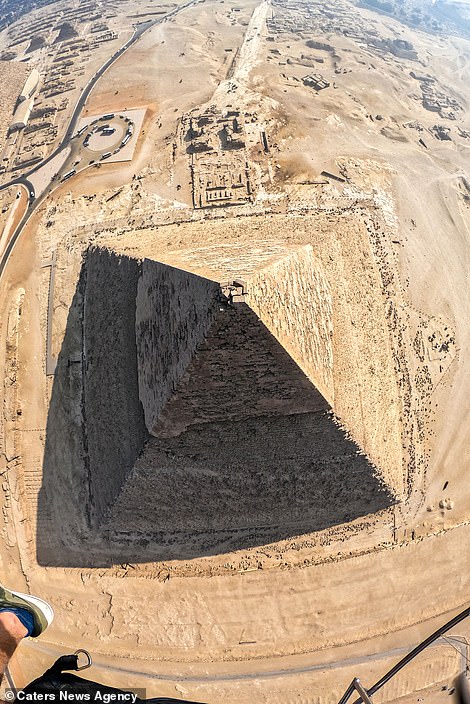 Speaking about the stunning clip, he said: ‘Freedom is one of the words to describe how I feel when flying.’

A paramotor, or powered paraglider, consists of a harness, engine and propeller connected to a pilot’s back in a hoop frame.

The frame is then covered in netting to protect the pilot – who is also attached to a paragliding wing. 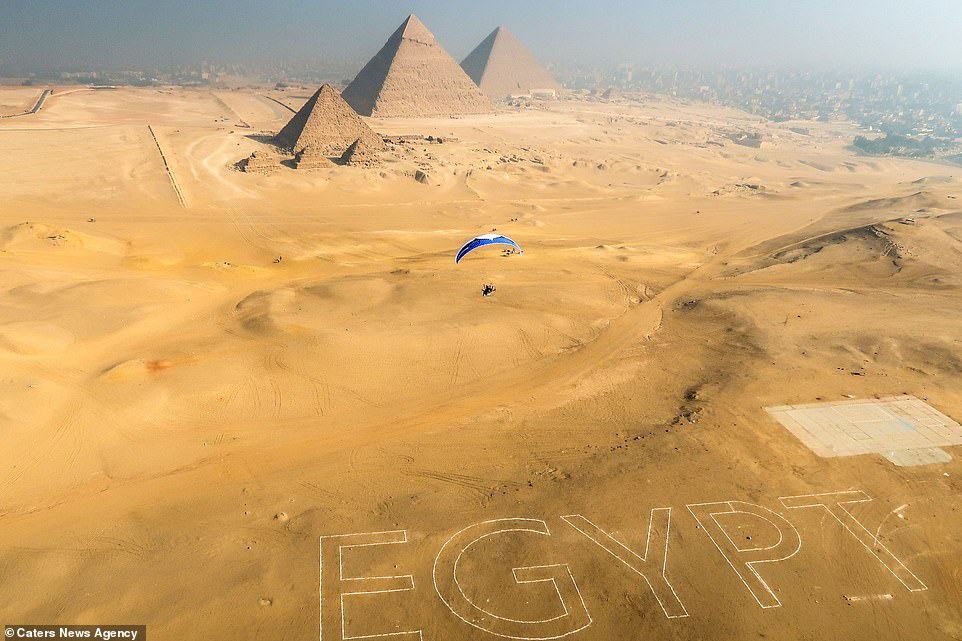