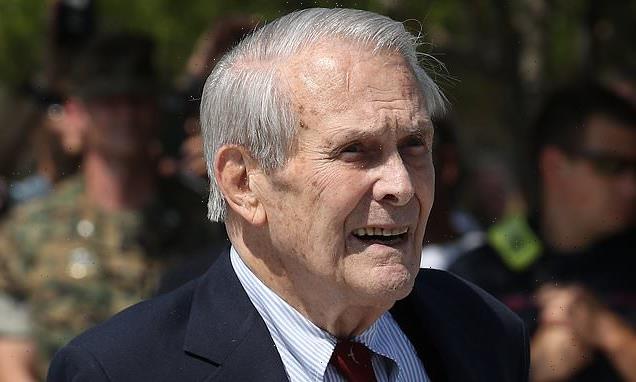 Former defense secretary Donald Rumsfeld dies aged 88: Architect of the Iraq war who served under Bush and Ford passes away ‘surrounded by family in New Mexico’

Former Defense Secretary Donald Rumsfeld has died at the age of 88.

Rumsfeld served as Defense Secretary under Gerald Ford and George Bush and was central to the plans involving the invasion into Iraq and Afghanistan.

He died in Taos, New Mexico, according to his family.

The Princeton-educated Rumsfeld drew global attention for his televised briefings during the Iraq War, as when he spoke about weapons of mass destruction in 2002.

Before the 2016 election, he told DailyMail.com he intended to vote for Donald Trump, even as many members of the defense and political establishment broke away from the real estate mogul and reality TV star.

Rumsfeld said it was ‘not a close call.’

But days before the Capitol riot, he joined other living Defense Secretaries in signing an op-ed in the Washington Post warning against involving the military in an election dispute.

‘Each of us swore an oath to support and defend the Constitution against all enemies, foreign and domestic. We did not swear it to an individual or a party,’ Rumsfeld and the other former Defense secretaries wrote.

‘Efforts to involve the U.S. armed forces in resolving election disputes would take us into dangerous, unlawful and unconstitutional territory. Civilian and military officials who direct or carry out such measures would be accountable, including potentially facing criminal penalties, for the grave consequences of their actions on our republic.’

Rumsfeld’s family mourned him in a statement. ‘It is with deep sadness that we share the news of the passing of Donald Rumsfeld, an American statesman and devoted husband, father, grandfather and great father,’ the family wrote. ‘At 88 he was surrounded by family in his beloved Taos, New Mexico.’

‘History may remember him for his extraordinary accomplishments over six decades or public service, but for those who knew him best and whose lives were forever changed as a result, we will remember his unwavering love for his wife Joyce, his family and friends, and the integrity he brought to a life dedicated to country.’