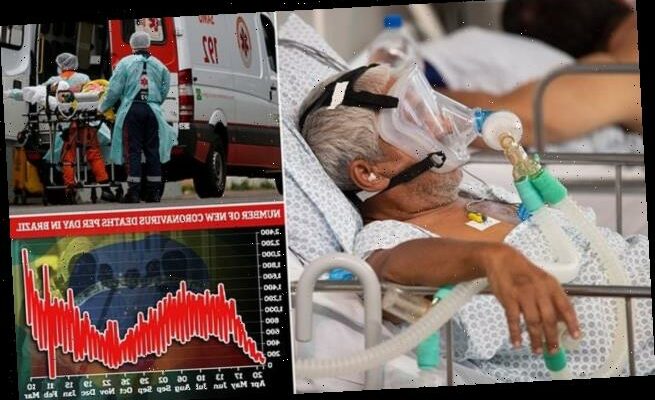 Brazil sees more than 2,000 Covid-19 deaths in a day as governor warns patients face ‘dying without medical assistance’ because country’s hospitals are over-run

Brazil yesterday recorded more than 2,000 Covid-19 deaths, its worst single-day toll, as the country’s hospitals have been over-run by the world’s worst infection-rate.

While President Jair Bolsonaro resists desperate calls from governors to impose lockdown rules, doctors are being forced to triage patients like they are in a war zone.

‘We have reached the limit across Brazil; rare are the exceptions,’ Dias, who leads the governors’ Covid forum, said. ‘The chance of dying without assistance is real.’

There were 2,286 Covid deaths on Wednesday and nearly 70,000 new cases in Latin America’s most populous country which, over the last seven days, has ranked as the most deadly and most infectious in the world. 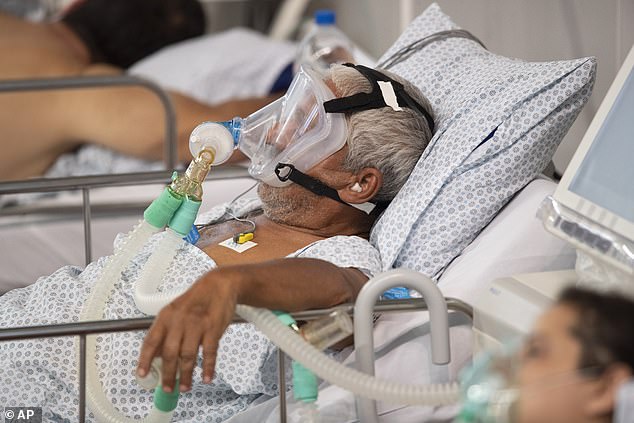 COVID-19 patients lie at a field hospital set inside a sports coliseum in Santo Andre, on the outskirts of Sao Paulo, Brazil, last week. In Brazil’s wealthiest state, Sao Paulo, at least 30 patients died this month while waiting for ICU beds 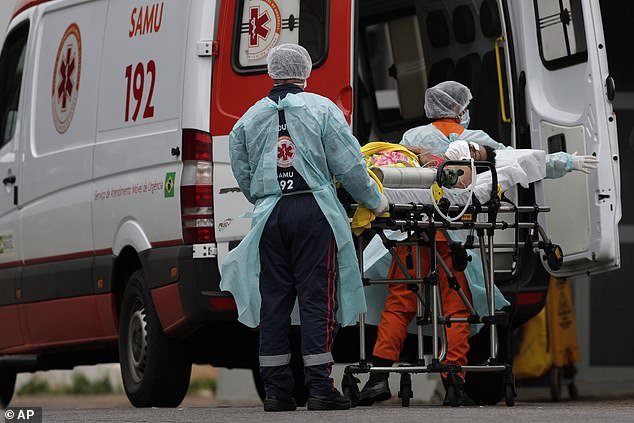 Healthcare workers receive a patient suspected of having COVID-19 at the public HRAN Hospital in Brasilia, Brazil, Monday 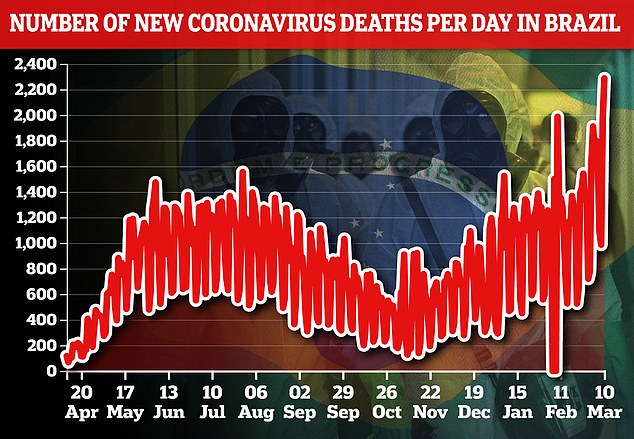 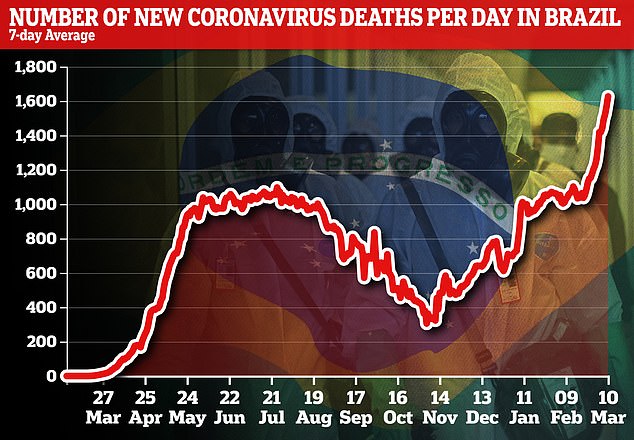 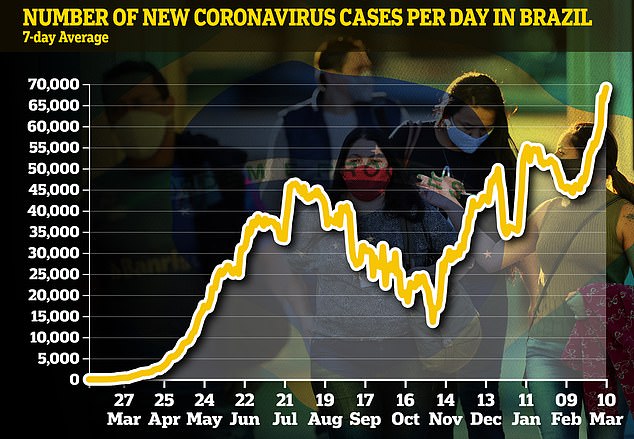 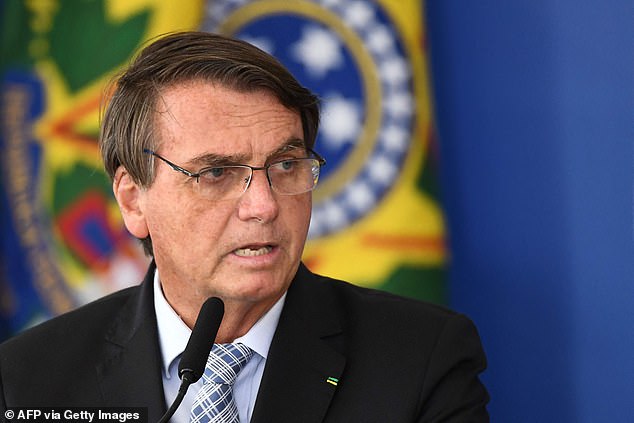 Brazilian President Jair Bolsonaro speaks at the Planalto Palace in Brasilia on Thursday. He has been resisting calls from governors to impose new lockdown rules

For the last week, Brazilian governors sought to do something President Jair Bolsonaro obstinately rejects: cobble together a proposal for states to help curb the nation’s deadliest COVID-19 outbreak yet.

The effort was expected to include a curfew, prohibition of crowded events and limits on the hours non-essential services can operate.

The final product, presented Wednesday, was a one-page document that included general support for restricting activity but without any specific measures.

In southern Santa Catarina state, 419 people are waiting for transfer to ICU beds. In neigh boring Rio Grande do Sul, ICU capacity is at 106 per cent.

Alexandre Zavascki, a doctor in Rio Grande do Sul’s capital Porto Alegre, described a constant arrival of hospital patients who struggle to breathe.

‘I have a lot of colleagues who, at times, stop to cry. This isn’t medicine we’re used to performing routinely. This is medicine adapted for a war scenario,’ said Zavascki, who oversees infectious disease treatment at a private hospital.

‘We see a good part of the population refusing to see what’s happening, resisting the facts. Those people could be next to step inside the hospital and will want beds. But there won’t be one.’

Over the president’s objections, the Supreme Court last year upheld cities’ and states’ jurisdiction to impose restrictions on activity.

Even so, Bolsonaro consistently condemned their moves, saying the economy needed to keep churning and that isolation would cause depression.

Measures were relaxed toward the end of 2020, as COVID-19 cases and deaths ebbed, municipal election campaigns kicked off and home-bound Brazilians grew fatigued by quarantine.

The most recent surge is driven by the P1 variant, which Brazil’s health minister said last month is three times as transmissible as the original strain.

It first became dominant in the Amazonian city Manaus and in January forced the airlift of hundreds of patients to other states. 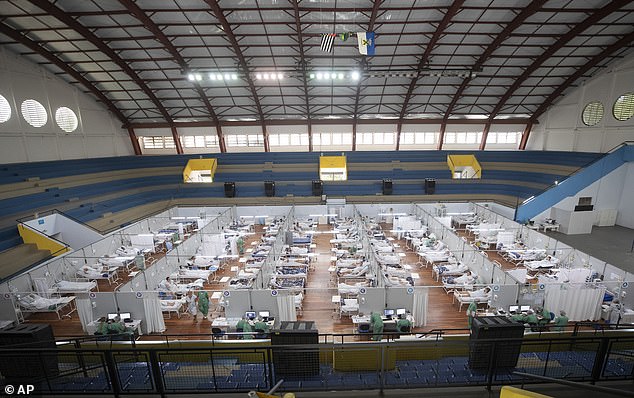 COVID-19 patients lie on beds at a field hospital set inside a sports coliseum in Santo Andre, on the outskirts of Sao Paulo on March 4 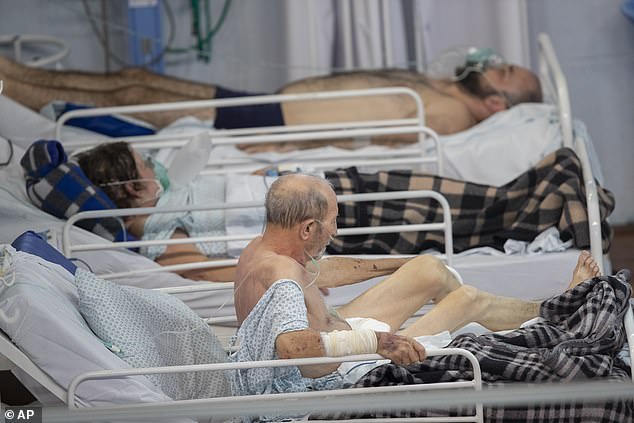 COVID-19 patients lie on beds in a field hospital built inside a gym in Santo Andre, on the outskirts of Sao Paulo, Brazil, Thursday, March 4 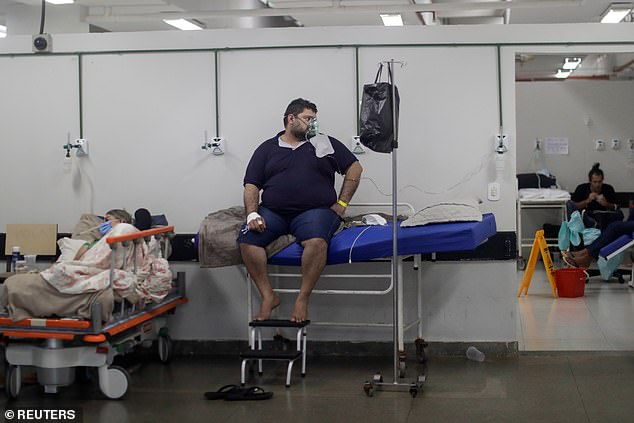 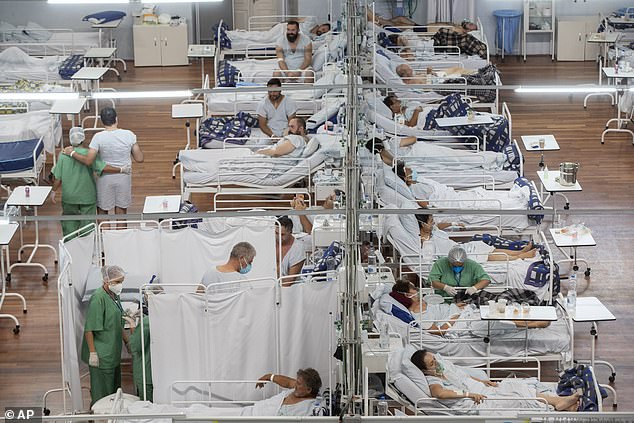 COVID-19 patients lie on beds at a field hospital built inside a sports coliseum in Santo Andre, Brazil, on the outskirts of Sao Paulo, on Thursday, March 4

Brazil’s failure to arrest the virus’ spread since then is increasingly seen as a concern not just for Latin American neighbours, but also as a warning to the world, Tedros Adhanom Ghebreyesus, director of the World Health Organisation, said in a March 5 press briefing.

‘In the whole country, aggressive use of the public health measures, social measures, will be very, very crucial,’ he said. ‘Without doing things to impact transmission or suppress the virus, I don’t think we will be able in Brazil to have the declining trend.’

COUNTRIES REPORTING THE MOST CASES:

COUNTRIES REPORTING THE MOST DEATHS:

Last week’s tally of more than 10,000 deaths was Brazil’s highest since the pandemic began, and this week’s toll is on track to be even greater after the country posted nearly 2,300 deaths on Wednesday – blowing away the prior day’s total that was also a record.

‘Governors, like a lot of the population, are getting fed up with all this inaction,’ said Margareth Dalcolmo, a prominent pulmonologist at the state-run Fiocruz Institute.

She added that their proposed pact is vague and will remain symbolic unless it becomes far-reaching and confronts the federal government.

Brazil’s national council of state health secretaries last week called for the establishment of a national curfew and lockdown in regions that are approaching maximum hospital capacity. Bolsonaro again demurred.

‘I won’t decree it,’ Bolsonaro said Monday at an event. ‘And you can be sure of one thing: My army will not go to the street to oblige the people to stay home.’

Restrictions can already be found just outside the presidential palace after the Federal District’s governor, Ibaneis Rocha, implemented a curfew and partial lockdown.

Rocha warned Tuesday that he could clamp down harder, sparing only pharmacies and hospitals, if people keep disregarding rules. Currently, 213 people in the district are on the wait list for an ICU bed.

Bolsonaro told reporters Monday that the curfew is ‘an affront, inadmissible,’ and said that even the WHO believes lockdowns are inadequate because they disproportionately hurt the poor.

While the WHO acknowledges ‘profound negative effects,’ it says some countries have had no choice but to impose heavy-handed measures to slow transmission, and that governments must make the most of the extra time provided to test and trace cases, while caring for patients. 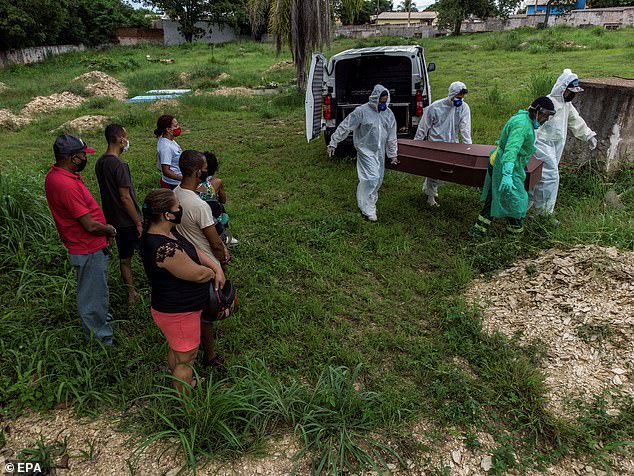 Relatives as they observe the burial of a 28-year-old young man who died from covid-19 in the Despraiado cemetery in Cuiaba, capital of Mato Grosso on Thursday 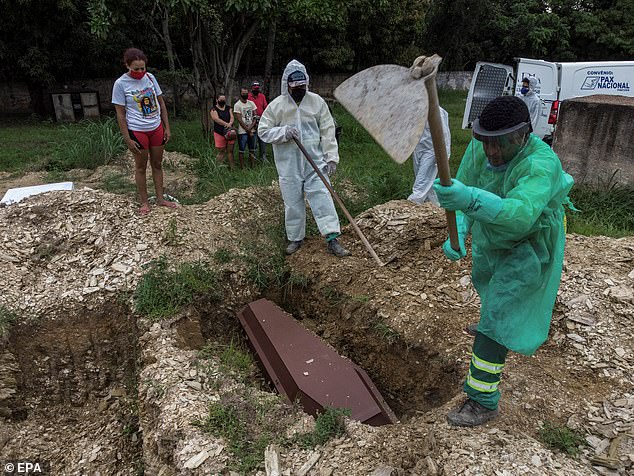 Relatives as they observe the burial of a 28-year-old young man who died from covid-19 in the Despraiado cemetery in Cuiaba, capital of Mato Grosso on Thursday

Such nuance was lost on Bolsonaro. His government continues its search for silver-bullet solutions that so far has served only to stoke false hopes. Any idea appears to warrant consideration, except the ones from public health experts.

Still, Bolsonaro endorsed the drugs. He has also supported treatment with two drugs for fighting parasites, neither of which have shown effectiveness.

He again touted their capacity to prevent hospitalisations during a Wednesday event in the presidential palace.

Bolsonaro also dispatched a committee to Israel this week to assess an unproven nasal spray that he has called ‘a miraculous product.’ Fiocruz’s Dalcolmo, whose younger sister is currently in an ICU, called the trip ‘really pathetic.’

Camila Romano, a researcher at the University of Sao Paulo’s Institute of Tropical Medicine, hopes a test her lab developed to identify worrisome variants, including P1, will help monitor and control their spread.

She also wants to see stricter government measures, and citizens doing their part.

‘Every day is a new surprise, a new variant, a city whose health system enters collapse,’ Romano said. ‘We’re now in the worst phase. Whether this will be the worst phase of all, unfortunately we don’t know what’s yet to come.’