A ‘trouble maker’ bull has sent his farmhands into fits of laughter after getting inside a hay ring and pulling all across his farm.

The huge animal sashayed around a field wearing a metal ring feeder to alert a farmer that he was hungry – despite being surrounded by plentiful lush green grass.

Kody Wordelman watched the hilarious scene unfold at his farm in Jamestown, Missouri, after searching for the missing feeder.

The full-time farmer watched open mouthed as the hefty balancer bull, known as ‘200’, strutted across the field sporting the metal ring in a bid to bag some extra hay.

200’s stubborness won through in the end however, as Kody was forced to release him from the feeder and satisfy his craving for the dried variety of grass.

Animal lover Kody, who documents his animals’ antics on social media, uploaded the video on Facebook where it has gone viral, racking up 2.9 million views.

Kody, 30, said: ‘In the spring, once the grass starts growing, we start feeding them less hay. 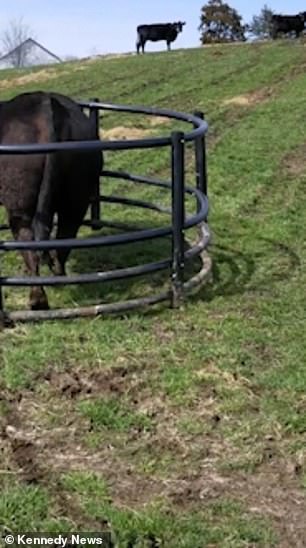 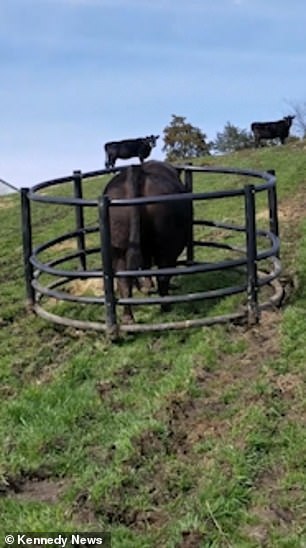 ‘He wasn’t satisfied with the fresh green grass so his solution was to start dragging the hay ring that we put hay bales in with him to let me know he wanted more.

‘My bulls are well known for causing me trouble, whether it’s tearing up fences or visiting the neighbours.

‘200’s a tame animal and will eat corn out of your hand but he does consistently cause trouble.

‘He’ll jump over a gate and ruin it just to be on the other side but if you call for him he will come right back and act like he didn’t do anything wrong.

‘This was a little more unusual incident and we got a good laugh out of it.’ 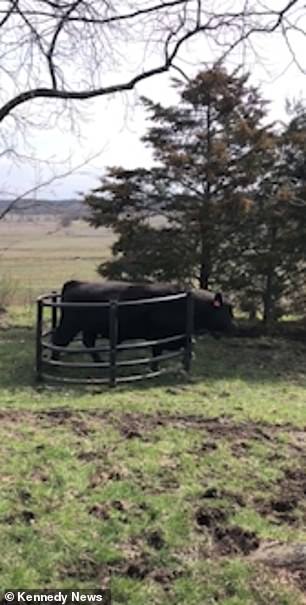 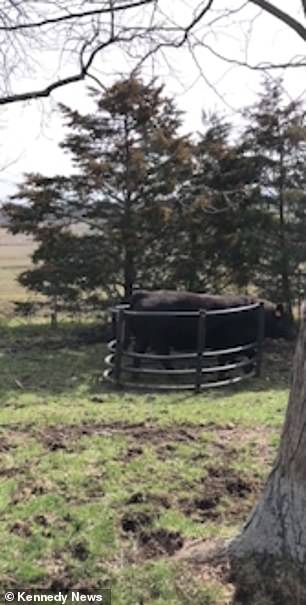 Kody Wordelman watched the hilarious scene unfold at his farm in Jamestown, Missouri after searching for the missing feeder

Farmer Kody said that people had responded in a positive way to the clip – once they realised he wasn’t trapped in a cage.

Kody, who raises corn, soybeans, hay and cattle, said: ‘Most people got a good laugh out of it.

‘On the farm you never know what’s going to happen but it’s a new adventure every day.

‘Before I started filming we’d actually gone out looking for the hay ring to put out more hay.

‘I assumed it rolled down the hill but as I was walking past I looked up and saw it bouncing my across the next ridge. I thought it was hilarious.’