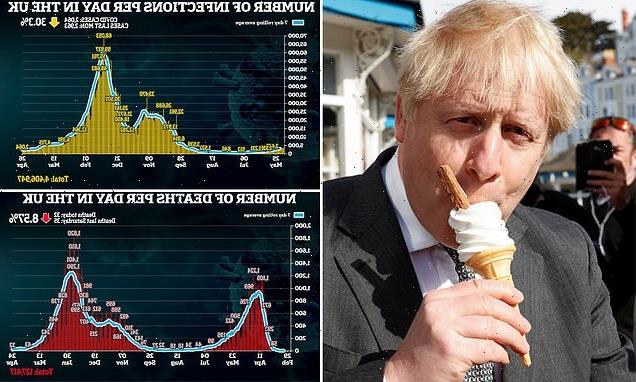 Boris Johnson has said there is a ‘very good chance’ the UK could see all Covid restrictions lifted on June 21 – but has warned the disease is not ‘totally licked’ yet.

The Prime Minister said while lockdowns meant the virus was now ‘under control’, ‘there probably will be another wave of the disease’.

But Mr Johnson said that coronavirus jabs would provide ‘pretty robust fortifications’ should there be another spike in infections going forward, as he hailed the UK’s vaccination programme.

He was confident that June 21 could see all restrictions on social contact lifted across the UK – meaning mass gatherings, full-capacity concerts and nightclubs would all open up again as planned.

The PM urged the public to take up the vaccine when offered it, with a Government campaign calling on people aged 50 and under to get their jab so the UK can ‘continue on the path back to normality’.

It comes as the Prime Minister denied saying he was prepared to let ‘bodies pile high’ rather than order another lockdown, amid a bitter briefing war that has hit Downing Street. 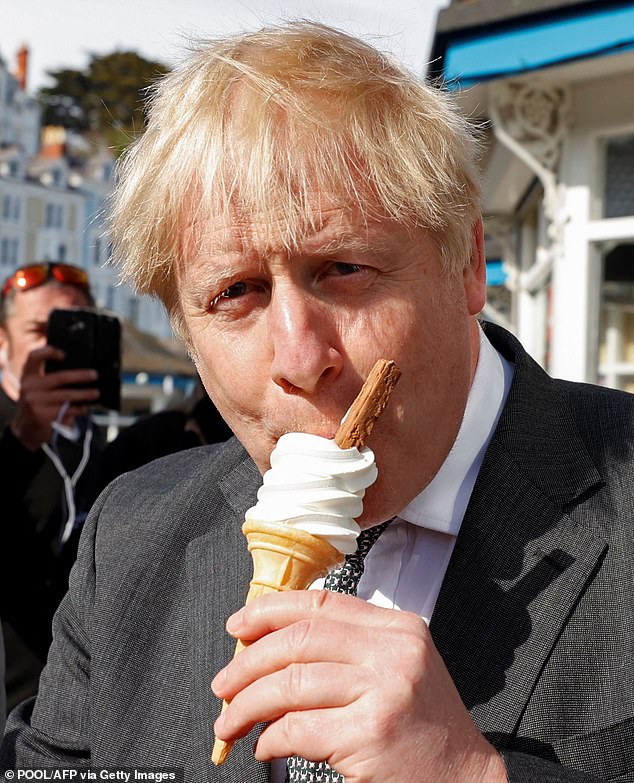 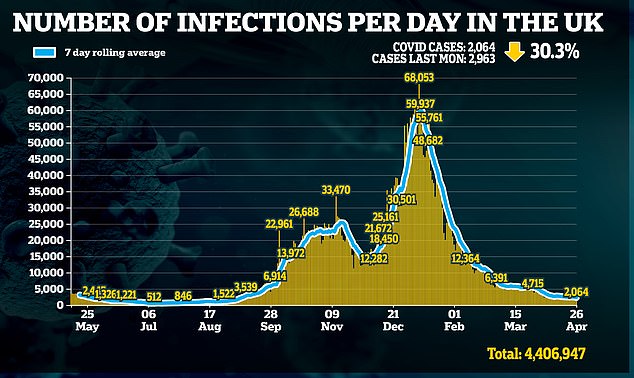 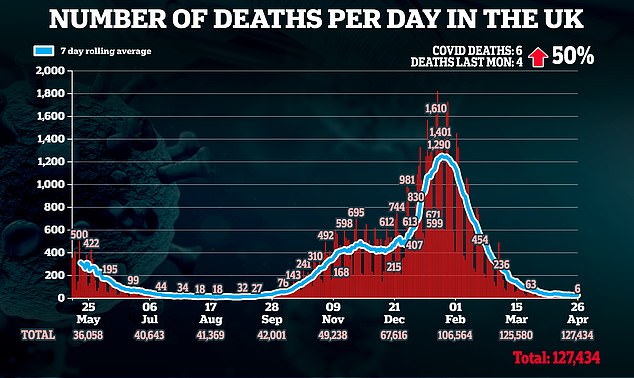 Covid deaths remained in single digits for the third day this month after another six were recorded. Although this was up on the same time last week, it was far below the darkest days of January when there were almost 1,000 fatalities a day

During a visit to Wrexham, when asked if he had made the comments attributed to him, Mr Johnson said: ‘No, but I think the important thing I think people want us to get on and do as a Government is to make sure that the lockdowns work.

‘They have, and I really pay tribute to the people of this country, this whole country of ours, that have really pulled together and, working with the vaccination programme, we have got the disease under control.

Boris Johnson told aides in September that he would rather let coronavirus ‘rip’ than impose another lockdown, it has been claimed.

The PM is said to have argued that there was no evidence lockdowns worked and dubbed them ‘mad’ during an intense debate.

According to the Times, Mr Johnson repeatedly made the ‘let it rip’ comments in this period and said further lockdown would cause businesses to close and people to lose their jobs.

The PM also apparently suggested regret over the first national lockdown and even compared himself to the mayor in the film Jaws who kept the beaches open despite the risk of shark attacks.

Mr Johnson has previously described the mayor as the ‘real hero’ of the film for resisting political pressure.

A No 10 spokesman said: ‘These are gross distortions of his position. Throughout this pandemic we’ve done everything we can to save lives and protect livelihoods.’

‘We have got to be realistic about that, unfortunately there probably will be another wave of the disease, but I think that the vaccination programme has now been so massive – 33.6 million people vaccinated.

‘We have built up what I think are some pretty robust fortifications against the next wave, we will have to see how strong they really are in due course.’

A Government campaign – called ‘every vaccination gives us hope’ – includes a TV advert which will showcase the health workers and volunteers involved in the vaccination rollout across the UK.

The campaign will predominantly be aimed at people under the age of 50 who will be offered their first dose, as well as the over-50s who are booked in for their second dose, to encourage vaccine uptake.

In England, people aged 44 are now being invited to book their jab, with NHS England saying around half-a-million 44-year-olds would receive a text inviting them to get their jab through the national booking service.

The push for people to take up jab offers comes as restrictions ease in Wales and Scotland and after figures over the weekend confirmed more than half of the UK’s total population had received a first dose of a Covid-19 vaccine.

Foreign Secretary Dominic Raab said the first UK medical supplies have arrived in India and they ‘will be deployed where they are needed most’.

He added: ‘No-one is safe until we are all safe. International collaboration is key to fighting this global threat.’

The Foreign, Commonwealth and Development Office said that nine plane-loads of life-saving kit – including ventilators and oxygen concentrators – have been sent to New Delhi.

The move follows discussions with India’s government following a devastating surge in Covid-19 cases which has overwhelmed the country’s health services.

Further consignments are due to be dispatched later this week, while part of the shipment of emergency medical supplies is 100 non-invasive breathing aids from University College London (UCL).

UCL said that its continuous positive airway pressure (CPAP) device had been used extensively throughout the pandemic and could prevent a significant proportion of people from needing mechanical ventilation.

In Wales, pubs, restaurants, cafes and other hospitality businesses were allowed to offer outdoor service again from Monday, with organised outdoor activities also permitted for up to 30 people. 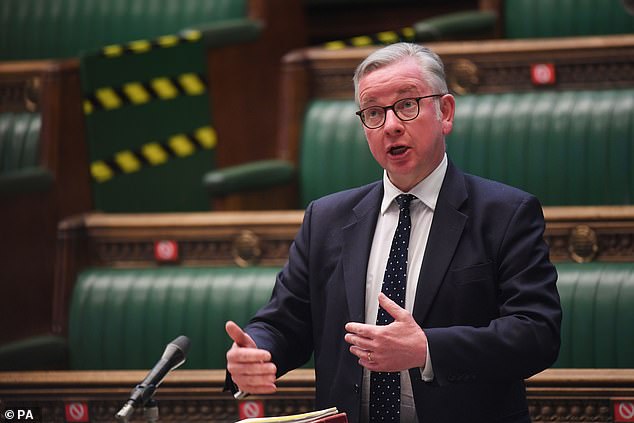 People would be able to meet others for a meal or drink, with up to six people from two households allowed to socialise indoors in a public place.

It follows reports that Mr Johnson was under siege last night as questions mounted over his personal conduct in a string of controversies.

Fresh sources came forward to confirm he had made a crass comment about lockdown deaths – even as he tried to deny it.

In a second blow, he was facing further questions about the lavish redecoration of his flat after it emerged that the Conservative Party settled a £58,000 bill last summer.

Whitehall sources suggested the Prime Minister, who has now paid the bill himself, may be forced to formally declare the loan over the coming days.

In a further setback it was revealed that he had texted Dominic Cummings last year to exonerate him over the notorious ‘chatty rat’ leak inquiry – undermining Downing Street’s claims that the former aide was behind a string of damaging disclosures. 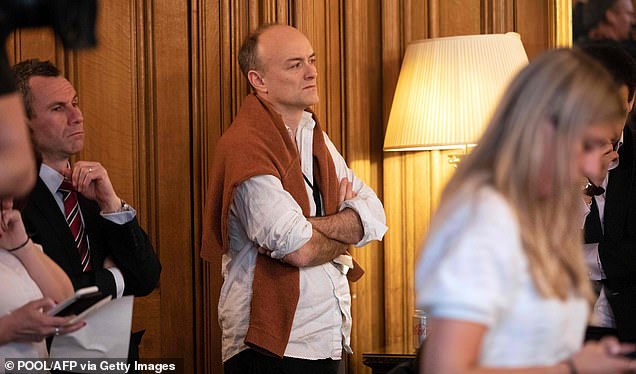 Ministers tried to play down yesterday’s explosive revelation in the Daily Mail that Mr Johnson had allegedly raged at officials that he would rather see ‘bodies pile high in their thousands’ than order a third lockdown.

But the Mail’s story was confirmed by both the BBC and ITV, citing their own sources.

In a terse denial yesterday, Mr Johnson said he had not uttered the words.

Asked if he made the comments, Mr Johnson told reporters in Wrexham: ‘No, but I think the important thing I think people want us to get on and do as a Government is to make sure that the lockdowns work.’

In the Commons Michael Gove said it was ‘incredible’ to suggest the Prime Minister would have used such language and fellow minister Nadine Dorries branded it a ‘lie’.

But ITV political editor Robert Peston said two eyewitnesses, neither of whom had spoken to the Mail, confirmed that Mr Johnson had made the outburst following a tense meeting to agree the second lockdown in October last year.

News of the Covid clampdown was leaked to the Mail last October just hours after the decision was taken.

The leak infuriated the PM who told the Cabinet Office to launch an investigation to hunt down the so-called ‘chatty rat’ who leaked it.

Last week, Mr Johnson ordered an extraordinary briefing war against Mr Cummings, in which his former aide was accused of being behind the leak.

The former Vote Leave chief responded with an explosive 1,100-word statement in which he said both the Prime Minister and Cabinet Secretary Simon Case had exonerated him of involvement.

Mr Case did not dispute this claim yesterday.

But he denied Mr Cummings’s allegation that Mr Johnson had tried to block the investigation after learning that a close friend of his fiancée Carrie Symonds had been implicated.

He told MPs it was ‘probable’ that investigators would never be able to determine who leaked the story, despite bringing in MI5 to help track the mobile phone data of senior ministers and officials.